5 of the Best Halloween Costumes for ‘Star Wars’ Fans

Halloween is just around the corner, which means it’s time for you to start preparing your perfect costume. While traditional Halloween costumes tend to focus on the creepy and supernatural aspects of the holiday, nowadays celebrants can disguise themselves as everything from famous Internet memes to characters from their favorite movies. This Halloween — with the premiere of Rogue One: A Star Wars Story just weeks away — is the perfect opportunity to indulge in your Star Wars fandom by dressing up as your favorite character from the sci-fi saga.

Whether you are looking for an old-school character like Darth Vader, or are ready to try out one of the more recent characters featured in The Force Awakens, such as Kylo Ren, we have assembled five of our favorite Star Wars costumes that are currently available. Happy trick-or-treating, and may the Force be with you!

One of the most intriguing and mysterious characters in Star Wars: The Force Awakens is Kylo Ren. While little is known about his origins at this time, StarWars.com describes him as “a dark warrior strong with the Force” who “commands First Order missions with a temper as fiery as his unconventional lightsaber.” And he looks pretty damn cool too, we might add. Bring a “dark warrior” vibe to your Halloween party with this Deluxe Adult Kylo Ren Costume that includes a robe, a hooded cape, a belt, and the character’s distinctive mask. Just remember you’ll still need to provide your own black pants and boots to complete the look. You’ll also want to add Kylo Ren’s unconventional three-bladed lightsaber to your ensemble. You can find the Star Wars: The Force Awakens Deluxe Adult Kylo Ren Costume here and the red three-bladed lightsaber here.

Indistinguishable and anonymous, the original Stormtroopers were the shock troops of the now fallen Empire. And while their armor may not offer protection from blaster shots (or even Ewok spears); there’s no denying the fashion appeal of their iconic outfits. This high-quality movie-accurate Stormtrooper costume has everything you need to take on Rebel scum, including a black polyester bodysuit, EVA molded armor pieces, a two-piece helmet, and a standard issue blaster rifle. Who knows? This Halloween you may even finally find those elusive droids you’ve been looking for. You can find the Star Wars Supreme Edition Stormtrooper Costume here.

Who wouldn’t want to be Chewbacca? Han Solo’s loyal sidekick is one of the most beloved characters in the Star Wars saga and — thanks to his natural fur coat — one of the only characters who doesn’t have to ever worry about updating his wardrobe. Now you can stay warm like a Wookiee this Halloween with the officially licensed Supreme Edition Episode III Chewbacca Costume. Besides the fur-covered body suit and mask, this costume also includes Chewbacca’s iconic bandolier and carrying pouch. As Chewbacca would say, this costume is “Grrrwaaaaaargh!” You can find the Star Wars Collector Supreme Edition Episode III Chewbacca Costume here.

With his labored mechanical breathing and his iconic black helmet, Darth Vader is not only one of the most recognizable characters in the Star Wars saga; he is also one of the greatest movie villains of all time. Join the dark side of the Force this Halloween with this officially licensed Collector Supreme Edition Darth Vader Costume. Featuring components created from Lucasfilm’s original molds, this costume is virtually indistinguishable from the movie version. It even includes a built-in voice device for the helmet and light-up electronic components on the belt and chest plate. All you need to complete the ensemble is a pair of black boots, a lightsaber, and an undying hatred of the Rebel Alliance. There’s no need to tear the ship apart: You can find the Men’s Star Wars Collector Supreme Edition Darth Vader Costume right here. 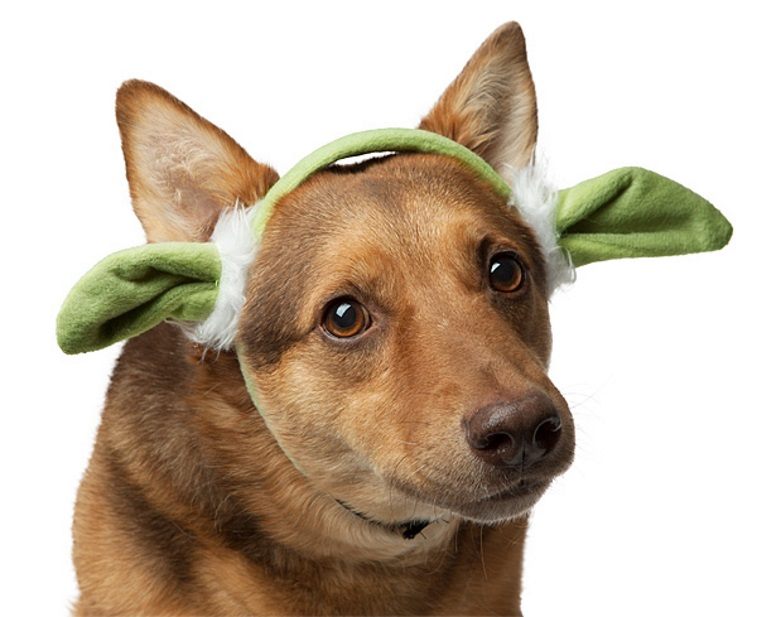 While there’s no denying that movie-accurate costumes look awesome, you don’t necessarily have to spend hundreds of dollars in order to recreate the look of your favorite Star Wars character. In fact, you don’t even need to dress up. These Yoda Ears for dogs are a simple and economical way to get your pooch the Halloween spirit and to show off your Star Wars fandom all at the same time. The Star Wars Yoda Ears for Dogs certainly won’t have people mistaking your puppy for the short-statured Dagobah denizen (unless they’ve had too many hookah hits at the cantina), but it’s still a fun way to pay tribute to one of the franchise’s greatest characters. These distinctive pointy green ears feature a elastic chin strap and will fit most small or medium sized breeds. You can find the Star Wars Yoda Ears for Dogs right here.