We could all use a little extra cash, couldn’t we? The same goes for video game makers, some of whom have inked deals with advertisers to promote products in their games. Product placement in games is nothing new, and sometimes it makes sense, like when brands advertise on the sidelines in sports games, or when automobile manufacturers pay to put their cars in racing games.

Other times the results can be jarring. Here are five examples of in-game product placement that made us scratch our heads.

There’s very little in Mario’s Mushroom Kingdom that has anything to do with the real world. After all, the dude rides a dinosaur and touches mushrooms to double in size. But that didn’t stop Nintendo from signing a deal with car maker Mercedes-Benz to plug luxury vehicles in Super Mario Maker for Wii U.

The partnership resulted in a level called “Mercedes-Benz Jump’n’Drive,” which features a Mercedes-Benz logo made from Mario blocks, as well as a special mushroom that makes Mario look like one of the company’s SUVs. Beating the level lets you use the car costume in levels of your own making. Weird.

Sony and the sandwich shop Subway teamed up in 2011 for the release of Uncharted 3, a game about the thrill of hunting for treasure in the farthest reaches of the natural world. That might not seem like an ideal fit for a fast food restaurant tie-in, but the two companies went ahead and did it anyway.

Not only did the deal result in the cringe-worthy commercial above, but it also put Subway-branded items in the multiplayer mode of the game. Because who doesn’t want their in-game avatar to sport the brand of everyone’s favorite sandwich joint?

Tech companies love putting their products in the hands of TV and movie characters. That’s why James Bond drives an Aston Martin and uses a Sony phone. So with video games reaching ever greater levels of realism, it only makes sense that game characters would start using branded products as part of product placement deals.

That’s what happened in Alan Wake, a horror game about a writer who may be losing his mind. Despite having a missing wife and apparently having penned a novel he can’t remember writing, he still manages to use a Verizon phone, to drive by numerous Verizon billboards, and even to sit through a Verizon commercial loudly playing on a television in the game. Product placement or terrifying nightmare? You be the judge.

Playing a massively multiplayer online RPG can be grueling work that requires long hours and deep attention. So when mealtime comes and goes, players often find themselves with a rumbling belly. That’s why Sony threw gamers a bone and let them order a real-life pizza to their house from within the fantasy world of the game.

To do so, you just had to type “/pizza” into the command line, which would bring up the ordering page of Pizza Hut’s website. It may not have fit in the game’s sword-and-sorcery setting, but if you think about it, it’s kind of like a magical spell that summons food. 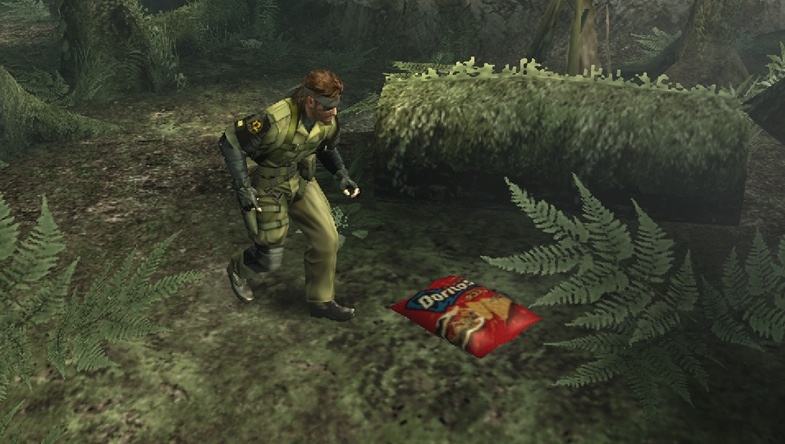 There’s a persistent stereotype that gamers are losers who drench themselves in Axe Body Spray while chugging Mountain Dew and eating Dorito crumbs off their chest. Konami decided to lean into that viewpoint by partnering with all three companies for product placement in its portable Metal Gear Solid game on PSP.

Not only can you find those products floating in mid-air in the game itself, but you can also dress Snake in t-shirts featuring all of the brands’ logos. And you thought you’d seen it all.