5 Reasons Fans Are Freaking Out About ‘Dragon Quest XI’

The 11th installment of the main Dragon Quest series has been announced, and fans are freaking out. If you’re not familiar with the series, you’re probably wondering what all the fuss is about. Brace yourself, because the fuss is warranted.

First, the basics: So far, Dragon Quest XI has only been announced for Japan. There’s a good chance that it will make its way to Western shores — which we’ll get into below — but it’s not guaranteed.

The game will be available for PlayStation 4, Nintendo 3DS, and the Nintendo NX, a system we won’t know much about until 2016, when Nintendo unveils it.

The big question for newcomers to the series is why Dragon Quest XI is making such a big splash. Here are five reasons.

1. It’s been a long time coming

The last time fans in the West got a core Dragon Quest game was in 2009, when Dragon Quest IX came out on the Nintendo DS.

Dragon Quest X skipped a U.S. release entirely. Fans might have made a fuss, but their disappointment was tempered because DQ X was an MMO rather than a single-player RPG like all of the rest of the games in the series.

Since it’s been six years since we’ve gotten an all-new core Dragon Quest game, fans are ready to dive back in.

The PlayStation 4 version of Dragon Quest XI will be based on the powerful Unreal Engine 4, which means it will look like a big, gorgeous modern-day game. Watch the video above to see an early build of the game in action.

That stands in contrast to Dragon Quest IX, which came out on the tiny, underpowered Nintendo DS. The last time we got a console installment was Dragon Quest VIII, an epic, classic PS2 game that came out in 2005.

Now all we need is an official announcement that the new game is coming to the U.S.

3. It will almost certainly come to the U.S.

Square Enix announced that Dragon Quest XI is coming to the PS4. That means it’s practically a given that it will make its way to the West.

The PS4 is selling in crazy numbers in the West, but that’s not the case in Japan. By most reports, of the 23 million PS4s sold, fewer than one million have sold in Japan.

For Square Enix to make any money on the PS4 version at all, it will pretty much have to bring the game to the West.

On the 3DS, the top screen will show a 3D polygonal version of the game, while the bottom screen will show the exact same thing, but from a top-down view, with retro-style graphics. That sounds bizarre, but maybe it will make sense once we know more.

One caveat: 3DS owners shouldn’t get their hopes up too high for this game. It’s much less certain that the 3DS version will make it to the West, seeing as Square Enix has decided not to bring the last four Dragon Quest-branded 3DS games over here. The 3DS is a much bigger deal in Japan than it is here, so we may only get the PS4 version.

5. The series is reliably great 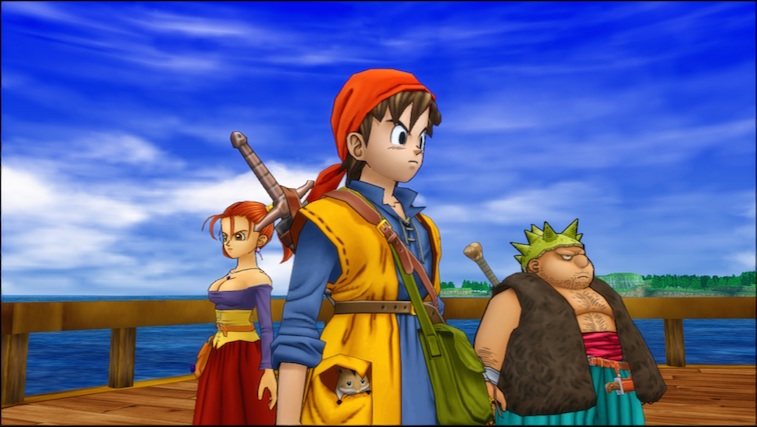 When it comes to Japanese role-playing games, Dragon Quest is one of the oldest series still around. It even predates Final Fantasy by a year (the first installment launched in 1986). But while the Final Fantasy series continued to try new things and introduce vastly different settings for each installment (with varying results), the Dragon Quest games have never really strayed from their comfort zone.

The art style is friendly, the plots are compelling, the characters are interesting, and the setting is a colorful fantasy world. For fans of the series, each new installment is like the video game equivalent mom’s home cooking. It’s reliable, and you always know it’s going to be great.

And no discussion of the world of Dragon Quest would be complete without mentioning the fantastic monster designs. The beasts that populate the wildernesses of the Dragon Quest series are some of the most memorable enemies of any game. From slimes to jokers, they’re all highly imaginative (and often adorable).

If you have any doubts, or you’ve never played a Dragon Quest game before, go ahead and pick up Dragon Quest IX on Nintendo DS or any of the other DS or iOS ports. They’re all great, but V, VIII, and IX are the standouts.