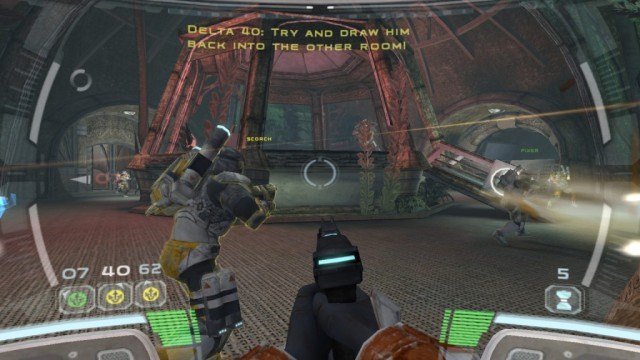 Disney has done a lot of retail business thanks to the newest installment of the Star Wars saga, but while it has released one (arguably two) games in conjunction with the film, the studio hasn’t talked much about what’s next for the interactive side of Star Wars entertainment.

That’s a bummer, especially given the number of fantastic Star Wars sub-franchises that dominated the gaming landscape for so many years. Many of them told stories that filled in gaps, or added new universes generations before or after the films.

Some of that stuff is no longer canon, but many of the game franchises would be met with welcoming audiences if they were continued, especially given the cliffhangers left by some of the titles.

While there are plenty to be considered, we picked out five favorites that deserve sequels if Disney has a heart hidden anywhere in its many theme parks. Sadly most of them are likely not to ever be made, but here’s one more plea for a few exceptions.

1. Knights of the Old Republic

The gigantic, sprawling time-suck of an RPG took us to planets familiar and new thousands of years before Luke would blow up a death star. Lightsabers abounded, as did Force users and bullies. And the first and second installments were tightly knit, even though you made so many open-ended choices for your character and the fate of the galaxy in both games.

Sadly an MMORPG was the response to our need for a finale to the trilogy — one taking place long after the events we set in motion. Did it satisfy many of our needs? Sure. But we wanted more of the same, not a new frontier. There’s still time to add one final Jedi betrayer to the mix and give them all a chance for redemption.

The descendant of many years of attempts to bring space dogfighting to life, Rogue Squadron was a limited but amazing game. You were landlocked, but able to pilot iconic ships through challenging combat and escort scenarios that never felt repetitive. With the sequel you got bigger environments, better graphics, and (finally) fights in space.

Battlefront took on some of the responsibility for making vehicle combat available to the masses, but as a member of the Rogues you really had a different experience: one with a story, not just constant circles of multiplayer combat. If anything is needed right now, it’s a lightsaber free flying game like this one to return on modern technology.

The game that pioneered aspects of 3D multiplayer combat and gave us our first real chance to handle a lightsaber in a video game environment. All of the sequels improved on the model, adding freedom to the Force powers and layers to the complexity of the saber combat, without making it unpleasant to play. Especially in large groups, online, with modded maps and combat.

The story focused on different individuals, including Kyle Katarn (who may no longer exist in the new canon) but the last chapter left you with a new young Jedi to control. We want the rich storyline back, as well as the complex saber play for combat — the kind that made us feel like we were learning something, not just button mashing around some LEGO world.

The gritty, Call of Duty answer to the Star Wars question, this was the first game to ditch all those silly main characters and follow an elite squad of clone commandos through the events between episodes II and III. You had control over tactical maneuvers and were responsible for three teammates who could be assigned to cover fire, to heal you, to provide sniping support, or just to storm a room aggressively.

It was an edgy game ahead of its time, and deserved a well-thought-out sequel. We’d have liked to see resolution to its serious cliff-hanger where two of the teammates go radio silent, likely moments before the Jedi purge order is carried out.

This game featured a nearly unstoppable Force of light and dark energy, and a plot line that managed to weave the untouched sections of (what was previously) canon into a totally new and enriching story. And to top it all off, the controls were fun and the gameplay was great.

Yes it was linear, yes the puzzle jumping occasionally got a bit tedious. Yes, the second game was significantly shorter than we wanted it to be. But like many Star Wars properties before it, The Force Unleashed was designed for a trilogy, and not fulfilling that promise would be a disservice to the excellent characters and a set of game mechanics that finally made being a Force user in a game feel creative and nonlinear.

It’s a good time to bring these back into production, Disney. Search your feelings. You know it to be true.