5 Superhero Fights That We’d Love to See Go Down

2016 was the year of superhero showdowns. First, we saw Batman and Superman go toe-to-toe in Batman v Superman: Dawn of Justice. Two months later, Captain America went to war with Iron Man in Civil War, continuing the ongoing trend of seeing our favorite heroes throw down. There’s something about seeing comic book characters do battle, that otherwise would never oppose each other. Most often as children, we always wonder: Who would win in a fight?

That very question is one we ourselves have too, leading us to wonder about how other heroes in both the Marvel and DC universes would fare against each other. So, the parameters: Think Mortal Kombat. One predetermined neutral location, where two characters go at it until one surrenders. We’re skirting around things like studio ownership of heroes, despite the fact that we would love to see these brawls in theaters. In our hypothetical universe, a DC character is allowed to crossover into the Marvel world, and vice-versa. Additionally, we’re basing origin stories and abilities on existing TV and movie universes. First up…

In Civil War, Captain America takes on Iron Man, while the entire MCU is forced to choose sides in the process. But the real matchup we want to see is decidedly… different. Ant-Man is new to the MCU, but his character in the comics dates back decades. The two Avengers share a lot of similarities: Their respective suits were created by scientific geniuses (Hank Pym for Ant-Man, Tony Stark for Iron Man), and both possess rare technological abilities that only they can control. In the Civil War comic saga, they fight on the same side against Cap. But imagine the battle of minds that could ensue if the two turned on each other.

The Victor: Iron Man. As we saw in Ant-Man’s debut movie, anyone with advanced enough technology to see Ant-Man move around in his shrunk-down form carries a distinct advantage. Combine that with Tony Stark’s considerable ingenuity, as well as the fact that Scott Lang, not super-genius Hank Pym, currently occupies the suit, and it’s a clear win for Iron Man.

This particular battle pits two martial arts experts against each other. Both Daredevil and Black Widow are skilled ninjas, having trained and honed their skills since childhood. Daredevil, while blind, possesses super-senses that make him incredibly hard to contend with in a one-on-one matchup. Throughout his first season on Netflix, we witnessed him spend the better part of every episode getting the living tar beat out of him, and still getting up to finish his fights. Black Widow on the other hand has shown considerable agility, strength, and stamina in a drawn-out battle, having been recruited as a child to train as a Russian fighting machine.

The Victor: Black Widow. When it comes down to it, Natasha Romanoff is Daredevil’s equal in martial arts, and has proven herself over and over again to be on par with any of the Avengers (Hulk-excepted). It may take awhile before Daredevil goes down, but eventually Black Widow would come out on top.

We know what you’re thinking: Shouldn’t Green Arrow be fighting his Marvel counterpart, Hawkeye? Possibly, but we feel as though Batman is a better match. If we’re going off of the TV Green Arrow, and Batman circa-The Dark Knight, we have a perfect alignment of characters. Greg Berlanti’s CW Green Arrow spent 5 years perfecting his skills in the wilderness of a hellish island, and then trained under none other than Batman’s own cinematic sensei, Ra’s Al Ghul. Both Oliver Queen and Bruce Wayne are orphaned billionaires with toy chests full of gadgets funded by their family companies. In a whole lot of ways, it’s the perfect fight.

The Victor: Green Arrow. Batman may be the world’s greatest detective, but the Green Arrow of the CW universe has proven able to KO anything R’as Al Ghul’s League of Assassins can send his way. Conversely, we’ve seen Bane straight up snap Batman in half, giving a clear advantage to the ingenuity of a Green Arrow who’s even topped The Flash in hand-to-hand combat. 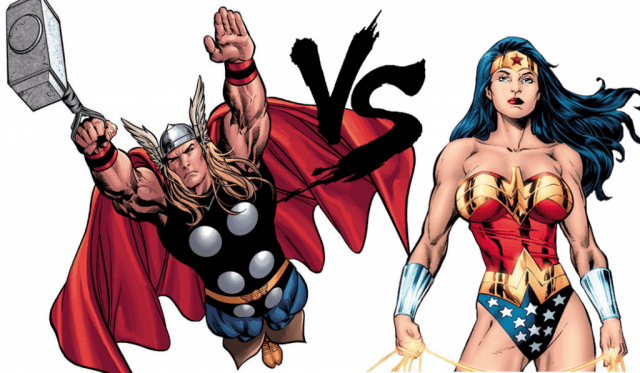 Both Thor and Wonder Woman are born of ancient religions: The former from Norse mythology, and the latter from the Greeks. Thor comes straight from Asgard, as the god of thunder and rightful heir to the throne of Odin. We’ve rarely seen him bleed, much less struggle in a knock-down drag-out brawl. Wonder Woman we have yet to see officially appear in anything that isn’t a trailer, but her prowess as a warrior possessing the strength and abilities of the Greek pantheon of gods is undeniable.

The Victor: Thor. Much of this is based on the fact that we have a clear definition of just how resilient and nigh immortal Thor has proven to be. Although Wonder Woman could very well prove herself as superior to the god of thunder, for now, things swing in a decidedly Asgardian direction.

If we’re being entirely honest with ourselves, Batman taking on Superman is a mismatch. Barring the presence of Kryptonite, the Man of Steel is indestructible. But pair him with a similarly sturdy hero and we could get the fight that’s really worth seeing. In the comics, the Incredible Hulk’s strength increases exponentially with his anger, something that seems to align directly with what we’ve seen in the MCU. We have yet to see anyone really subdue the Mark Ruffalo version of the Hulk (we’re still unclear on how Tony Stark managed to finish him off in Age of Ultron), but if there’s one superhero that can, it has to be Superman.

Victor: Superman. One animator sought to answer this question awhile back, and came to the same conclusion as us: Superman’s ability to think and strategize, along with his other abilities as well, give him a decided advantage over the Hulk’s more mindless attack.