5 Things We Learned From the New ‘Ant-Man’ Trailer

Marvel is nothing if not stacked when it comes to its roster of upcoming superhero movies. Over the next couple of years, we have the new Avengers, soon to be followed by the much-anticipated Civil War storyline for Captain America.

Along the way, though, it’ll be moving forward with one of its odder choices for an adaptation in the form of Ant-Man, starring Paul Rudd as the title character. The production for this one has been nothing short of chaotic, with Edgar Wright (Hot Fuzz, Shaun of the Dead) having signed on as the original director. Wright eventually left the project due to creative differences after spending years trying to push his vision through the Marvel higher-ups.

After Wright’s departure, the studio brought on the decidedly less exciting Peyton Reed as a replacement, a director mostly known for Bring It On and with no superhero or sci-fi movies to his name. This in turn has led to what many are describing as an issue in tone that cropped up in the wake of the directorial transition. No one is quite sure what Ant-Man will be like, but the newest trailer that just released attempts to answer at least some of those questions.

1. We get our first look at Corey Stoll as Yellowjacket

In the comics, Yellowjacket is more an alternate alias for Hank Pym, the original Ant-Man. In the movie universe, though, he’ll be a full-on villain for our hero, Scott Lang (played by Paul Rudd). The new trailer gives us a good look at what he’ll look like, showing a terrifying yellow suit that at least on film looks intriguing. We’ll have to wait to see just how Stoll does in his first run in a Marvel movie, but early returns look promising for him at the very least. 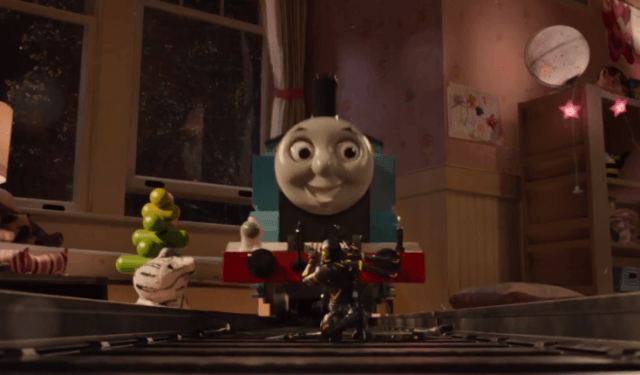 2. The tone seems just as confused as we feared it would be

Back when this was Edgar Wright’s project, there was a general consensus that Ant-Man would definitely carry a smoothly laid-out comedic tone. But with Wright departing after having done a large portion of development for the film, there were always going to be issues in that department. Maybe it’s simply an issue with the way the trailer was cut, but the oscillating between shoehorned jokes and a more serious atmosphere is more than a little awkward. The hope, naturally, is that this won’t carry over to the finished product. Perhaps Reed took this as his moment to show his true mettle as a director, although Ant-Man is at its core a movie borne of two separate creative visions.

Up until now, we haven’t seen much of the Ant-Man suit in action. The new trailer answers many questions about Ant-Man’s abilities by showing the superhero throwing around baddies in all his microscopic glory. Part of what makes the hero compelling in the comic books is his diminutive status still allowing him strength well beyond that of his full-size enemies. Imagine trying to fight someone the size of your fingertip who’s as strong, if not stronger than you are. That’s where Ant-Man has a chance to really shine in a unique way, and visually, the filmmakers have a lot to work with in this department.

It may have been a throwaway line, but in one quick instance in the trailer, we hear Michael Douglas telling Rudd’s character that he’ll need to break in to somewhere and steal something. Given Scott Lang (played by Rudd) is a criminal by trade, our best guess is that he’ll be tasked with stealing the Ant-Man suit that for whatever reason we assume Hank Pym (Douglas) no longer has access to. This could in turn lead to a large portion of the movie taken up by Lang utilizing his thief-centric skills to organize a heist at the behest of Pym.

5. We finally have Ant-Man’s powers laid out for us

It was initially unclear as to what elements of the original Ant-Man would make it into the movie, but thanks to the all-too descriptive voiceover of Evangeline Lilly, we now know. Basically, Lang’s version of the hero will (1) Be able to control ants with the aid of his suit and (2) Have the ability to shrink down to insect sizes while still retaining his full-size physical strength. We’re certain other parameters will show up in the finished product. All the same, it appears to be keeping most of the spirit of the comic books alive in the simple execution.