5 Trilogies That Prove More is Better

For those who believe one movie just isn’t enough, trilogies offer the perfect fix. Each film gives us more insight into the characters we’ve grown fond of and adds more depth and background to the plot lines. Here are five perfect examples of well-done trilogies, which were ranked based on their Rotten Tomatoes‘ Tomatometer scores. Just a warning — once you start watching one, there’s a good chance you’ll have to see them all.

Mad Max was released in 1979 and received a 95% on the Rotten Tomatoes’ Tomatometer. The movie stars Mel Gibson as Max Rockatansky, a post-apocalyptic policeman who is tired of his job. He dreams of retiring so he can spend more time with his wife and son, but that dream is shattered when a gang murders his family in retaliation for the death of one of its members. Max then embarks on a revenge journey, determined to kill the people who took his family from him. Mad Max 2: The Road Warrior was the second film in the trilogy and received a 100%. It takes place several years after the deaths of Max’s family. In the movie, he is portrayed as an alienated wanderer who eventually unites with a group of people to fight a band of evil nomads led by a man named Humungus.

Finally, the third installment, Mad Max Beyond Thunderdome, received an 81%. It occurs about 15 years after the events that take place in Mad Max 2. This time, things look even more desolate due to a nuclear war that has destroyed the rest of civilization. Max is again wandering around the Australian desert, and eventually ends up in Bartertown, which is overseen by two rulers: Aunty Entity and Master. Max strikes a deal with Aunty and agrees to fight in a ritualized combat. However, after he realizes his opponent is actually a child, he refuses to kill him, per Rotten Tomatoes. Aunty’s men murder his young opponent anyway, and Max is punished by being sent out into a sandstorm.

He’s rescued by a band of tribal kids and teens, who are the descendants of victims of an airplane crash. When a few of the kids wander off to seek out civilization, Max and a few of the other tribe members must rescue them from Bartertown and Aunty Entity.

Needless to say, there is no shortage of action in any of these films. A Slant review states: “The Mad Max trilogy is the work of a talented virtuoso who blended seemingly every trope of every movie genre into a series of punk-rock action films.” And what could be better than a trilogy of Mad Max movies? How about a quadrilogy?  Although last year’s Mad Max: Fury Road is more a reboot than a sequel, it could be considered a continuation of the first three films.

4. The Lord of the Rings 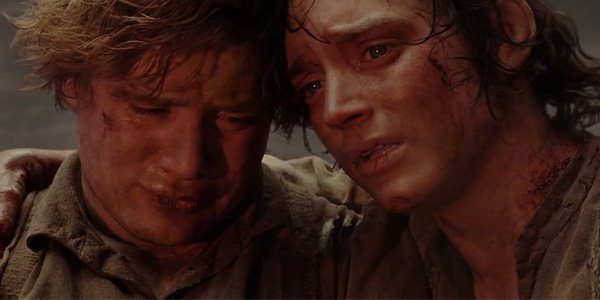 The Lord of the Rings | Source: New Line Cinema

The Fellowship of the Ring received a 91% on the Rotten Tomatoes’ Tomatometer and was the first film in The Lord of the Rings trilogy. In the movie, Frodo Baggins embarks on a dangerous journey to take the One Ring to Mount Doom, so that its magical powers can finally be destroyed. The Lord of the Rings: The Two Towers, which received a 96%, picks up with Gollum, Frodo, and Samwise pressing on toward Mordor. As the ring starts to corrupt the group of travelers, many questions arise: Can Gollum be trusted? Is the ring consuming Frodo as well? Meanwhile, Aragorn is gathering troops to help him fight a battle that will inevitably occur.

The third film, The Lord of the Rings: The Return of the King, which received a 94%, centers around the final battle for Middle-Earth, and follows Frodo, Sam, and Gollum as they continue their trek toward Mount Doom in order to destroy the One Ring. Each installment paved the way for the next, and many believed that the films were able to do the books the justice they so greatly deserved. The Deseret News reports that this trilogy earned nearly $3 billion altogether, received more than 250 film awards, and has been “hailed as the greatest film trilogy of this generation.”

A Fistful of Dollars received a 98% on the Tomatometer and was released in 1964. The second installment was 1965’s For a Few Dollars More, which received a 94%, and the third was 1966’s The Good, the Bad, and the Ugly, which was given a 97% on the Tomatometer. In the western-themed films, Clint Eastwood plays the “Man With No Name,” a cynical gunfighter who keeps to himself. In A Fistful of Dollars, Eastwood arrives at a small town and offers his services to two rivaling gangs. Neither is aware that he’s playing both sides, leaving both groups to feel as though they’re cleverly outsmarting him. But both sides quickly discover that they can’t outwit the “Man With No Name.”

In the second film, Eastwood joins forces with his nemesis, a bounty hunter by the name of Douglas Mortimer, to capture an outlaw named Indio, according to IMDb. In the final film, The Good, the Bad, and the Ugly, Eastwood is searching for stolen gold and must race against the clock to beat his rivals: The bounty hunter and the bandit. Interestingly, Nerdist notes that these hugely popular films drew inspiration from a classic samurai film, Yojimbo. “From the very start, these films were of uncommon pedigree. For an Italian filmmaker to remake a Japanese samurai movie in the form of an American Western must have seemed crazy, but in execution, it serves to illuminate both source and subversion,” Hitfix states.

The 1993 film Three Colors: Blue received a 100% on the Tomatometer. The film was about a French woman who loses her husband and child in a car accident. She determines the only way to get over her grief is to build a whole new life, which involves eliminating all memories of her late husband. The second feature in the Three Colors trilogy, Three Colors: White, received a 90% and was about a Polish hairdresser, Karol, whose wife divorces him after just 6 months of marriage. Karol becomes penniless and destitute and must find a way back to Poland without his passport. He ends up hiding in a trunk and along the way begins to hatch a revenge plot.

The final film in the trilogy, Three Colors: Red, received a 100%. A Chicago Reader review states:

The third and best feature (1994, 99 min.) of Krzysztof Kieslowski’s highly ambitious Three Colors trilogy concentrates on the theme of fraternity (Bluetackled liberty, White equality). The principal characters are a young student and model (Irene Jacob) and a cynical retired judge (Jean-Louis Trintignant) whose paths cross by chance in Geneva, and in a way their meeting comes to stand for a good many of the other accidental incidents threaded through this densely textured movie, including one that ties up many of the loose ends of the two previous films.

These films all contain excellent storytelling qualities and are able to hook you from the start. There’s a good chance you’ll find yourself watching them over again! 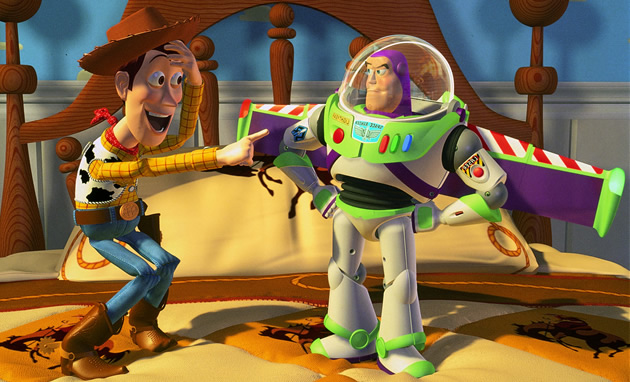 What’s not to love about a group of talking toys? In the first film, Toy Story, which received a 100% on the Tomatometer, Woody becomes worried that Andy’s new favorite toy is Buzz Lightyear. He plots to get rid of Buzz, but things don’t go as planned, and he ends up lost outside with Buzz as his only companion. Eventually, the two realize they must work together and a mutual respect forms in the process.

The second movie, Toy Story 2, also received a score of 100%. Woody is kidnapped by an avid toy collector, leaving the other toys to try and get him back before Andy returns from summer camp. Toy Story 3 was the third film and received a 99% on the Tomatotmeter. It fast forwards to when Andy is headed to college and his toys find themselves in daycare, where they must deal with a bunch of toddlers who don’t play nice.

At the time of its release, Toy Story 3 quickly became the highest grossing animated feature in history (it was eventually surpassed by Frozen). Wondering why the third film was so popular? Screen Rant speculates that it’s because viewers were able to build a connection with the characters through the years, meaning that almost anyone who had watched the other two films wanted to see the third installment — in 3D — as well. There’s even more good news, Toy Story fans — The Los Angeles Times reports that Toy Story 4 is in the works and is set to be released in 2017.