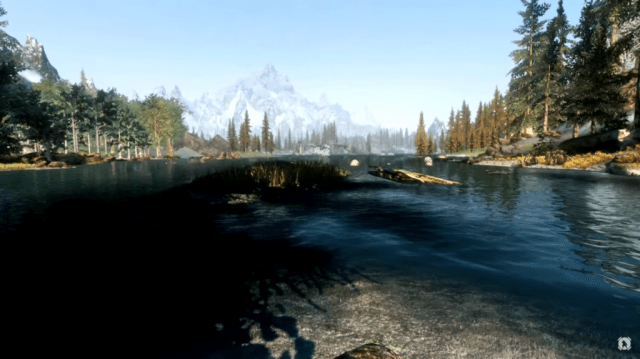 Video games look better every year, and if you need that proven, look at screenshots from every iteration of Madden next to one another.

But while studios may work their asses off to provide you with the best player experience they can create, sometimes it’s a third party that really pushes things to a whole new level. Modding is a well-established part of the PC gaming world, and lately the home designers have really been outdoing themselves.

We curated visual tours of well-known games that have received visual upgrades so stunning that (if you ignore the HUD) you might not be sure you’re looking at a game.

Modding games is about more than top-to-bottom improvements. A lot of small details can really change the way things look and feel. Fallout: New Vegas is a great example. This game is greatly improved, to the point of making you do a double take, from just a few changes.

Here’s a narrated tour of some of the coolest things from Fallout: New Vegas. Mods for this game focused on weather and skyline improvements (It’s the desert, so there’s a lot of blue sky) and better textures on the sparse foliage.

A lot of care was taken over bright lights. Note the glare from the sun and neon lights, and how they change as you track across the screen. Some things are more stylized than realistic, but that same amount of choice goes into movies these days, so we’re not objecting.

Witcher 3 is already a gorgeous game, but a little tweak takes that beauty a lot further.

This is a subtle change, but it shows how little is really necessary to change the visuals of a game. Rather than adding additional textures, this mod simply changes the color balance, cutting back on autumnal yellows and adding some blue that brings out the sky and enriches the other colors.

The result is that an already pretty game looks just a bit more uncanny, without really damaging playability. Many mods (the rest in this story included) require lots of processing power and tweaks to the game’s inner workings, so it’s worthwhile to commend someone who makes this much of an improvement with such a small change.

Many would argue that Elder Scrolls sequel Skyrim is one of the crowning achievements in gaming history. It hit the market with beautiful graphics and seemingly endless playability. The game has aged well, but the PC version has found new life as countless thousands of modifications have changed the way it looks, plays, and functions.

This video, produced nearly four years after the game was first released, shows over 300 modifications that add movement to grasses, change the texture of water, liven up sunsets, and generally make the game that wowed in 2011 wow again, now.

OK, part of the charm of Minecraft is its seemingly simple visual style and the cartoonish lack of realism of a do-anything sandbox. But we’d argue that, as a game designed to let people be creative, Minecraft is the best platform for mods.

Mods have sent mine crafters to space, added dinosaurs, and in this particular case, made the charmingly blocky little world beautiful without sacrificing what makes it so fun.

No, you can’t look at this game and be tricked into seeing real life, but if you pull in close enough on certain details, it does get a bit hard.

We’ve been showing a lot of gorgeous renderings of countrysides and rolling hills, and some of it can be very peaceful. But not every mod is about beauty. ARMA 3 is one of those games known for its realism in combat simulation.

Some additional modifications make the visuals less washed out and more vivid, and make smoke and explosion rendering look much more realistic.

Sure, things are less confusing in a game rendering than in real footage of combat scenarios, but a game still needs to be playable. Let’s just say that thanks to a couple upgrades, these graphics rival some of the most “realistic” war films of the last decade.