5 Ways DC and The CW Built a TV Superhero Empire

It’s no secret that Marvel Studios has built one of the most successful and expansive movie franchises ever made. Staring with Iron Man, it has hauled in billions of dollars over the years, bringing treasured superheroes to life on the backs of some of Hollywood’s most creative writers and directors. Its unified vision for its movies has been unparalleled, making for a masterclass in world building. It has since expanded into television with Agents of SHIELD and Agent Carter, but for intents and purposes that medium still belongs to someone else.

It all began back in 2012, when the very first season of Arrow debuted on The CW. It was a bold idea at the time, given that the last time a DC hero had his own TV show, the year was 1991. Since then, the empire has expanded into the even more popular The Flash and the soon-to-be-aired Legends of Tomorrow. Meanwhile, CBS just picked up a full order for Supergirl, dropping a hefty $14 million on the pilot episode alone. Gotham just wrapped up its inaugural season over on FOX, rounding our DC’s television empire spanning three major networks. So what got them to this point?

1. The perfect timing for Arrow

Let’s observe for a moment the climate Arrow came into in its first season back in 2012. Marvel had just wrapped up Phase 1, concluding with the first Avengers movie. Later that year, DC saw its famously gritty Dark Knight trilogy come to an end. The tone for DC was rooted in the morose and melancholic, playing against Marvel’s more upbeat, comedic style. In keeping with the former of these two tones, The CW debuted Arrow. From the very first episode, our titular hero falls firmly in the “tortured and broody” category, setting a tone consistent with The Dark Knight Rises.

Of course things were helped along by the Batman-esque premise of Arrow: The heir to a billion-dollar family watches his father die, disappears into East Asia to become a ninja, and returns home determined to clean up his corrupt city. Jumping off that premise, the show has since set itself apart as its own unique property, setting the tone for the ensuing DC television empire.

2. Focusing on the secondary heroes of the DC universe

DC has long made its buck riding the Batman/Superman train as far as it would take them. Together, those two characters are arguably the most iconic heroes ever to grace the pages of a comic book, so it’s no wonder the focus has always been on them. Conversely, Marvel has succeeded off of focusing on heroes many are unfamiliar with, a strategy that in turn inspired The CW. Rather than yet another Batman/Superman spinoff, the decidedly secondary Green Arrow and Flash characters made it to primetime.

Since then, both Arrow and The Flash have been heralded as the pinnacle for what comic book television should be, digging into a vast mythos of characters we’ve never seen fleshed out to this degree. While DC’s movie universe will continue to double down with Batman v Superman: Dawn of Justice, its diverse lineup of television is free to explore far outside their more mainstream heroes. 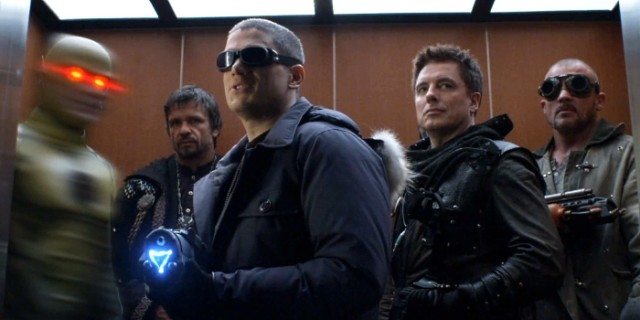 People love crossovers, plain and simple. It’s one of the reasons the MCU has been so wildly popular, and the same goes for The CW. There’s something about seeing characters from multiple shows and movies interact on each other’s turf that audiences just can’t get enough of. While Marvel rules the world of movies when it comes to crossover universes, The CW has a stranglehold on that honor on TV. The Flash and Arrow have already combined forces for a two-night crossover event, and have since continued to trade characters back and forth to emphasize the connection between the two shows.

This connection will only strengthen moving forward once Legends of Tomorrow comes to life. There’s a vast stable of other heroes that’s slowly accumulated on both Arrow and The Flash, so naturally the logical solution is to give them their own team-up show. This serves to increase the crossover potential, providing three unique worlds for our heroes to slip and out of at will.

4. The contrasting styles of Arrow and The Flash

CW’s first forays into their new world of superheroes make for a perfect yin and yang. On one hand, we have Arrow: a show that errs on the side of gravitas, featuring a generally humorless main character with some considerable emotional scarring. On the other, The Flash, an offering rife with comedic relief and a lighthearted approach to heroism. Each tone has its own merits, and together they complement each other in a way that makes it so fans can experience both sides of the same coin.

This in turn paves the way for shows like Supergirl and Legends of Tomorrow to go their own respective ways, with Gotham acting as the only real dud from DC so far in their otherwise successful run of shows. We imagine the symbiotic relationship The Flash and Arrow possess will be hard to duplicate elsewhere, but its mere existence has made the existence of future series possible.

No network will ever give a television series an Avengers-like budget. That being said, Marvel is attempting to at least approach that, with an estimated $200 million budget set to be spread across its five shows, for a total of 60 episodes. This all started though when DC decided to pour resources into bringing their shows to life. While exact numbers for their budgets aren’t readily available, the special effects used in all their shows point to significant levels of spending. Before Arrow, the best special effects we had in a comic book show were in 1990’s original Flash series, and 1975’s Wonder Woman.

Things have come a long way since then, with Arrow acting as a proving ground for whether or not a show like that could catch on as a viable concept. Obviously it did, and since then the money has been pouring in for each respective show.