The onslaught of video game releases continues this week as October begins and we transition into the always-busy fourth quarter of the year. It’s the months when games are launching left and right in hopes of scoring a spot in your collection, or at least under your Christmas tree. And they have more competition than ever before, thanks to major recent releases like Metal Gear Solid V, Super Mario Maker, and Forza Motorsport 6.

LEGO games have been coming out at a steady pace for nearly 20 years now, so it’s kind of surprising it took this long for the toy company to launch a “toys-to-life” game. Like Skylanders, Disney Infinity, and Nintendo Amiibos, this game will release alongside a line of toys you can place on a portal to bring them into the game. With sets based on licensed properties as varied as The Simpsons, Doctor Who, Ghostbusters, and Batman, this game will appeal to fans of all kinds.

Skating was all the rage at the turn of the millennium, thanks to the Tony Hawk’s Pro Skater series. The franchise petered out as the 2000s rolled on, but Activision is betting on a comeback with this sequel that it’s calling a follow-up to 2002’s Pro Skater 4. Basically, you’ll spend most of your time riding through skate parks, performing tricks and combos in an attempt to rack up a high score. If that sounds like fun, look for reviews before buying, because there are some indications this game won’t be all that great. 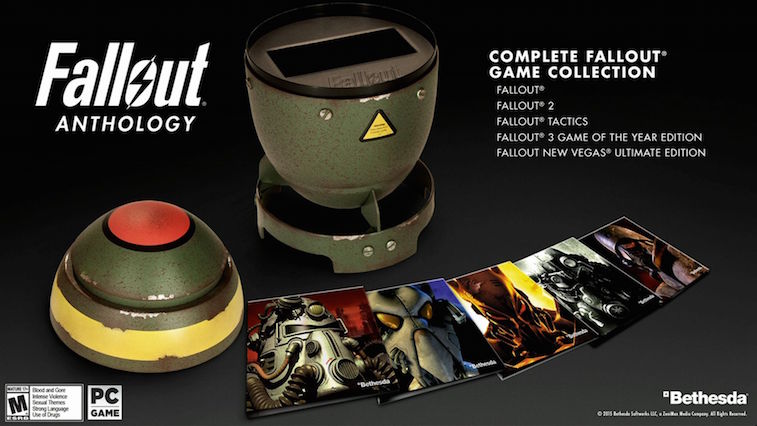 Fallout 4 is launching on November 10, which makes now a perfect time to brush up on the series. This anthology contains Fallout, Fallout 2, Fallout Tactics, Fallout 3: Game of the Year Edition, and Fallout: New Vegas Ultimate Edition. In other words, it has every game and every expansion ever released in the post-apocalyptic series. It comes in a plastic nuclear warhead, which fits the story but might make it tricky to bring on an airplane. If you do buy this anthology, you should know that each game will absorb many dozens of hours of your life. Plan accordingly.

It’s that time of year when each week a new crop of sports games comes out. This week is all about basketball, with two titles vying for dominance for NBA fans. NBA 2K16 is a realistic basketball simulation game that comes with a heap of modes that let you play one-off matches or let you guide a team through a season. This installment was also made with input from director Spike Lee, who helped shape the story of the MyCareer mode, which follows a player from high school to college and into the big leagues.

Electronic Arts’s take on the sport of basketball launches the same day as 2K’s. Also a realistic simulator, NBA Live 16 introduces a few new modes and features, including a totally revamped movement system that makes players more responsive than ever before. It also has a companion app that lets you scan your face into the game, so you can play as yourself. Keep an eye out for reviews of this and NBA 2K16 to see which one reigns supreme this year.

Developer Atlus scored a major hit with RPG fans with its 2008 game Persona 4. The game became so popular in part because of its cast of likable high school kids. To capitalize on those characters, Atlus has built a number of other games starring the same characters. This time around, the group of students has another supernatural mystery to solve, but instead of battling enemies with weapons, they use dance moves. It might be a tough sell for people who aren’t crazy about music games, but the early reviews have been very positive. If you feel the rhythm and you like Persona 4, be sure to pick this one up.