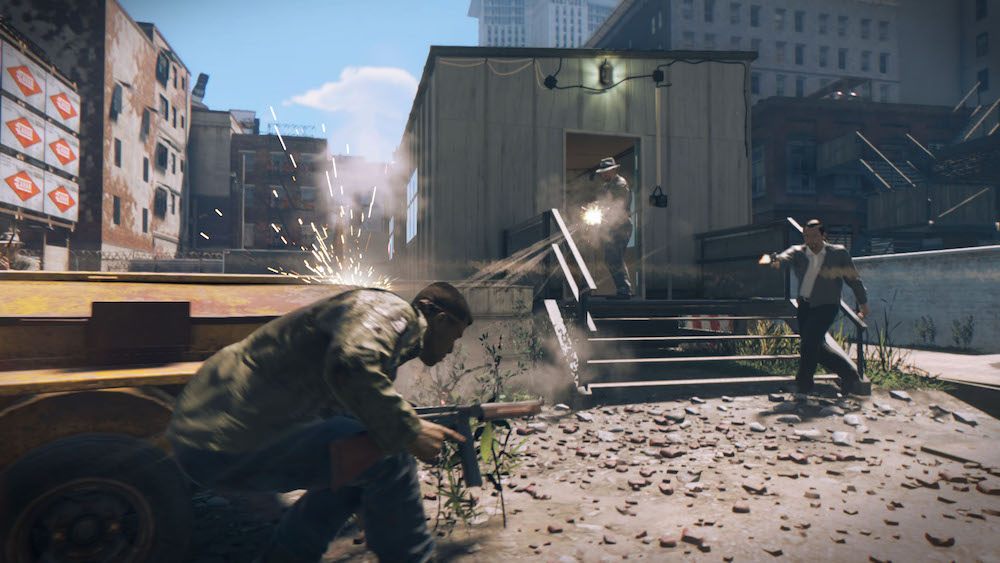 Let’s say you’re ready to move past recent games like Forza Horizon 3 and FIFA 17. You’re probably looking at the gaming landscape and wondering when something new worth playing will come out. Luckily, the answer is soon, because a number of noteworthy games are heading your way next week.

There’s a little something for everyone in next week’s games, whether you’re into music games, online shooters, or open-world action games. Read on for everything you need to know about the games launching the week of October 3, 2016.

Well this is bizarre. Companies don’t normally remaster games that came out two years ago, nor do they tend to release games with an outdated year in their titles, but this game does both.

Don’t let that weirdness turn you off of Rocksmith 2014 Edition – Remastered. The idea behind Rocksmith is that it’s like Rock Band or Guitar Hero, but you use a real guitar instead of a fake plastic one. If you’ve never picked up a guitar before, have no fear, because the game is more than capable of teaching you how to play. It costs less than music lessons, and if you stick with it, it actually works.

This new update, which is free for anyone who owns the original game, includes additional features like new practice tools, new stat tracking, improved menus, and six new songs. Check it out if you’ve always wanted to learn an instrument or just want to brush up on your skills.

This game’s been out for PC for a year, but now it’s making its way to consoles. It’s a first-person shooter set in the fantasy half of the Warhammer universe. Like Left 4 Dead, it’s an online-only shooter that has you team up with three other players to fend off Skaven, beastly orc-like creatures. Reviews were mostly positive for the PC version, but everyone notes that it’s not as finely crafted as Left 4 Dead. Then again, not many games are. Check out Vermintide if you’re in the mood for a co-op shooter and you don’t mind that it’s a little rough around the edges.

Most driving games are all about putting wheels on the road, and Wheels of Aurelia takes place on a road trip as a woman drives down the coast of Italy in the 1970s. This game is only partly concerned with the driving aspect, however — the other half of the game is devoted to an interactive story with pathways that you can choose yourself.

Depending on the choices you make, and which characters you pick up along the way, you could wind up in an illegal street race, in heated discussions, or being chased by the police. A single play-through only takes about 20 minutes, but with 16 endings, there’s plenty of replay value. If that sounds like your kind of thing, keep an eye out for reviews.

4. Slain: Back from Hell

If your love for heavy metal music is only matched by your appreciation for puzzle solving and retro action games, then you might want to take a look at Slain: Back from Hell. It looks and sounds fantastic (assuming you’re into crunchy, distorted guitars), but reviews were pretty tepid during the game’s original release. The developer promises that the big issues are fixed with this Back from Hell edition, but you’ll want to take caution before diving in on this one.

Set in a thinly fictionalized version of New Orleans, this mob game takes place in 1968. Your character is a Vietnam war vet who comes home to find out that most of his friends have been wiped out by Italian gangsters. Your job is to rise to the top of the criminal underworld, making alliances and severing them as you see fit.

Among the standard open-world tropes like missions and shootouts, you’ll find an engaging story that touches on issues like racism, corruption, and what it’s like to live on the bayou. Of all the games coming out next week, this one looks like the surest bet, particularly if you’re jonesing for a new Grand Theft Auto-style game.

The Paper Mario series of role-playing games has always been full of color and charm. Nintendo plans to bring those qualities to Wii U with an all new installment of the franchise that focuses on (you guessed it) splashing colors.

As always, the gameplay is 2D-meets–3D, with paper cut-out characters going on epic adventures in three-dimensional environments. All of the color is being drained from the world in this installment, so it’s up to Mario and company to use a device known as a “paint hammer” to bring it back. Be warned, though — the series’ last installment wasn’t so hot, and this one uses the same clunky combat mechanics. Read reviews before buying.