6 Things ‘Back to the Future’ Fans Must Have

If you understand the significance of reaching 88 mph in a DeLorean DMC-12, or know the purpose of a flux capacitor, then you are undoubtedly a fan of the cult comedy sci-fi film series Back to the Future. Starring Michael J. Fox as the time-traveling Marty McFly, Christopher Lloyd as the ingenious Doc Brown, and Thomas F. Wilson as the dimwitted villain Biff Tannen, the 1985 blockbuster movie spawned two highly successful sequels, an animated television series, several video games, and tons of related merchandise. With this year marking the 30-year anniversary of the original movie and October 21, 2015 being the day that Marty time traveled to in the second installment, there’s no better time than now to find a gift for the Back to the Future fanatic in your life. And while we were unable to find a working DeLorean time machine, we did find these six awesome gifts that will make any fan of Back to the Future exclaim, “Great Scott!”

While your electronic gadgets probably do not require a plutonium-fueled nuclear reactor in order to work, they still need power, just like Doc Brown’s time-traveling DeLorean. Now you can charge your cell phone in Back to the Future-style with the Flux Capacitor USB Car Charger. Featuring two USB ports for charging two electronic devices at once, this gadget is a miniaturized version of the flux capacitor used by Marty and Doc Brown in their DeLorean. And while this flux capacitor won’t send you back through time even if you hit 88 mph, it also doesn’t require 1.21 gigawatts of power. In fact, all it needs is your car’s 12V power adapter port. You can find the Flux Capacitor USB Car Charger here.

2. Outatime Back To The Future Aluminum License Plate 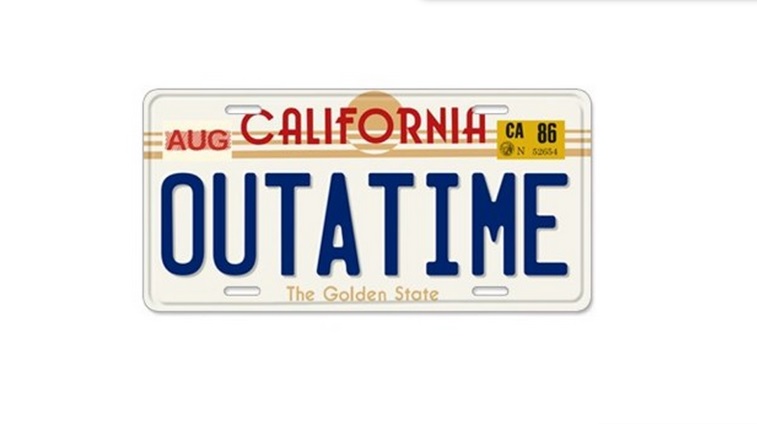 Besides outfitting his DeLorean with various high-tech additions, Doc Brown also found the time to order a clever personalized license plate for his vehicle that hints at its time-traveling capabilities. Now you too can decorate your car like a time machine with a replica of the “Outatime” license plate seen in the Back to the Future movies. This movie-accurate replica not only features the iconic “Outatime” slogan used on Doc’s DeLorean, it also includes little details like the ’86 California registration sticker.

Just remember to check that you live in a state that allows front-facing vanity plates before putting it on your vehicle. If you do put the plate on your vehicle, make sure it’s securely attached. As Doc Brown demonstrated in Back to the Future, this thing tends to come loose at around 88 mph. However, even if you don’t put it on your car, the “Outatime” license plate still makes a great collectible for Back to the Future fans. You can find the Outatime Back To The Future Aluminum License Plate here. 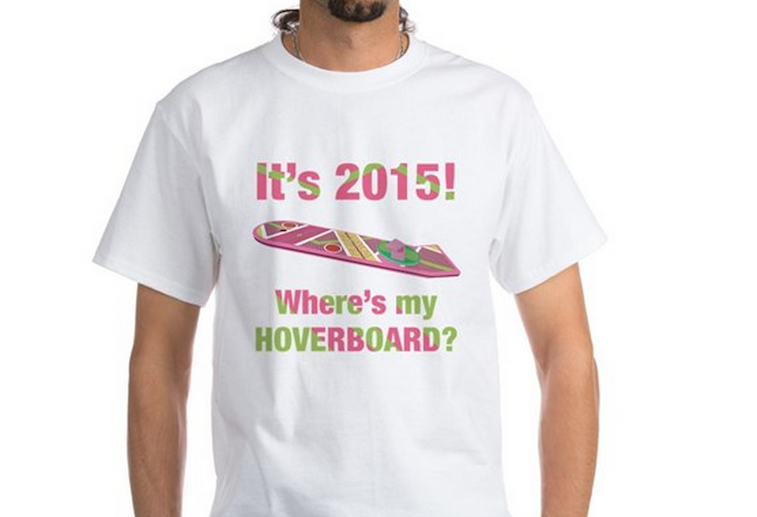 In Back to the Future II, Marty time-travels to the year 2015, where he finds and uses a hoverboard to escape a group of hoodlums led by Biff’s son. Of course, now that 2015 has actually arrived, it’s a little disappointing to know that hoverboards that operate like the ones seen in Back to the Future II have yet to be invented (sorry Hendo – it has to be able to work on regular street surfaces). The 2015 Hoverboard Shirt not only features a cool graphic of the Mattel-branded hoverboard that Marty “borrowed” from a young girl in the movie, it also lets today’s scientists (and everyone else) know just how you feel about the disturbing lack of hoverboards in the year 2015.You can find the 2015 Hoverboard Shirt here.

4. Back To The Future Desktop Hoverboards 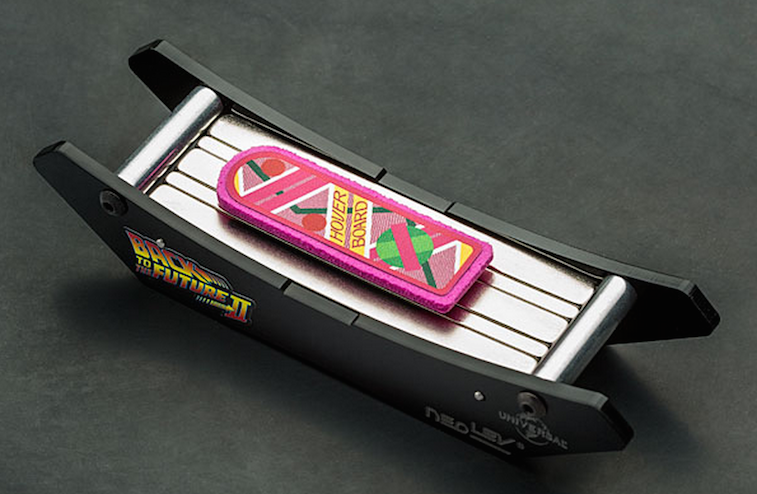 While you’re waiting for that full-size hoverboard to be invented, you can pass the time playing with this magnetically powered desktop version. Made of pyrolytic graphite (which is apparently not a made-up material), the hoverboard is suspended above a small curved track that is embedded with five rare earth magnets. Thanks to the curve in the track, the hoverboard will slide back and forth it you give it a tap. We know, it’s not as thrilling as being able to take a hoverboard out over the water, but you have to start somewhere. Warning: People with pacemakers or other medical implants should not get near these powerful magnets.  You can find the Back To The Future Desktop Hoverboard here.

5. Back to the Future 2 Light Up Shoes 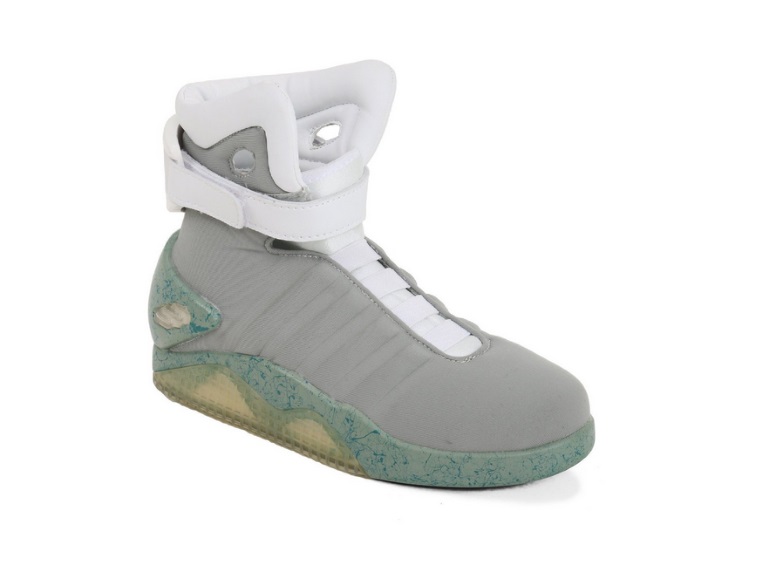 Besides making us all want a hoverboard, Back to the Future II also made us covet Marty McFly’s futuristic Nike MAG shoes. Although Nike sold a limited number of MAG sneakers for charity several years ago, those shoes sold for thousands of dollars each and are no longer available, except from private sellers. Fortunately, Universal Studios later issued another version that is still available and costs far less money.

These officially licensed shoes have the same design and color scheme as the pair seen in the movie –including built-in lights that can be recharged with the included cable and adapter. And although these shoes lack the Nike MAG logo and self-lacing ability seen in the movie, they do come packaged in a box emblazoned with the Back to the Future II logo. It’s 2015, so what are you waiting for? Get your pair of Back to the Future 2 Light Up Shoes here.

6. A Match Made In Space: A Journal Back from the Future 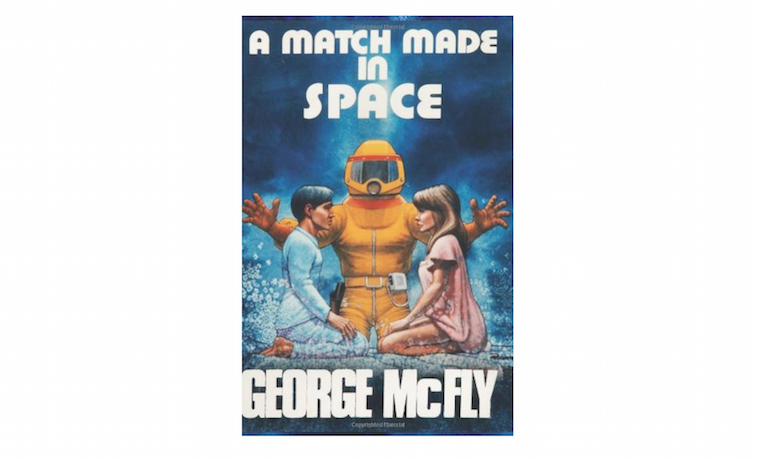 Before Marty altered the past with his time-traveling shenanigans, his father – George McFly – was a frustrated science fiction writer who never lived up to his potential. However, after some prodding from Darth Vader of the planet Vulcan, George McFly gained the confidence to stand up to the bullying Biff and win the heart of his future wife, Lorraine. When Marty goes back to the future, his father has transformed into a successful and confident author. As a tribute to Darth Vader’s visit, one of George’s novels is titled, A Match Made In Space, and its cover illustration features the alien as he appeared to George on that fateful night in 1955.