6 of the Most Memorable Moments From SNL40

Saturday Night Live has a history that dates all the way back to October of 1975, as the premier sketch comedy show. It’s launched the careers for what seems like half of Hollywood’s comedians, and made showrunner Lorne Michaels into something of a legend. It’s a show defined by its myriad guest hosts and musical performers, as much as its roller coaster of quality throughout the years, ranging from brilliant to patently awful. Over the last couple of years, it’s entered into something of a renaissance, culminating in its huge 40th anniversary episode that aired over the weekend.

Guest stars and former cast members reunited for SNL40 to celebrate four decades on the air. Celebrities like Will Ferrell, Justin Timberlake, Christopher Walken, and more reprised famed characters and roles, making for a night we imagine the comedy world won’t soon forget. These though, are the ones to watch on repeat.

1. Will Ferrell returned for one final Celebrity Jeopardy

Celebrity Jeopardy may very well be one of SNL’s most popular sketch series, starring Will Ferrell as Alex Trebek, and Darrell Hammond as the mercurial Sean Connery. The latest edition brought together all the old contestants, including Hammond’s Connery and Norm McDonald’s Burt Reynolds. Alec Baldwin also made an appearance as Tony Bennett, with other celebrities stopping in to get in on the action. And for anyone unfamiliar, we highly recommend going back and watching all the old sketches; these are classics.

2. Justin Timberlake and Jimmy Fallon rapped through every SNL catchphrase

Justin Timberlake and Jimmy Fallon have had a long history on SNL together, from their spell as The Bee Gees on “The Barry Gibb Talk Show,” to their numerous musical duets. They opened SNL40 though with their most epic number to date, rapping through almost every catchphrase and saying in the entire history of Saturday Night Live. For the entire five-plus minute run time, we’re treated to a musical 40-year history worthy of two luminaries of the show.

The late Chris Farley was a mainstay of the SNL cast, entertaining us all with his loud and animated style of comedy. Melissa McCarthy was apparently a fan, making an appearance as Farley’s iconic character, motivational speaker Matt Foley. From the delirious arm-swinging to the unnecessary yelling, McCarthy perfectly captured the essence of Farley, while Amy Poehler sat in the background barely keeping it together. Which of course brings us to our next great moment from SNL40…

Amy Poehler and Tina Fey were two of Weekend Update’s greatest hosts, rivaled only by their predecessor, Jane Curtin. The three came together last night to reprise their roles sitting at the news desk, with McCarthy stopping in to be Chris Farley, Ed Norton and Bill Hader acting as twin Stefons, and Emma Stone performing as her favorite SNL character. It was a touching tribute to the iconic sketch that has been a part of every SNL episode for decades, making us wish for the days Fey and Poehler were still on the show.

5. Mike Myers and Dana Carvey brought us to Wayne’s World one more time

Wayne’s World and Wayne’s World 2 were arguably two of the best movies based on SNL characters (out of the 11 total that were made). Mike Myers and Dana Carvey returned for one last bow, listing through the top 10 things that make SNL special. Kanye West made a brief appearance as well, with Myers and Carvey sitting him down while espousing on the values of Beck as the greatest artist alive. What it really succeeded in doing though was making us wish for a Wayne’s World 3. 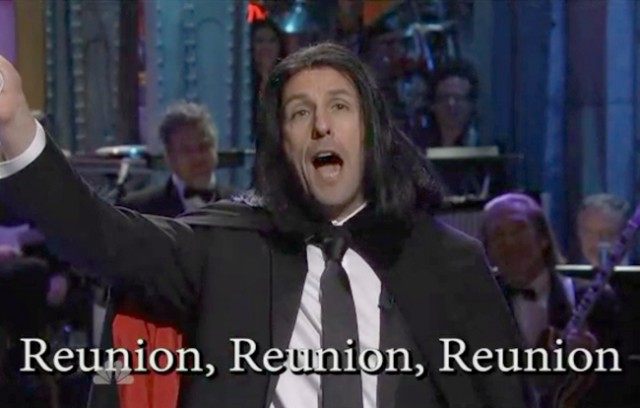 It’s easy to forget that Adam Sandler got his start as a sketch comedian on SNL, before the days of Jack and Jill and Grown-Ups. But there was indeed a time when Sandler’s characters entertained us on a regular basis. His greatest SNL accomplishment was as the long-haired cape-wearing singer, Opera Man. SNL40 had the return of Opera Man, singing us a ballad about how David Spade is doing, Betty White, and the fact that one got paid for his guest appearances. It was a reminder of simpler times for the comedian, making us long for his days as Happy Gilmore and Billy Madison.