6 Most Realistic Movie Special Effects Made Without Computers

Special effects have been an integral part of Hollywood since the era of silent films. They’ve dazzled, developed, evolved, and eventually found themselves wildly overused, to the extent to which CGI has become entirely commonplace in just about every movie. But every once in a while, a director will choose to do something that defies the norm with practical effects. Typically, they’re more difficult to execute, take tons of time and energy to get right, and yield the greatest reward in terms of realism if they’re done correctly.

The truly masterful practical effects though are the ones that are done so well, that an audience has no idea that that they weren’t computer generated. Most of the time, it comes from a place of need: Things like a small budget and less time for post-production magic usually play in to this. Throughout the history of cinema though, there are but a handful of these very effects that absolutely blow our collective minds every time we see them.

1. TARS from Interstellar was an actual, functioning machine

Many of us remember the affable monolithic robot from Interstellar, TARS. He spent a good deal of the movie rolling around in all manner of ways, voiced by Bill Irwin. But what some people don’t know is that the robot was in fact a completely functioning mechanism controlled by Irwin on-set. According to Business Insider, “several puppets weighing 200 pounds were constructed and filmed alongside cast members.” In total, there were four separate puppets to control, each serving a different function in terms of the way it could move and interact with the cast. After-effects were used in post production to clean up the wires and Irwin, but for the most part, the entire apparatus was completely and utterly real.

2. The hallway fight scene from Inception was filmed inside a massive rotating set piece

Perhaps the most iconic scene from Christpher Nolan’s thriller Inception is the gravity-shifted fight scene starring Joseph Gordon-Levitt. In it, we see the orientation of a hallway rapidly change from the ceiling, to the walls, to the floor in the blink of an eye. It all made for a stunning action sequence, actually taking place in an real suspended hallway. It was constructed in a World War I-era warehouse, run by upwards of 500 crew members. The hallway rotated a full 360 degrees, and required Gordon-Levitt to undergo two weeks of training to learn how to operate inside of it.

3. The gravity jog from 2001: A Space Odyssey took place inside a giant hamster wheel

Sci-fi seems to be where practical effects shine the most, and Stanley Kubrick’s 2001: A Space Odyssey is certainly no exception. In one scene, we see an astronaut jogging sideways around a centrifuge in space. This stunning effect was achieved with a complicated yet elegant solution: Kubrick built what amounted to a gigantic hamster wheel rotated around a single camera. According to Gary Lockwood, “a fifteen to twenty second shot of Kier (Dullea) walking toward me took a week to shoot,” producing an effect that took tons of work to accomplish an incredible result sans CGI.

4. The cast of Alien had no idea an alien was about to burst out of John Hurt’s chest the day they shot the scene

Ridley Scott long since established himself as a master of sci-fi with Alien. But in constructing one of the greatest scenes in cinema history, he did something that no CGI effect ever could have accomplished: Genuinely scaring the life out of his actors. Leading into the chest-burster scene, only John Hurt knew what was about to come out of his ribcage (the script only denoted “something emerges”). All the cast saw was an army of crew members all wearing rain-slicks in anticipation of the mess that was about to occur.

When the alien burst out of a prosthetic of Hurt’s chest, the terror you see on the actors’ faces is genuine. Veronica Cartwright even caught a face-full of fake blood, and actually fell flat on her back from the shock. Another actor (Yaphet Kotto) went straight to his trailer and refused to speak to anyone following the scene. Try getting that kind of reaction up against a green screen.

5. The T-Rex that crushed the jeep in Jurassic Park was a full-scale animatronic machine

We all remember the fear we felt when we first saw those ripples in the water glass in Jurassic Park. Out of the rain burst a terrifying T-Rex, as it came down on top of a jeep and crushed it into a pancake. The dinosaur we saw on camera though was in fact a real 9000-pound animatronic miracle functioning on hydraulics, developed painstakingly by a team of engineers. They had played around with both the puppet and electric motor options, neither of which produced the intended effect of moving quickly and efficiently. Employing hydraulics instead allowed it to walk, smash, bite, and be generally horrifying to any average passersby.

6. The logistics behind Linda Hamilton removing a piece of Arnold’s head in T2 were absolutely crazy 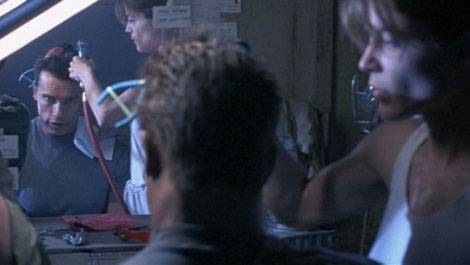 Most of what we remember from T2: Judgment Day is the absolutely breathtaking effects surrounding the liquid metal T-1000. But lost in the shuffle is a scene that required far more than simple computer effects. In it, Arnold’s Terminator needs a microchip removed from his brain. Arnold sits in front of a mirror, and Linda Hamilton peels back a piece of his head to dig it out, making for a wonderfully gruesome scene. But with much of the effects budget poured into the T-1000, they had to get creative.

The logistics: The back of Arnold’s head we see in the foreground is in fact a scale model. The mirror is a window, with real-Arnold sitting behind it acting as his own reflection. Linda Hamilton remains in the foreground with the model, and her twin sister Leslie doubles as her “reflection” behind the window with real-Arnold. It must have taken some serious maneuvering to figure out how to make that work, but we’re sure having a twin makes any mirror scene a whole lot simpler.