You know the look of utter terror you sometimes see on an actor’s face? Or, the bizarre or terrifying movie scenes that make you wonder how anyone thought of something so strange? Sometimes, those movie scenes and realistic expressions aren’t the result of outstanding acting. Instead, they’re very real emotions, or in some cases rituals, that you’re seeing.

Oftentimes, these realistic scenes help a movie achieve extreme popularity; these films all received great Metascores, which are put together by curating critics’ reviews, in addition to high scores on Rotten Tomatoes’ Tomatometer, which measures the percentage of critics who recommend the movie. Here are seven exceptional movies worth checking out for their improvised scenes. 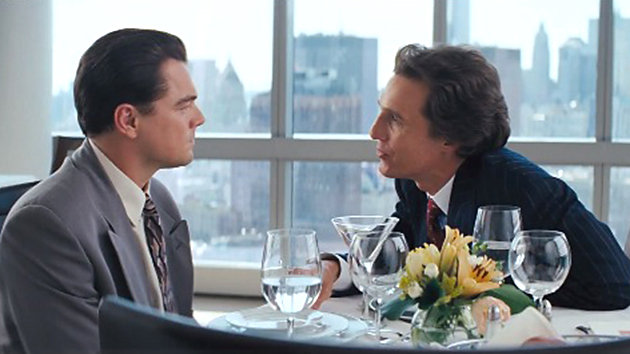 Remember the scene when McConaughey, who plays Leonardo DiCaprio’s boss in The Wolf of Wall Street (2013), takes DiCaprio to lunch and begins teaching him how to succeed on Wall Street? In that same conversation, McConaughey begins beating his chest and humming, encouraging DiCaprio to join in. Turns out, McConaughey wasn’t acting.

“That’s something I’ll do before scenes to relax myself, get my voice to drop. I’ve been doing it for a while, but it’s just something I do,” Arts.Mic reports McConaughey saying. During filming, DiCaprio spotted McConaughey beating his chest on set, asked what he was doing, and was so fascinated by it all that he asked Martin Scorsese if they could put it in the movie. Scorsese agreed. Many who watched The Wolf of Wall Street, which received a Metascore of 75, remember the strange chest-beating scene, meaning it did exactly what DiCaprio and Scorsese had hoped. It made a lasting impression. 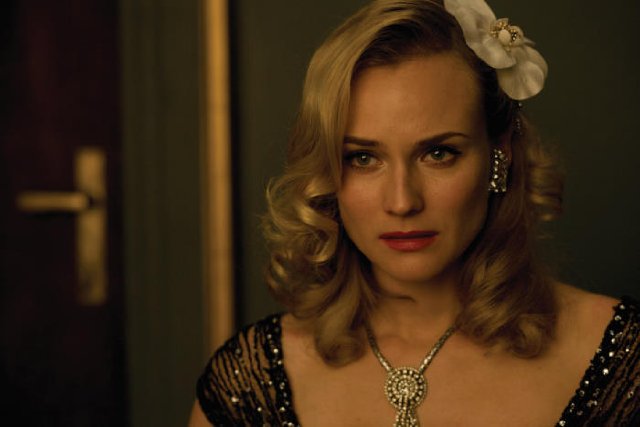 Inglourious Basterds (2009) received favorable reviews overall, with a Metascore of 69. Kruger played Bridget von Hammersmark, a spy/film star, in the film. There is a scene where she is sent to a movie premiere in an attempt to kill Hitler and other Nazi officials. However, Nazi Colonel Hans Landa discovers she is a spy and lures her into a private room, where she is choked to death. That scene was so believable because Kruger was actually choking.

Cracked writes that Quentin Tarantino convinced Kruger to let him strangle her, so the scene was accurately depicted. Tarantino was worried actor Christoph Waltz would choke her too much or too little, which is why he decided to do it himself.

In an interview with Parade, Kruger says, “I get strangled, which was especially weird because you feel it when someone is choking you, so it was an interesting day at the office. The funny part is that Quentin’s hands are in the close-up. I won’t give away the name of the actor who kills me, but Quentin said, ‘He’s not going to do it right, it’ll either be too much or too little. I know exactly what I need and I think I should just do it.’ I have to say it was very strange being strangled by the director.” 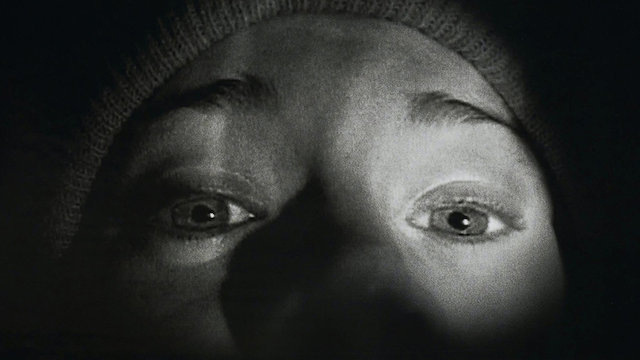 Notice how there’s no actor listed by the title? That’s because the entire movie was unscripted. The Blair Witch Project (1999) received a Metascore of 81, and was created to look like a documentary that tracks three film students who go into the woods to try to uncover the truth behind a local legend.

Creative Planet Network writes that rather than having the actors follow a detailed script, they were only given conceptual outlines and brief scene updates, with the request that they stay in character throughout the camping trip. The crew would then throw unscripted stimuli at the actors when they least expected it, in order to get the most genuine reactions.

“They improvised dialogue and handled things we threw at them without knowing what those things would be in advance. This method allowed them to completely immerse themselves in their characters without interruption,” Creative Planet Network reports that Daniel Myrick, who co-wrote, directed, and edited the movie, said.

4. The Silence of the Lambs, Scott Glenn 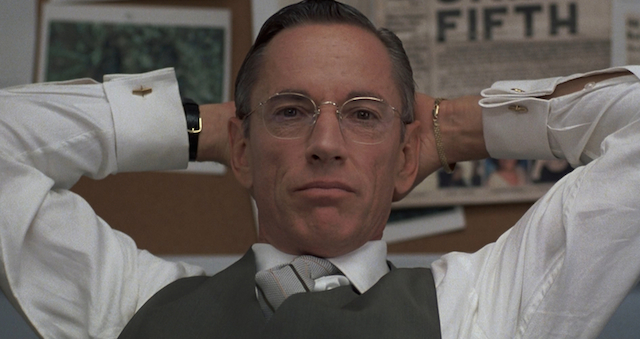 The Silence of the Lambs (1991), is a film about a young FBI agent, Clarice Starling, who is assigned to track down a serial killer who skins his victim. In order to find the killer, Starling and FBI agent Jack Crawford speak with Hannibal Lecter, another psychopath who used to be a psychiatrist. The movie received a Metascore of 84.

When filming The Silence of the Lambs, FBI agent John Douglas, the man who Crawford’s character was based on, had Scott Glenn (who played Crawford) listen to audiotapes of real women being raped, tortured, and murdered by serial killers Lawrence Bittaker and Roy Norris, TV Tropes writes. The tapes, which were meant to give Glenn an idea of how horrifying serial killers truly are, did the job. Glenn teared up almost immediately, and his genuine sadness and anger were used to help fuel his character throughout the movie. According to Pajiba, prior to hearing the tapes, Glenn didn’t believe in the death penalty. He changed his position entirely after listening to those gruesome recordings. 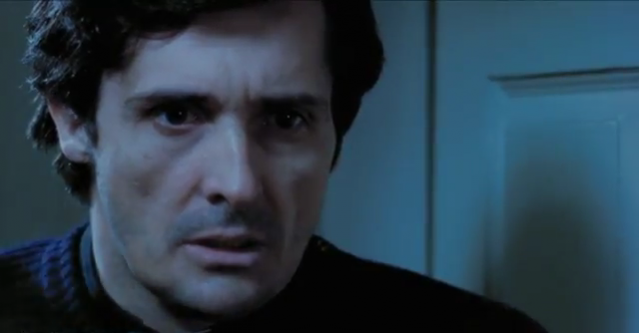 The Exorcist, which received an 88 percent on the Tomatometer, is a well-liked movie that is guaranteed to make your skin crawl. Everyone who has watched The Exorcist (1973), remembers the horrifying scene that involves Regan (Linda Blair) throwing up all over Father Karras, played by Jason Miller. Karras is questioning Regan, who brings up his dead wife. When Karras asks for his wife’s maiden name, Regan vomits all over him.

Remember the shocked and horrified look you see on Miller’s face? That wasn’t acting; he was extremely surprised. According to Cracked, Miller knew there was going to be vomit, which prompted director William Friedkin to get a little creative in order to get a genuine reaction out of Miller. So, he told Miller the spray would hit him in the chest. However, at the very last minute, the pump recalibrated, resulting in the vomit hitting him directly in the face. Miller was reportedly furious the rest of the day. But really, who can blame him? 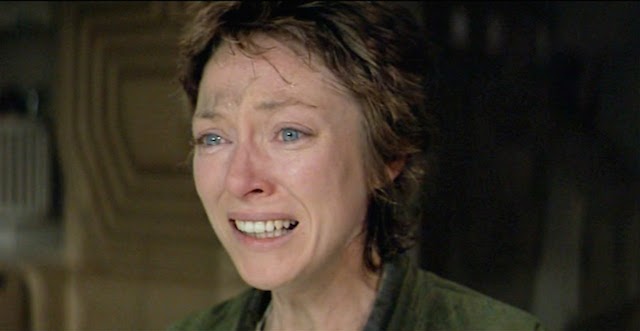 Alien, released in 1979, received a 97 percent on the Tomatometer, partially due to its stunning visuals. Picture the scene that involves the chestburster erupting from John Hurt’s chest at dinner. The horror and shock on everyone’s faces? Those are very real emotions. In an article in The Guardian, cast members reminisce about the traumatic scene. Yaphet Kotto, who played Parker said, “We were all wondering what the hell was going on. Why is the crew looking at us the way they’re looking at us right now? Why are they wearing plastic shields?”

Veronica Cartwright, who played Lambert, added, “You see this thing start to come out, so we all get sucked in, we lean forward to check it out. They shout, ‘Cut!’ They cut John’s T-shirt a little more because it wasn’t going to burst through. Then they said, ‘Let’s start again.’ We all start leaning forward again and all of a sudden it comes out. I tell you, none of us expected it. It came out and twisted round.”

When the blood hit Cartwright, she was so surprised she actually passed out, the cast revealed to The Guardian. It was a smart move by the crew; genuine surprise always makes for a better scene.

TV Tropes writes that Winona Ryder almost drowned when she was a kid, causing her to get a tad anxious around water. In the first scene that was shot for Alien: Resurrection (1997), which received a Metascore of 63, Ryder was required to get in the water. Remember those looks of anxiety before she gets in the water, and the look of absolute terror that’s on her face when she can’t get out? Those were all very real emotions; Ryder was freaking out.

“Hands down the worst experience of my entire life,” Ryder said to Entertainment Weekly in 1997. “Like, literally. I thought I was gonna die. I had a really bad anxiety attack, actually. We were all pretty miserable.”