7 of the Best Films About Mental Illness

May is mental health awareness month, as declared by President Barack Obama back in 2013. In recognition of the month, here’s a look at some of the most memorable instances of mental illness in film. While movies can often give an inaccurate portrayal of mental health issues and lead to common misconceptions that people believe to be true about those who live with mental illness, on the flip side a Hollywood film can also bring mental health issues to light in a realistic and sensitive way, bringing more awareness and money to a particular illness than a million fundraising events ever could. 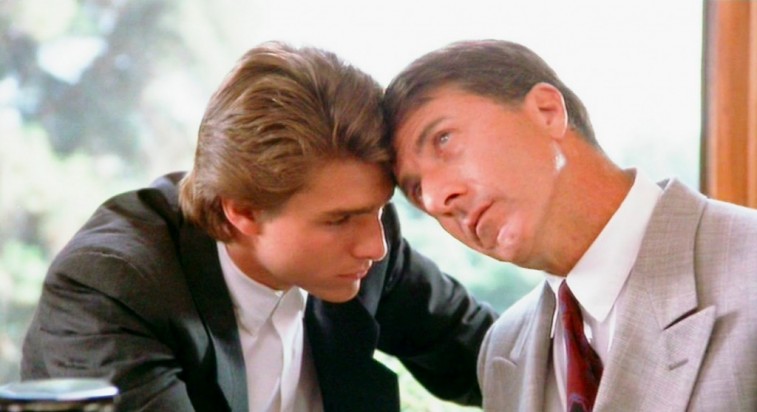 Rain Man is one of the most famous movies about autism and is almost solely responsible for the common misconception that people on the autism spectrum are also savants, which of course isn’t always true. “That 1988 movie, in its first 101 days, accomplished more toward bringing Savant Syndrome to public awareness than all the efforts combined of all those interested in this condition the past 101 years following Dr. Down’s 1887 description of this disorder,” wrote Dr. Darold Treffert, an autism expert who was consulted for the film, in the paper “Rain Man, the Movie/Rain Man, Real Life.”

Dustin Hoffman won an Oscar for his iconic performance as Raymond Babbitt, the autistic brother of Tom Cruise’s character Charlie who inherits all of their father’s estate. When Charlie finds out a brother he didn’t even know existed has gotten all of his father’s money, he heads on a road trip to the mental institution where Raymond lives. Over the course of their adventure, Charlie has to deal with Raymond’s autistic rituals and difficulty with emotions, but also discovers his amazing mathematical and memory skills. That leads to the famous scene in Las Vegas in which Raymond helps Charlie win the money he needs to pay off his debts by counting cards at the blackjack table. In order to prepare for the part, Hoffman did months and months of research on autistic savants and got to know a couple people with autistic savant syndrome. 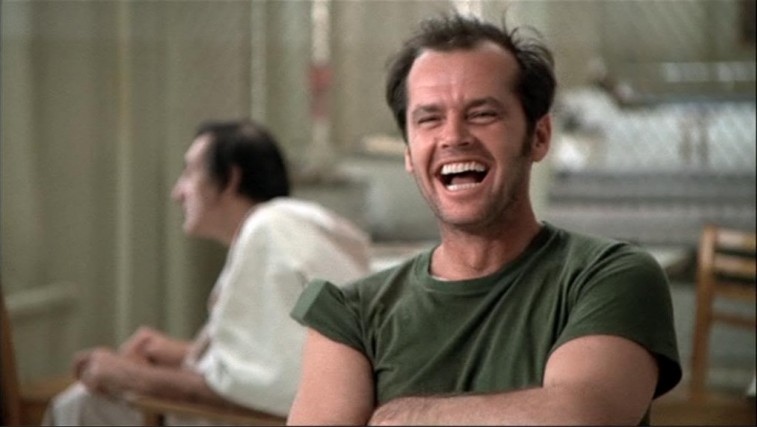 2. One Flew Over the Cuckoo’s Nest

This 1975 drama doesn’t exactly portray mental health professionals or hospitals in the most flattering light, but it’s also probably the most famous movie set in a mental hospital. Based on the counterculture classic novel by Ken Kesey, One Flew Over the Cuckoo’s Nest was the second film ever to win all five major Academy Awards since It Happened One Night in 1934. Jack Nicholson’s performance as the anti-authoritarian Randle “Mac” McMurphy is considered one of the greatest performances in movie history.

The film and McMurphy’s character in particular call into question how society defines sanity and insanity. McMurphy decides to do a stint in the mental hospital by pretending to be crazy rather than finish out his short prison term doing hard labor on a penal farm. His presence there changes the lives of all the patients as he encourages them to seek agency in their lives and question authority, particularly that of the head Nurse Ratched. McMurphy quickly realizes that her techniques are more focused on keeping the patients humiliated and subdued than on helping them become functional in society. While McMurphy encourages the patients to become more independent and think for themselves, Nurse Ratched eventually is able to use the bureaucracy of the hospital to get him with her evil methods. This movie is not an accurate portrayal of how mental hospitals are now, but in the past electroshock therapy and lobotomization were considered effective treatments for difficult and violent patients. This 1999 drama is sort of like the female One Flew Over the Cuckoo’s Nest. It stars Winona Ryder as Susanna Kaysen, a woman who checks into a mental institution for 18 months in 1967 following a suicide attempt. Kaysen is a real woman and the movie is based on her memoir of the same name. While in the hospital she is diagnosed with borderline personality disorder, but like in Cuckoo’s Nest there is question as to whether she is actually mentally ill or is merely suffering a breakdown caused by dissatisfaction with her life. Also like in Cuckoo’s Nest, the movie doesn’t show the hospital in a very flattering light as the patients are abused by and able to easily manipulate the hospital staff.

The film received mixed reviews, but the performance of Angelina Jolie as a woman diagnosed as a sociopath was unanimously praised. Jolie earned an Oscar, Golden Globe, and a Screen Actors Guild Award for her role. Jolie’s character is charismatic, manipulative, rebellious, and abusive. At times she encourages the other patients to stand up for themselves, causing them to look up to her, while at others she demeans them to keep them under her control. She repeatedly escapes from the asylum only to be arrested and brought back.

“I really, genuinely thought I was the only character who was sane in the entire film,” Jolie told BuzzFeed of looking back at the part. “And if you watch it closely, that’s exactly how I was playing it: I am just the only sane person here. I was actually almost upset when people said I was so good at playing insane because I never thought she was insane. She was just incredibly honest, which, I guess, made her seem crazy.” David O. Russell’s movie brought together the much-loved duo of Bradley Cooper and Jennifer Lawrence, who play a pair both dealing with mental health issues that manage to find relief from their symptoms in love. While the movie was widely praised for the performances from the starring actors, including Robert De Niro as Cooper’s character’s father, it was criticized from the mental illness standpoint for taking what The New Yorker refers to as “a personal, faith-and-family-centered approach to holding mental illness in abeyance.”

At the beginning of the film, Cooper’s character is just coming out of a mental hospital after a violent episode. He discovered his wife in the shower with another man and beat the guy nearly to death. He hates his medications, and wants to reconcile with her despite a restraining order she’s slapped on him. That’s when he meets Lawrence’s character, a dark woman recently widowed with some major issues of her own who says she’ll help him get his wife back if he enters a dance competition with her. Lawrence’s performance in particular was praised and she won an Oscar for it among many other awards, but the movie was criticized by doctors and those suffering from mental illness who know that it takes a bit more than love and family to control symptoms. An example of a “good” movie that gets it wrong about mental health. 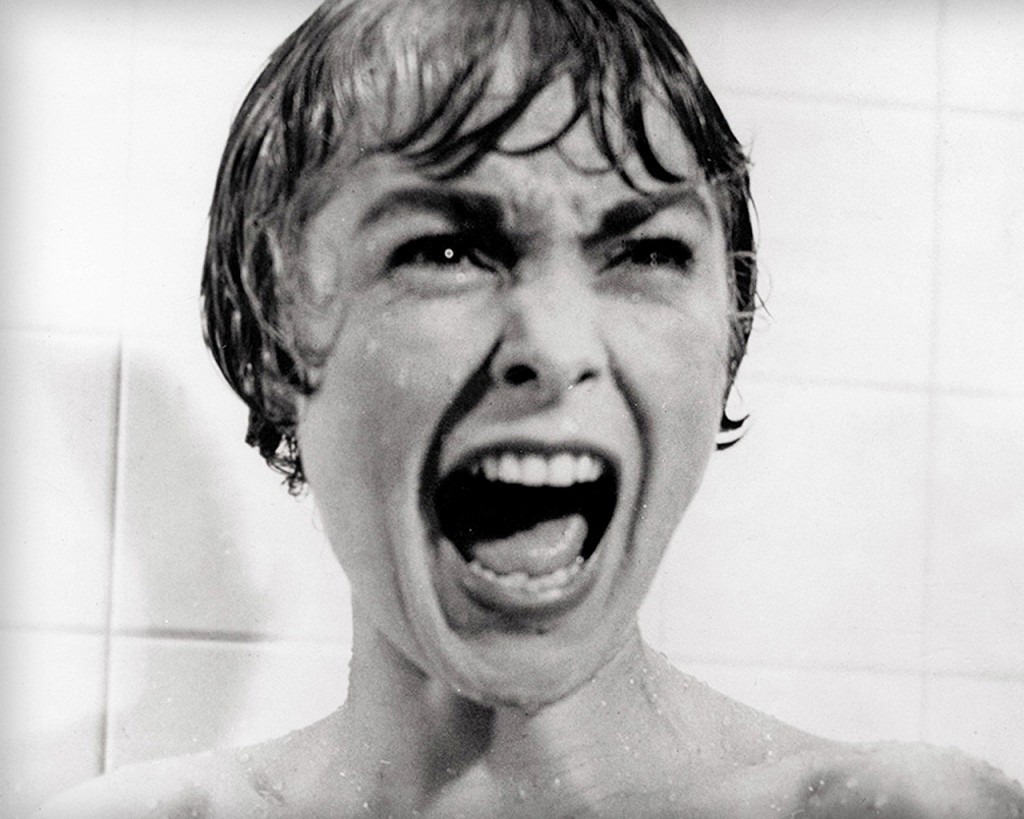 This list wouldn’t be complete without Alfred Hitchcock’s Psycho, a movie about a woman who is murdered by one of the most famous psychopaths in cinematic history, Norman Bates. What Bates probably suffered from was dissociative identity disorder, as [spoiler alert] he adopted his mother’s personality after murdering her and her lover out of jealousy. There are a million reasons why this film is important cinematically and in movie history, and it’s considered to be one of the scariest and overall most important movies ever made, but this article is focused on how the movie portrays mental illness.

It wasn’t so nice in its depiction of mental illness, as Anthony Perkins’s portrayal of Norman Bates is bone-chilling but not very sympathetic, although at the end of the film Hitchcock does have a psychiatrist explain the nature of Norman’s problem. Still, the sight of him wearing a woman’s nightgown and talking to himself in his mother’s voice makes him one of the scarier figures in film, especially since his killings are caused by this sickness rather than coming from a place of evil or hatred. The novel on which the movie is based was inspired by a real murderer in Wisconsin who had similar compulsions regarding his domineering mother. The film is incredibly complicated, throwing suspense at the audience from many different angles, and it leaves the audience just as uneasy after Bates is caught by the police. Law enforcement doesn’t quite know what to do with him, since he is insane, and the audience is left feeling like the world hasn’t seen the last of Norman Bates. Unfortunately mental illness, crime, and the law are still major problems as some people who are mentally ill lack the ability to get the proper treatment.

This 1993 romantic comedy starring Johnny Depp and Mary Stuart Masterson is about a woman coping with schizophrenia, trying to live a normal life while being cared for by her brother. As she takes medication, deals with her daily symptoms, and visits a therapist, the possibility that she might be sent to a group home and the fact that she can’t live on her own is constantly hanging over her head. Masterson was praised for portraying Joon in an honest manner rather than going overly sentimental, as the film itself does at times, or playing the sympathy card. Benny (Aidan Quinn) is Joon’s older brother who cares for her, sometimes in an overbearing fashion to the detriment of both of their personal lives. When she meets and falls in love with a kooky guy named Sam (Depp) who likes to impersonate silent movie stars, Benny has to come to terms with Joon making an adult choice when he’s failed to treat her like one for most of her life. Benny, like everyone else, appreciates Sam’s impressions of Charlie Chaplin and Buster Keaton, but isn’t sure if Joon is really capable of making the choice to become romantically involved with someone.

Some criticized the movie for being too cutesy and dancing around the real problems people suffering from mental illness face, but others appreciated it for showing a woman who is able to live a somewhat independent life with her condition while depicting some of the problems people with schizophrenia deal with on a daily basis. “The story wants to be about love, but is also about madness, and somehow it weaves the two together with a charm that would probably not be quite so easy in real life,” Roger Ebert wrote of the film. 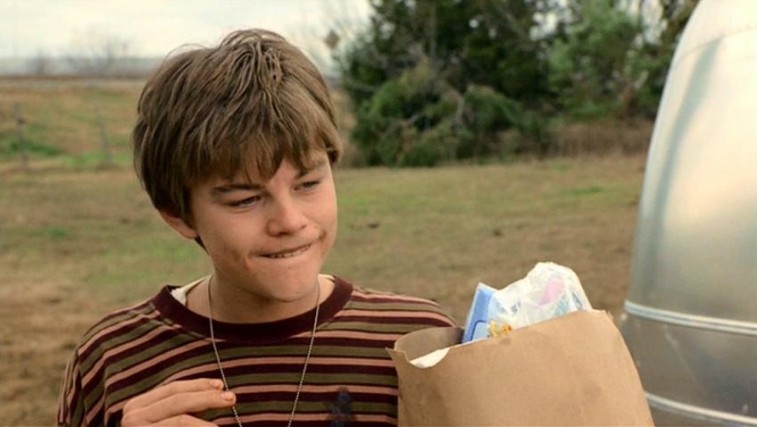 At the age of just 19 Leonardo DiCaprio gave one of his best early performances in this 1993 romantic drama as a teenager with an unnamed developmental disability named Arnie. Johnny Depp plays his older brother, who has taken care of him since their father died and their mother has retreated into her bedroom to sit on the couch, watch TV, and grow increasingly obese. Depp’s character loves his younger brother, but feels stifled by the responsibility required in taking care of him. Arnie can’t be left alone in the bathtub and has a penchant for climbing the town’s water tower and getting stuck at the top, summoning the police.

DiCaprio’s performance received universal acclaim and he was nominated for an Academy Award. To prepare for the role, DiCaprio spent time with a group of boy with various mental disabilities in Austin, closely observing them and learning to mimic their tics, according to an article from Entertainment Weekly. Members of the crew remembered some visitors to the set mistaking DiCaprio for a someone who was actually developmentally disabled when he would stay in character between takes. For DiCaprio, it was a freeing experience that allowed him to wildly experiment. “It was incredibly fulfilling because there were no rules. Zero. There was nothing I wasn’t able to do, no circumstance that I couldn’t create, even if it was in defiance of the narrative,” he told Esquire in 2010. It’s a testament to his acting ability that he was able to pull off such experimentation so well at such a young age.