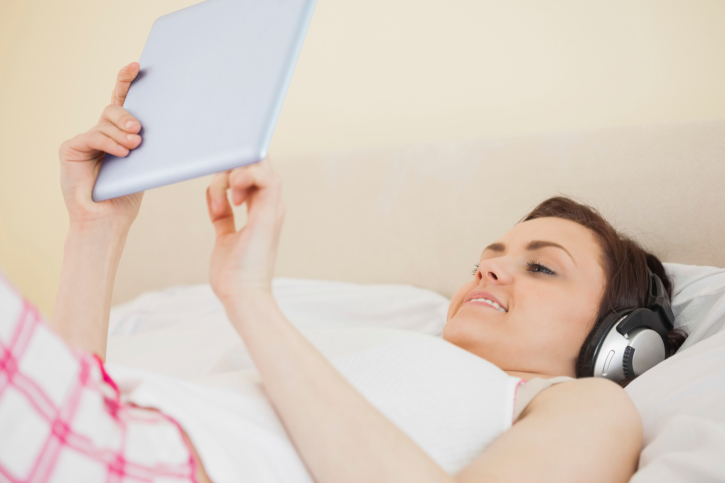 Collectable card games used to be for the back rooms of table-top hobby stores, but have become a booming category for mobile and tablet devices. The genre marries well with a touch screen display and its system of anonymous and friendly battles — even AI practice arenas — will only help introduce more consumers to many a fantastic strategy title that they may have thought were previously inaccessible to them.

Card games, like Yu-gi-oh, Pokemon, and Magic the Gathering, in their paper forms were expensive habits. But free to try with the option to buy virtual offerings have changed the barrier to entry. Those who have always been curious to immerse themselves in these tactical card games now have a chance.

If you’re not sure where to start or you’re a veteran looking for something different, check out some of the games listed below. 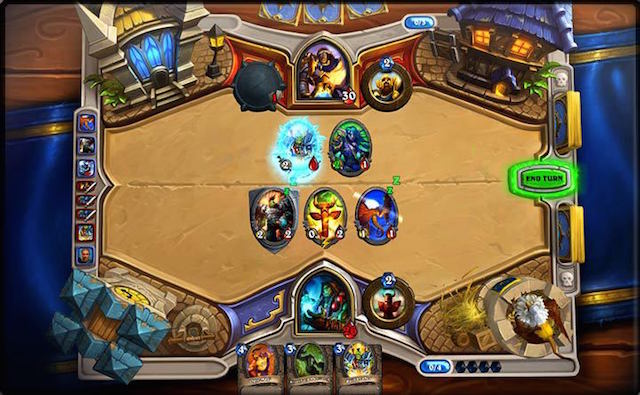 Hearthstone was crafted by a familiar developer that’s well-known for its World of Warcraft MMO. This card game takes some familiar characters from the world’s lore and plunks them into a card battle game. It’s not necessary for players to be familiar with the characters, but fans of the online game will certainly appreciate the references.

Those unfamiliar or new with collectable card games may want to begin their journey with Hearthstone. It’s a nicely polished game that makes a wonderful first impression. Plays will be able to tell by the card and spell animations, sound effects, and board layout that the developers slaved over the details.

Card descriptions are simple to understand for new players, but their advantages and strategies play elegantly into the game’s deep tactical gameplay. It’s a game that’s accessible, but has plenty of depth — appealing to both the enthusiast collectable card players that want to tweak and build their deck; and beginners who are looking for a digestible game to introduce them to the genre. 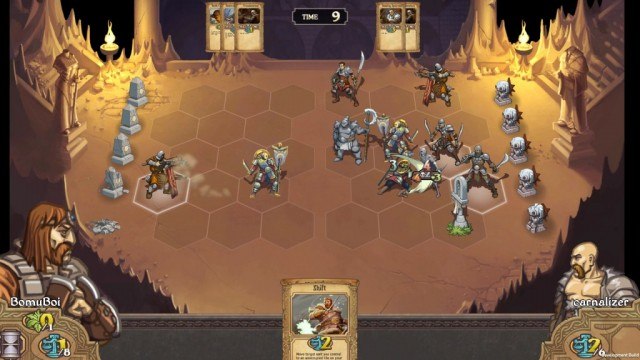 Scrolls comes from a familiar developer as well: Mojang, famed for its game, Minecraft. A collectable card game is quite different from the block-building open world. Scrolls puts a new spin the genre marrying collectable cards with a board game — it’s a wonderful experience that translates into a gritty tactical experience.

Resources — used to summon scrolls (cards) to the battlefield–are based on how much players are willing to sacrifice. Burn a scroll to get another point of mana each turn to gain the ability to summon more costly scrolls. The beginning of every turn brings the burden of choice.

The object of the game is to knock down three of the opponent’s five idols that sit on the opposite end of the hexagonal battlefield while also defending your own. Users will have to decide which rows to defend and what players are willing to sacrifice in the end in order to attain victory. It demands quite a bit of attention especially when more complex scrolls come into play, and players who aren’t able to keep up will quickly loose their tactical footing. This game has one steep learning curve. 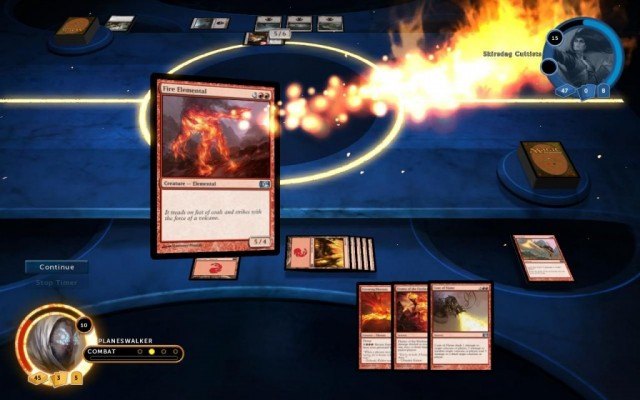 Source: Wizards of the Coast

When people think of collectable card games, Magic the Gathering is certainly one of the first things that comes to mind. It’s made a name for itself among enthusiast card collectors and players in its physical papery form and has continued its legacy on the virtual shelves in the Android marketplace.

The rules are simple, whittle the opponent’s health down from 20 to zero with the help of creatures players will draw from their own decks. That’s the plain and simple version. In reality, there’s a swath of character bonuses to take note of, spells that can be cast to counter an opponent’s action, and counter maneuvers to even cancel-out those spells or creature abilities. It’s a fun and tactical game that’s easy to sink lots of time into crafting new decks.

Players who are new to Magic will be able to grow here. Right off the bat, the game asks how much experience players have had with the game: none, a little, or a lot. The game gives context to the different cards and classes, walking players through with a nicely-crafted tutorial. After completion, players will have the option to dive into multiplayer in up to four-way battles or hone their skills in the 25 opponents users will face in single-player games. 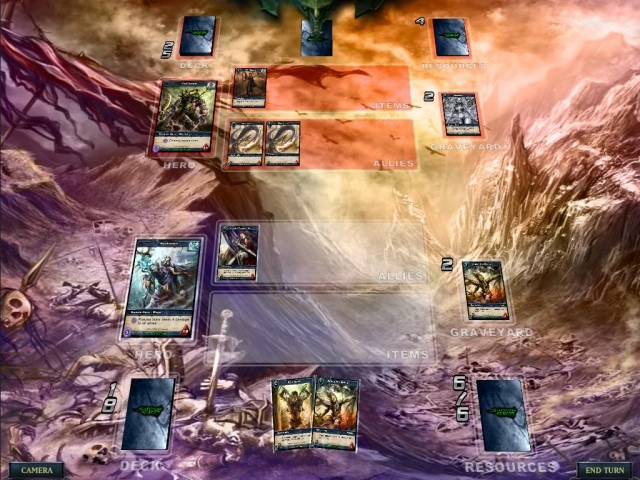 A Kickstarter success story that has become a free-to-play mobile card game. Players of Magic the Gathering will see similarities between the two, but this game isn’t a complete copy. The way resources are gained are much like Scrolls, sacrificing cards at the beginning of the player’s turn to gain enough to pay for spells, items, and allies that will assist users in battle. Each player also gets to have a dedicated hero that comes with his or her own health points and bonuses.

The object of the game is to kill the opponents hero while staving off enemy attacks on your own. It’s a balance of decisions where players will have to choose to sacrifice some of their own health in order to take down the opponent, or take the cautious approach and clear the battlefield before going in for the kill.

The UI isn’t quite as well-polished as Hearthstone and other card games, requiring a lot of swipes and tap to look at cards in-hand as well as the cards the opponent has laid out on the table. 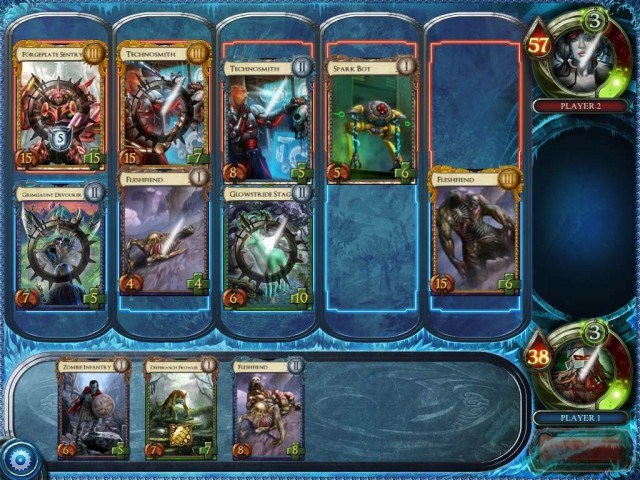 This game’s biggest claim to fame is Richard Garfield, who some may recognize as the creator of Magic the Gathering. Fans of the collectable card genre will be pleased to know he was a co-designer on this project.

The game’s mechanics are made for a virtual environment. Every turn is a new hand of five cards with the option to play a maximum of two spells. This aspect of the game makes players choose wisely, as it’s not certain when users get to see that card in an ever-circulating deck. Also, users may want to play certain cards based on their evolutionary possibilities; yup, cards rank up as the user’s hero levels up and with each rank comes the possibilities of better bonuses, health points, and attack damage.

The object of the game is in the Magic the Gathering tradition, bring the opponent’s health down to zero. But before players do that, they’ll have to battle off any enemy monster that sits directly in an ally’s path. Players will have to choose to defend their own hero or take a spot that’s clear on the grid to attack their opponent.

Once players get out of the AI gameplay to PvP, they may feel a little overwhelmed. There’s a pay to play structure here, so “free” isn’t actually “free.” Skill will quickly fall by the wayside if players aren’t willing to shell out some extra cash for new decks. People who have been playing with the paper cards of old may be more willing to reach into their wallet to purchase a booster pack, but newcomers may be disappointed and not want to stick around. 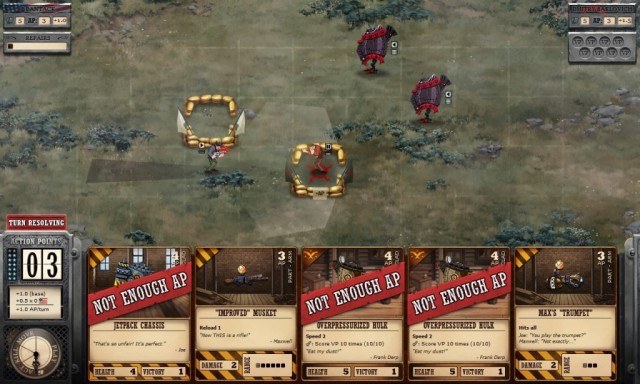 Ironclad Tactics doesn’t play strictly like a card game, per se. It melds deck-building from cards collected during story mode after each battle with defense strategy akin to Plants vs Zombies. Only, instead of potted plants defending a house, it’s animatronic bots fighting on the battlefield in the American Civil War.

Players have buff cards that defend while stalling to get enough AP to build a line of gun-toting robots as well as scouts and riflemen to takeover key vantage points on the grid that earn extra resources. It’s a good bit of fun, and battles don’t drag on for long either. However, while deck building will help determine a player’s success in battle, there’s some aspect of randomness that may be frustrating to some. Each turn players have a set amount of cards in-hand and the chances of a key card appearing when needed is sometimes the luck of the draw and not based wholly on good deck composition.

For those that want tactical card-based strategy game with a steep learning curve, Ironclad Tactics may be a good choice. The first six missions are free to try, after that you’ll have to pay $3.99 for the full game. 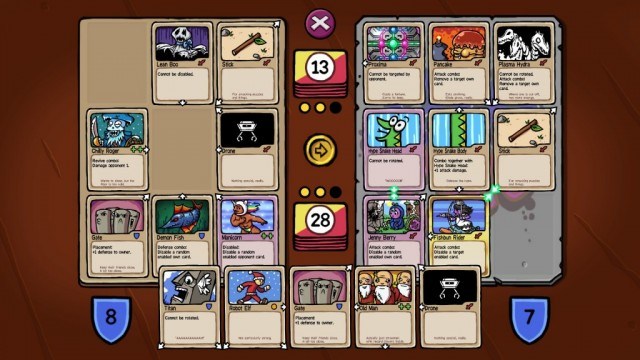 Card City Nights has no multiplayer access, it’s a single-player adventure card game. The premise is the player’s characters has just moved to a new city where everyone is obsessed with this one card game. The object is to collect legendary cards so you can do battle with more experienced opponents (think Pokemon, but with cards).

The cards work on a combo-based system where you can attack, defend, or heal depending on what card types you play. In card battles there are three parts to concentrate on: preparation, strategy, and puzzle-solving.

The object is to string cards together on a 3-by-3 grid players are given to create combos of three or more to whittle your enemy’s health down to zero and give yourself bonuses. (You can also win if your opponent blocks themselves in and has no remaining moves.) However, each card has a set of arrows on it that only allow it to combine with cards that will match with those arrows.

The concept is simple enough for beginners and non-card-playing enthusiasts to grasp, and it’s a fun adventure game. There are, of course, options to tinker with your deck for upcoming battles, but enthusiasts will find the game’s offerings quite restrictive compared to more hard-core collectable card games.