While there is no shortage of gifts for fans of superheroes, many of those gifts tend to be less than practical. For example, this movie-quality Captain America Shield may look awesome hanging on your wall, but you’ll probably never actually have to use it to knock out some Nazis (at least, we hope not). However, just because a product is branded with a superhero’s logo doesn’t mean that it has to be wildly impractical. Here are seven superhero tech products that you can actually use every day. 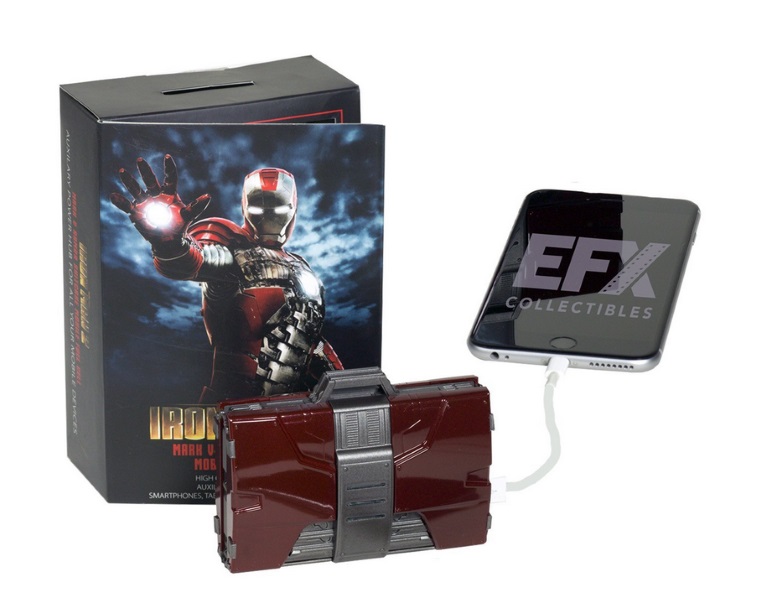 As if a rocket-powered suit of armor isn’t already awesome enough, Tony Stark also invented a compact “suitcase” version of his Iron Man outfit that automatically attaches itself to his body when he opens it. And while this particular version of the Iron Man Mark V Armor Suitcase doesn’t have the power to turn you into Iron Man, it does have the power to recharge your mobile devices. Packed with 12,000 mAh of power and two USB ports, this portable fuel cell will charge most types of mobile devices, including iPhone and Android smartphones, so you’ll never have to worry about running out of juice. Oh, and did we mention that it’s an officially licensed, quarter- scale replica of the suitcase seen in Iron Man 2? Find the Iron Man Mark V Armor Suitcase Mobile Battery Charger here. 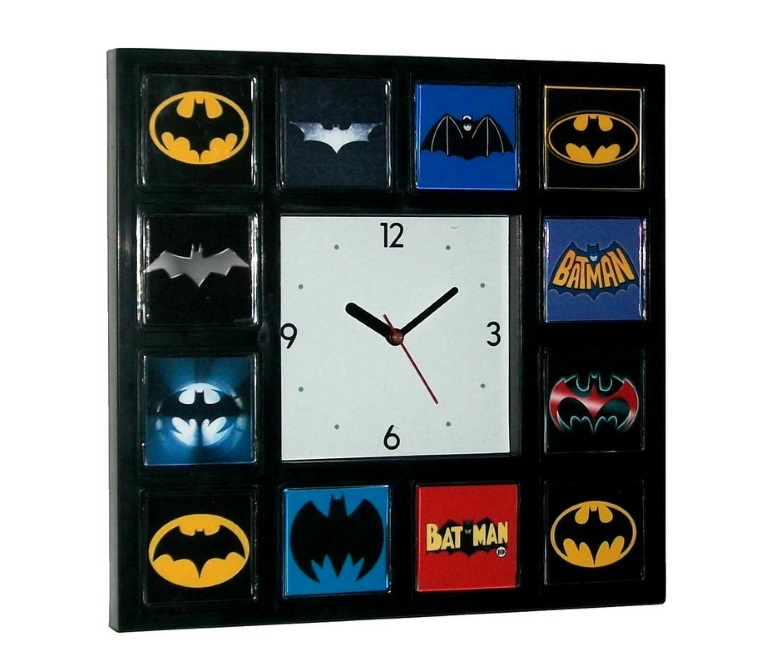 There’s probably no other superhero character who has been reinterpreted and rebooted as many times as Batman. From the campy caped crusader played by Adam West in the 1960s TV show, to the embittered vigilante crime fighter that Ben Affleck portrays in the upcoming Batman v Superman: Dawn of Justice movie, there’s no question that the character of Batman has had many different incarnations over the years. Not surprisingly, the design of Batman’s logo has also changed many times.

This History of Batman clock incorporates many of the different Batman logos that have been seen in comics, TV shows, and movies over the years. Featuring a square clock face surrounded by 12 different Batman logos (one for each hour), this sturdy timekeeping device can be hung on the wall or used as a table or desk clock. This clock may use old-school analog tech, but it’s still a must-have collector’s item for any Batman fan’s man-cave. You can find the History of Batman Bat Signal Movie TV Show Comics Clock here. 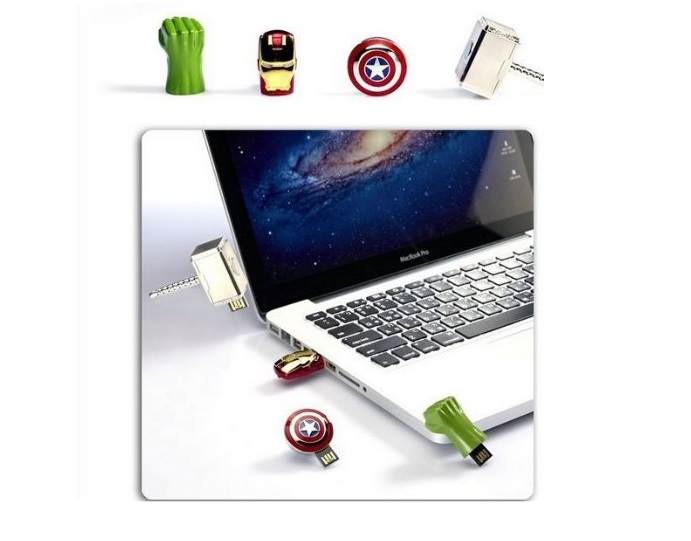 Who will save your precious data from being lost when computer crashes threaten? Well, if you have one of the above flash drives, your data can be saved by an Avenger. Captain America, Iron Man, Thor, and the Incredible Hulk are all represented here with flash drives made in the shape of objects associated with their character. Available in 8GB, 16GB, and 32GB capacities, you can find the Captain America/ Iron Man/Thor/ Hulk USB Flash Drive Flash Memory Sticks here. 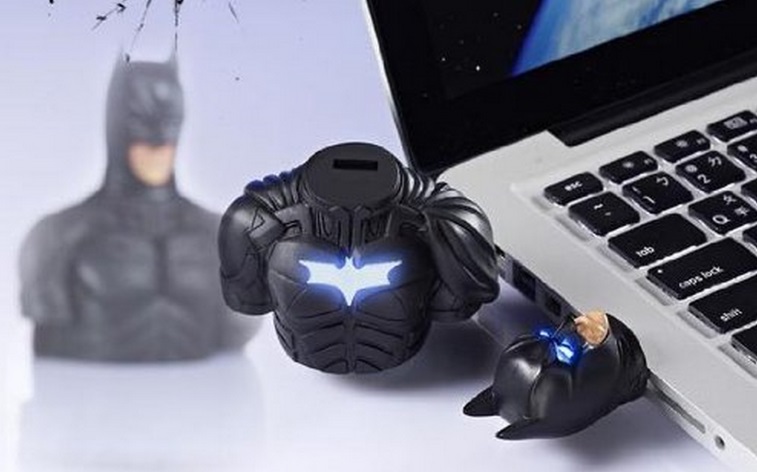 Of course, if you’re not a Marvel fan, you probably don’t want to entrust your data to one of the Avengers. In that case, what about some Dark Knight data storage? Modeled after the titular character of Christopher Nolan’s The Dark Knight Rises, this high-tech bust of Batman features a detachable head with 16GB of built-in storage. When you’re finished filling the Dark Knight’s head with your data, simply reattach it to the body that also functions as a USB hub. And for extra cool points, Batman’s eyes and chest logo also light up.  You can find the Batman 16GB USB Light Up Flash Drive here.

Show off your superhero fandom and protect your cell phone at the same time with these awesome soft rubber silicone phone casings featuring some of the world’s best-known superheroes. Made from high quality silicone, these stretchable covers include cutouts for your device’s camera lens and other functions. While these particular back cases are designed to be used with the iPhone 6 Plus, cases for other phone models are also available. Which superhero will you choose to protect your phone – Batman, Iron Man, Spider-Man, Superman, or Wonder Woman? You can find the Superhero Cartoon Soft Rubber Silicone Back Case Cover Skin for iPhone 6 Plus here. 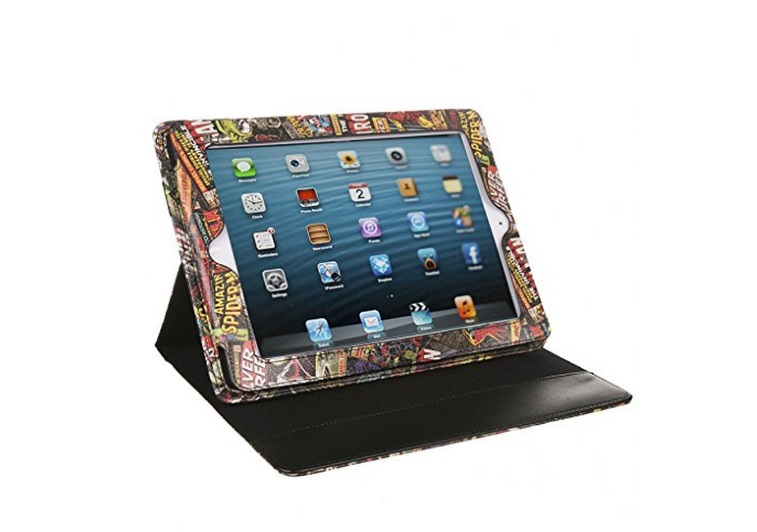 Cell phones aren’t the only mobile devices that can be protected in superhero style. Protect your iPad with this cool Marvel Comics Vintage Covers iPad Cover that features classic comic book cover art from some of Marvel’s best-known titles, such as Captain America, The Amazing Spider-Man, and The Incredible Hulk. Besides protecting your iPad from scratches and minor bumps, this cover also functions as a stand for viewing your tablet in landscape mode. The cover is designed to fit the classic iPad as well as the new iPad Air models. You can find the Marvel Comics Vintage Covers iPad Cover here. 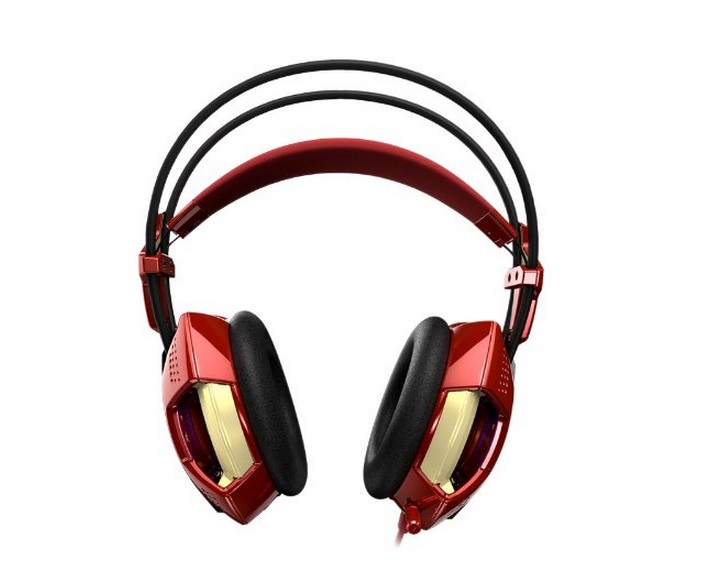 We’re not sure if Tony Stark plays video games. Between battling supervillains and working on his latest inventions (not to mention all the partying), we’re not sure if he even has the time. However, we’re pretty sure he would use these gaming headphones if he did. Just like Iron Man’s armor, this headset features a red and gold color scheme and is packed with cutting-edge technology — including a noise reduction feature, a retractable microphone, and pulsating lights that change color during gameplay.

However, it’s the little details found on this product that impress us the most, such as the “Stark Industries” logo  emblazoned across the headband. Just remember that this headset is intended for gaming, so it uses a USB connector, rather than a standard 3.5mm headphone jack.  You can find the Iron Man 3 Gaming Headset Marvel PC Headphones here.