7 of the Weirdest Movie Pets 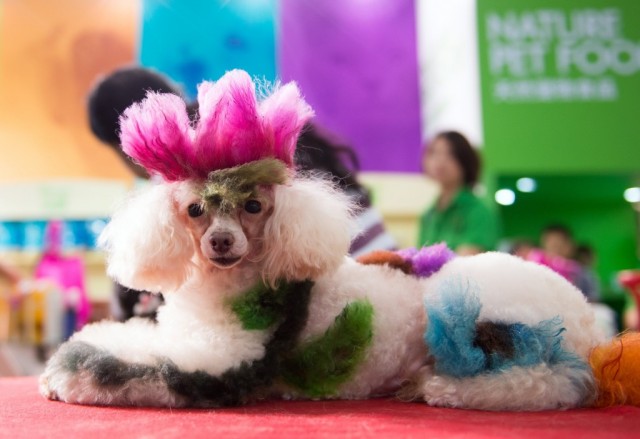 What makes a pet weird? For some people, anything outside of the traditional cat/dog dichotomy may seem weird. However, while cats and dogs still remain highly popular pet choices, these days everything from domesticated rodents or rabbits, to exotic reptiles and birds can be considered conventional pets to own. On the other hand, if you own a miniature horse or a sloth, your choice of pet might be considered slightly weird by most people.

That being said, when it comes to weirdness, no real life pet can compete with some of the bizarre creatures that have been portrayed in movies. While the basketball-playing golden retriever in Air Bud and the murderous St. Bernard in Cujo put a weird twist on the traditional dog-owning pet experience, some of the strangest pets seen in films are animals that couldn’t possibly exist in real life.

Because there are so many strange movie pets to choose from, the pets included in this list were limited to live action creatures (sorry, fans of Lilo & Stitch). Since it’s hard to say which fictional movie pets are weirder than others, the pets included in this list were also selected according to our personal opinion of what constitutes a weird pet. However, feel free to comment about your favorite weird movie pet that we may have overlooked. Keeping those caveats in mind, here are seven pets portrayed in movies that we think are pretty damn weird. Pets are listed according to their first movie appearances, from earliest to latest, rather than their relative weirdness.

Despite being a dog, there is nothing conventional about the pet portrayed in this disturbing dystopian science fiction film. In A Boy and His Dog, a young boy named Vic wanders through a post-apocalyptic wasteland with his dog named Blood. However, Blood is no ordinary dog. Besides being able to telepathically communicate with Vic, Blood has a somewhat cantankerous personality and often berates Vic for his obsession with sex.

Needless to say, despite being a dog, Blood’s telepathic abilities and strangely domineering relationship with his owner earns this creepy creature a spot on our list of weirdest movie pets. At the end of A Boy and His Dog, Blood also delivers one of the film’s most memorable lines with a twisted pun about eating a human.

While this cult science fiction franchise is primarily known as a television series today, the pilot episode of the original Battlestar Galactica television series was also reedited and released as a feature-length film. In the film, various colonies of humans living on planets far from earth are engaged in a long-running war with a robotic race called Cylons. During a Cylon attack on one of the colonies, a young human boy’s dog, or “daggit,” is killed. Yes, for some fracking reason the dogs in Battlestar Galactica are referred to as daggits.

Since all the daggits were killed by the Cylons, a well-meaning scientist creates a replacement “robo-daggit” for the boy that is named Muffit II in honor of the original. While the creation of Muffit II was meant as a kind gesture for a young boy traumatized by the loss of his daggit, the end result is a creepy combination of fur and metal. For added weirdness, as documented by the Galactica.tv site, Muffit II was actually a costumed chimpanzee.

The third installment in the original Star Wars trilogy featured one of the weirdest and perhaps one of the most fearsome pets ever portrayed on film. In the film, Luke Skywalker visits Jabba the Hutt’s palace in an attempt to secure the release of his friend Han Solo. In response, Jabba attempts to feed Luke to a giant carnivorous monster known as the Rancor. Luke manages to kill the creature by triggering a heavy door that crushes the Rancor’s neck. However, when the heartbroken Rancor keeper begins crying, it becomes apparent that the Rancor wasn’t just a ravenous beast, it was also someone’s beloved pet.

Due to its nightmarish appearance and its habit of eating whatever creatures Jabba drops into its underground lair, the Rancor qualifies as one of the weirdest and most disturbing pets seen in a movie. Still, we can’t help feeling a little sorry for the inconsolable Rancor keeper.

While the Mogwai may be the cutest of all the pets on this list, the creatures are undeniably weird, not to mention incredibly dangerous. In the film, a father purchases an adorable furry creature known as a Mogwai as a last-minute Christmas present for his son, Billy. However, the seller warns him that there are three important rules to follow when caring for a Mogwai: avoid exposing it to intense light, do not get it wet, and never feed it after midnight.

Unfortunately, Billy fails to abide by these rules as he cares for the Mogwai he calls “Gizmo.” After accidentally getting Gizmo wet, the creature spawns several more Mogwai. The new Mogwai then proceed to trick Billy into feeding them after midnight, which turns them into evil reptilian creatures called gremlins. Needless to say, any pet that spontaneously multiplies in water or transforms into malicious carnivorous creature qualifies as an extremely weird, if not outright terrifying, pet.

These purring balls of fur were first introduced as pets in the original Star Trek television series. However, Tribbles have also made appearances in several feature films, including Star Trek III: The Search for Spock, Star Trek Generations, Star Trek (2009), and Star Trek Into Darkness. While tribbles only made brief appearances in most Star Trek films, the creatures played a pivotal role in the plot of Star Trek Into Darkness. In that film, Dr. McCoy discovers the healing properties of Khan’s blood by testing it on a dead tribble, which later enables him to save Kirk’s life. In the video clip above, the reanimated tribble can be seen around the 3:45 mark.

So what makes tribbles so weird? In the Star Trek universe, tribbles are notorious for their ability to consume large amounts of food and reproduce at an alarming rate. Their weirdly amorphous shape also makes us wonder how tribble owners even know which end to pet.

Based on Alan Moore’s critically-acclaimed comic book series of the same name, the Watchmen is a film that is filled with strange and complex costumed characters. One of the so-called superheroes is the highly intelligent Ozymandias, also known as Adrian Veidt. When Veidt isn’t orchestrating a complex global conspiracy, he apparently likes to dabble in a little genetic experimentation on the side, as shown by his ownership of a blue-colored lynx named Bubastis.

Unfortunately, as seen in the clip above, Veidt is just as willing to sacrifice his pet to achieve his ultimate goals as he is a large portion of humanity. Due to its strange origins and even stranger death, Bubastis qualifies as one of the weirdest pets ever portrayed onscreen.

The third installment in the long-running Predator franchise continues the story of humans being hunted for sport by large, technologically advanced aliens known simply as “Predators.” However, Predators revealed that the aliens aren’t just intergalactic hunters; they’re also proud pet owners. Unfortunately for the human characters in this film, the Predators’ pets are a nightmarish alien version of a hunting dog. The alien dog creatures can be briefly seen around the 1:20 mark in the video clip above.

Besides their disturbing use as helpers for human hunting, the creatures also have a bizarre demonic appearance that looks like a cross between a dog and a horned lizard. For all of these reasons, the alien dogs in Predators have earned a spot on our list of weirdest movie pets.