Science fiction is a fascinating and exciting genre in both literature and film, but the genre has a unique advantage in the medium of television — the advantage of time. Given the extra time allowed by even a single season of a weekly series, a quality sci-fi show can explore its world, its characters, and its ideas with far more depth and detail than is usually allowed in other mediums. Predictably, the formula of television has hosted many of the greatest achievements in storytelling in the history of the enduring genre, giving us unique series that can stand among the best that have ever aired.

While it’s impossible to cover every quality sci-fi TV show ever produced in one short article, we’ve nonetheless done our best to make the following list of the greatest sci-fi TV series of all-time. In no particular order: 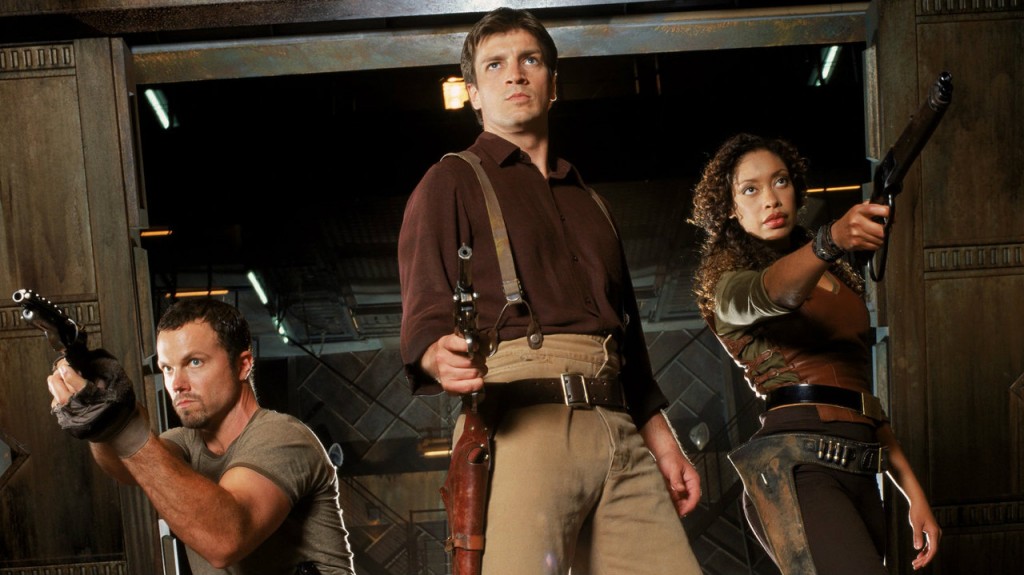 Joss Whedon’s space Western series Firefly was only allowed to air 14 episodes before it was canceled, but those 14 episodes were enough to generate a loyal fan base clamoring for more. Thankfully, the series creators produced a follow-up movie Serenity to tie up the series’ loose ends. In such a limited run, Firefly managed to create a unique frontier world populated with a core cast of lovable outcasts rubbing against one another.

Nowadays, viewers are likely to love the series equally for the complex mythology of a dystopian, interplanetary government and for Whedon’s trademark witty banter, which is at its best coming from the mouth of series star Mal Reynolds (Nathan Fillion). Partially due to its cancellation, Firefly is one of the most perfectly realized and consistent television shows ever produced.

Futurama is what happens when Matt Groening, creator of The Simpsons, does science fiction. Do you even need to know anything more? Since it’s a science fiction series, it was canceled before its time, only to be resurrected with a string of straight-to-DVD films and a run of seasons on Comedy Central that didn’t quite match the heights of the original run. It’s a hard feat when the first five seasons of Futurama consistently managed to blend sitcom tropes with a zany science fiction world where anything is possible from episode to episode. Despite the gleeful insanity of this ever-changing year 3000, Futurama‘s greatest asset was always in its cast, including such lovable favorites as 20th-century idiot Philip J. Fry, narcissistic, kleptomaniac robot Bender, incompetent, pathetic Dr. Zoidberg, and — hell, just about every other member of the main cast. 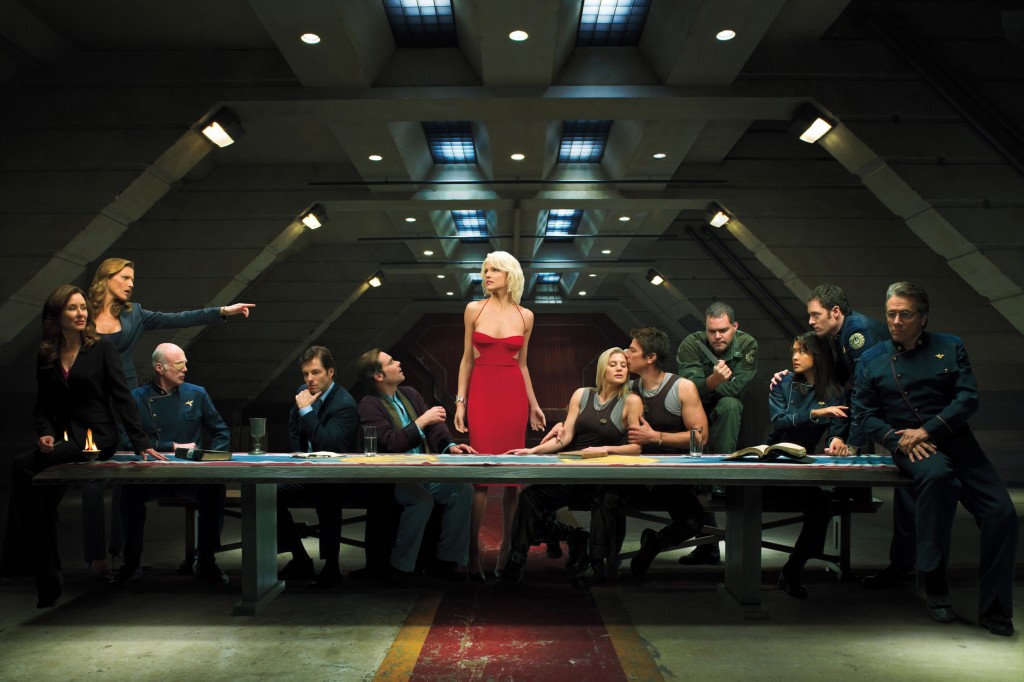 The SyFy television network isn’t just for Sharknado sequels — it can also produce a series as ambitious and involving as Battlestar Galactica, a remake of a short-lived ’70s TV series concerning the war between humanity and the rebellious robots dubbed Cylons. The 21st-century version focuses on a fleet of ships containing the little that’s left of humanity as they try to reach a mythical homeworld called Earth while still struggling to understand their treacherous and mysterious opponents. Rather than focusing simply on space battles, Battlestar Galactica trafficked heavily in multi-faceted characters whose interpersonal conflicts and deep-rooted beliefs rubbed up against each other in political conflicts that may well determine the future of mankind, turning what could have been a series of CGI space battles into a masterpiece of political and moral complexity. 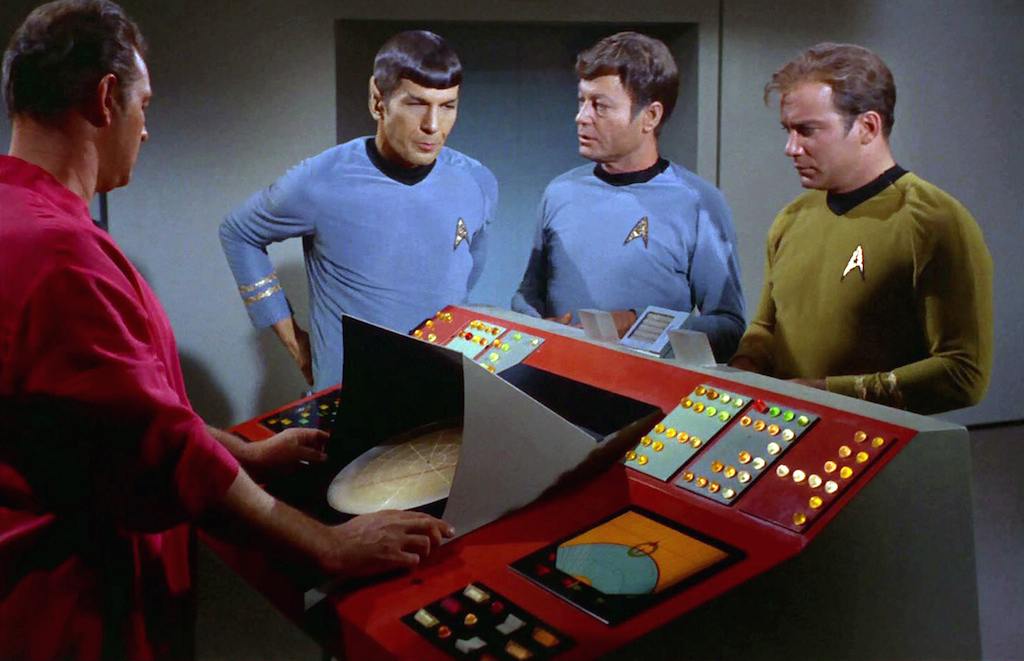 We’re cheating a bit and including every Star Trek series under one umbrella. They’re not all created equal, but they still belong together. Though every reincarnation of the classic series featured a different cast of characters, all of them used the voyages of the USS Enterprise to explore some of the headiest concepts in sci-fi lore, finding character building adventures and deeply unsettling existential issues in every corner of the universe. Though the franchise has since spawned a total of 12 movies with a 13th on the way, reuniting old casts and more recently assembling new ones to play the enduring characters of the original series, nothing can really touch the heights reached by the original series and its direct sequel The Next Generation.

The X-Files could have easily become a monster-of-the-week series, showing FBI agents Mulder and Scully embarking on new extra-terrestrial assignments with each episode that never quite confirm nor deny the former’s deeply-held conviction that aliens are among us. Instead, however, the series became one of the first and best network shows to create overarching story-lines involving mind erasures, abductions, shady government figures, and, of course, alien invaders. Despite faltering late in its run, The X-Files built an interesting and thought-provoking mythology while anchoring most of the series with two memorable, likable lead characters who kept us caring about the program even though those standalone monster-of-the-week episodes. 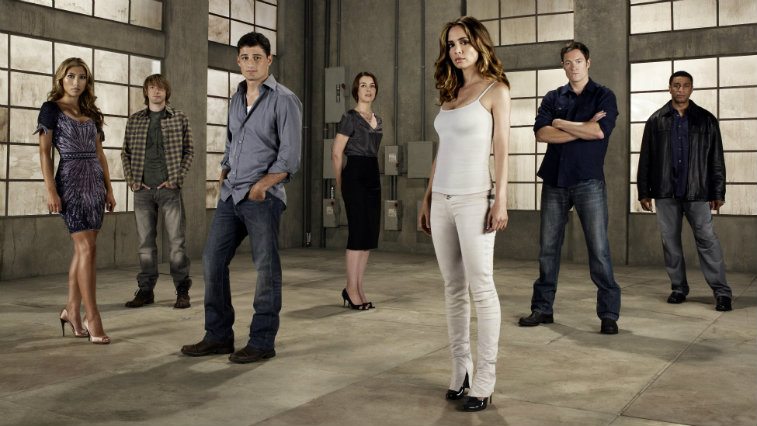 Though it never garnered the loyal fanbase of Whedon’s other short-lived sci-fi Firefly, Dollhouse managed to last two seasons and create an ever-expanding dystopian storyline that felt uncomfortably close to home. Beginning with standalone episodes before growing into a superior series of interconnected storylines, the series concerns an underground institution where humans are treated like re-programmable robots to be rented out to the rich and powerful to do their bidding. Though centered around the expanding consciousness of Eliza Dushku’s “Doll” Echo, the supporting cast, featuring outstanding performances from Fran Kranz and Olivia Williams, became a highlight of the ever-improving show, as they struggled to contain the world-altering implications of the Dollhouse technology. 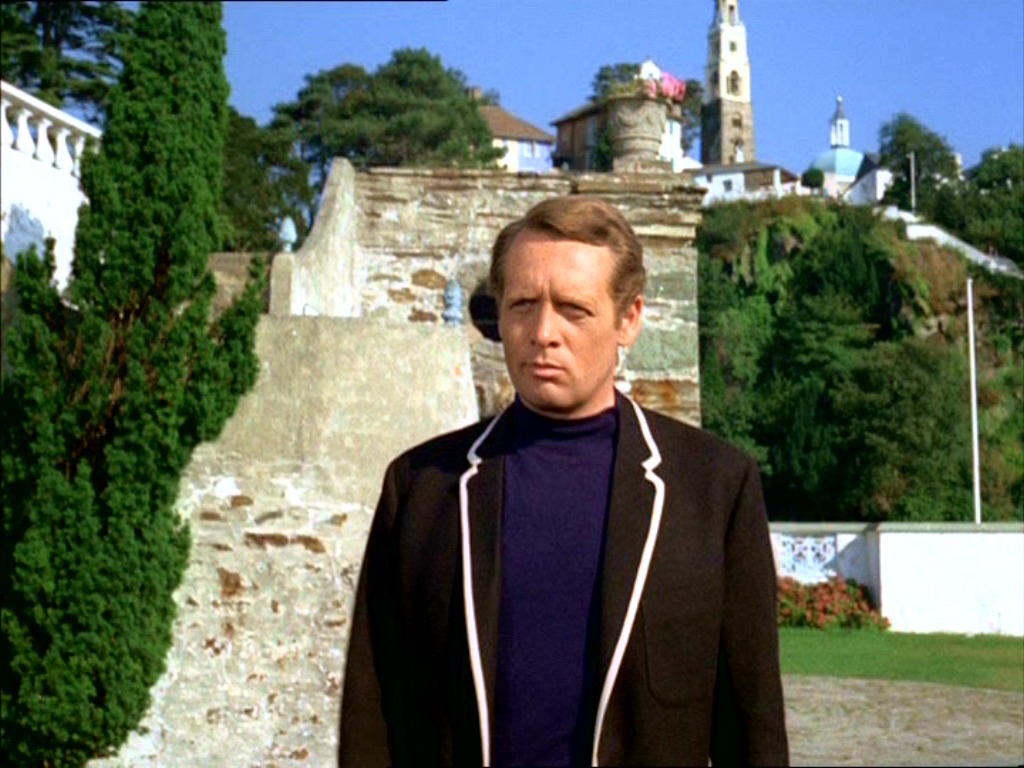 Patrick McGoohan turned down the role as the first James Bond in order to pursue his own passion project — a single-series science fiction show called The Prisoner, concerning a former spy who is captured and held captive in an idyllic island community run by a mysterious group seeking “information.” The ’60s series is filled with some of the most surreal and striking imagery ever aired, all supporting allegorical and metaphorical themes concerning individualism and Cold War politics that are as fascinating as they are difficult to parse, plus some of the coolest retro-futuristic production design you’re likely to see this side of The Jetsons. In an era long before television was taken seriously as an art form, Patrick McGoohan told a thoughtful and visually inspired story whose influence is still felt today. 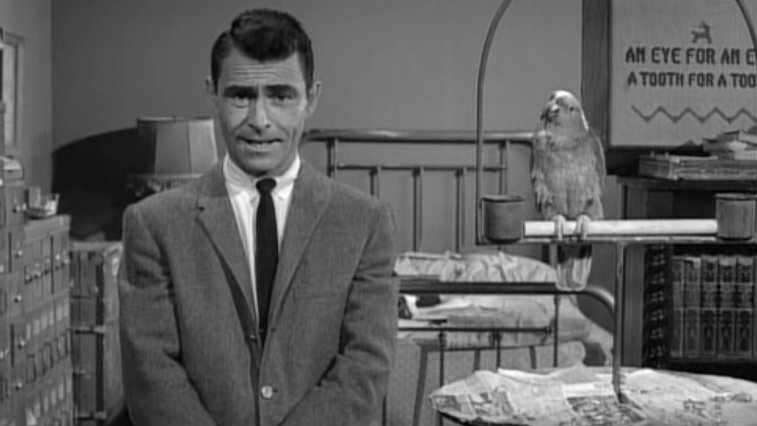 Blending horror, science fiction, and tragedy on a weekly basis, Rod Serling created the finest anthology television series ever produced, penning a bulk of the episodes himself. His singular voice shines through, as the rotating cast of characters struggle with themes both universal and unique to the late-’50s Cold War era, including paranoia, apocalyptic fear, nostalgia, love, and hatred. Many of the best and most influential episodes of the series have been absorbed into our pop-culture subconscious over the years, as the metaphorical, twisty storytelling of the series laid the foundation for countless horror and science fiction productions that have come in the years since. 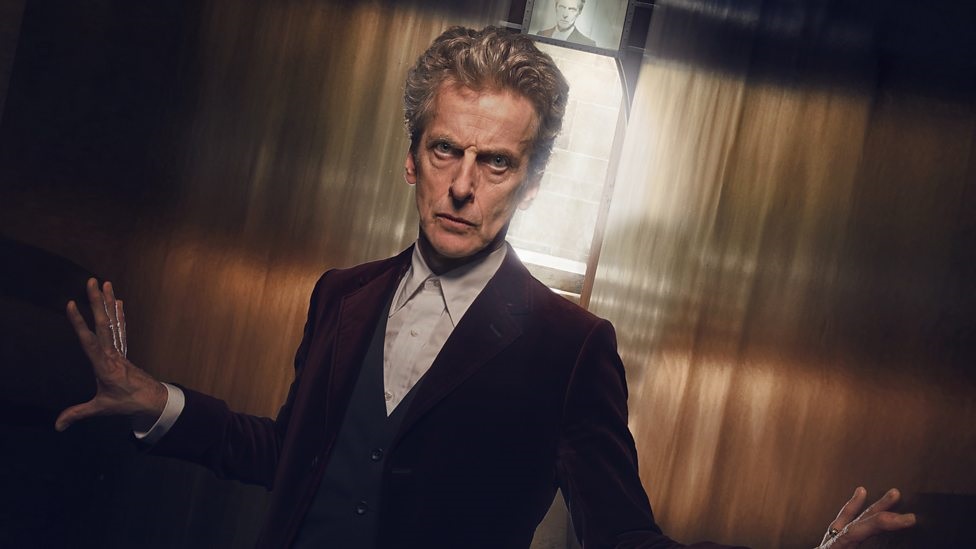 We’d be entirely remiss if we didn’t at least briefly discuss Doctor Who, the longest running science-fiction television show in history. The series has evolved well past its cheesy origins, where Daleks were made out of plastic tubes and toilet plungers. Today, BBC pours far more money into the show’s budget, producing some of the craziest and exciting sci-fi adventures you’ll find anywhere on TV. 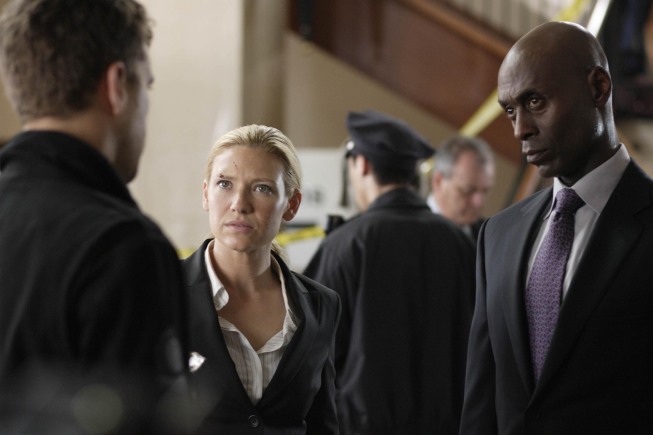 It should come as no surprise to see a show produced by J.J. Abrams check in on our list. Enter Fringe, a series that ran the gamut in terms of sci-fi intrigue. Over its five seasons, it dove into everything from genetic mutation and reanimation, to alternate dimensions and evil doppelgangers. The real driving force though was the iconic performance of John Noble as the resident eccentric genius of the story, Walter Bishop. Suffice it to say, it’s become an instant classic in the years following its cancellation.