8 Reasons Kurt Cobain Is Spinning in His Grave

With Nirvana set to be inducted into the Rock and Roll Hall of Fame during their first year of eligibility on Thursday, April 10, less than a week after the twentieth anniversary of iconic frontman Kurt Cobain’s suicide, both Nirvana and Cobain have been in the news a lot lately. Cobain himself hated the limelight and the ways that fame made it difficult to protect his privacy and maintain his punk rock ethos. Many stories that have popped up in the news recently are enough to make any Cobain fan cringe to imagine what Kurt would have thought of the various ways the media and others have used his image and music for personal profit. Here are some things in particular that would have Cobain rolling in his grave had he not been cremated.

Cobain’s widow Courtney Love made headlines when she said that she’s thinking about making a musical based on his life conveniently right before announcing that she has managed to bring together the classic Nineties line-up of her band Hole to record a new album. Love told NME that she’s considering a Broadway musical, a biopic, and a documentary about Cobain. The idea of a biopic has been tossed around for years and there have already been a few documentaries, but a song-and-dance act on Broadway about Cobain seems like an idea that would have completely repulsed the punk purist, whose biggest concern was always artistic integrity over entertaining the masses.

Love said that a musical is “very likely” should she be able to pull together a project that meets her standards. “There would have to be a story, and a great story, one that hasn’t been told before. I would devote countless hours with an A-team to create a project that reflects Kurt in the most respectful but honest way possible, so that his story, his music, and his legacy can be resurrected on stage for not only the world to see, but more importantly for our daughter to see. I know her father’s spirit will be on that stage, and sitting in that theatre with her will be the most emotional experience of our lives,” she said. 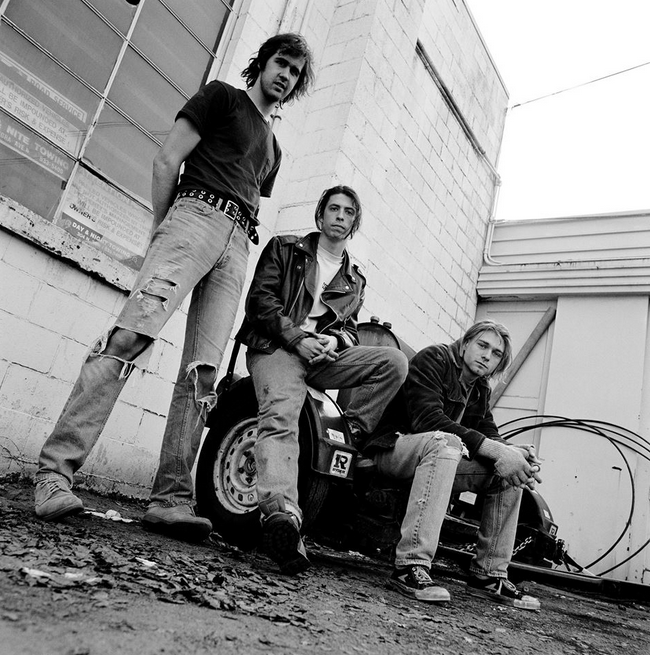 Last month, a prankster employee of Sub Pop records, the iconic Washington-based grunge label that released Nirvana’s first album, posted a fake ad on Craigslist claiming to be one of Cobain’s former roommates looking to sell a bunch of Cobain’s old stuff that he’d left after vacating the apartment they’d shared. The items included a pair of skis for $800, a Swatch phone that Cobain supposedly used to speak to record executives in Los Angeles when Nirvana was in the process of inking their major label contract for $575, and a TONY handheld video game that the writer claims Kurt enjoyed playing for $425. The writer of the ad explains that the items are of historical significance because they belonged to Kurt, which is why they are so expensive.

Derek Erdman later admitted that he was behind the prank ad and said that he’d received offers inquiring about all the items, which don’t actually exist but were compiled from photos found online. That Erdman managed to convince people Cobain actually skied is pretty funny (he wasn’t exactly the outdoorsy type), but it would be upsetting for the highly private Cobain to know that people were lining up to buy his leftover junk. 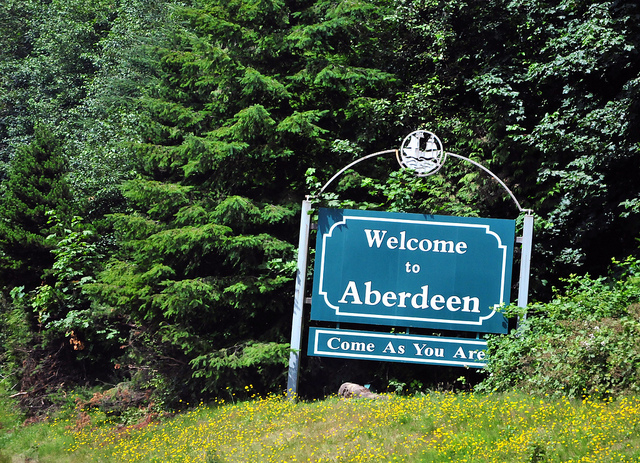 Holidays in His Honor

In order to properly ‘honor’ Cobain, two towns in Washington state where he formerly lived have both created official holidays celebrating him. Cobain is technically from Aberdeen, Washington, which declared recently that Cobain’s birthday, February 20, will henceforth be known as ‘Kurt Cobain Day.’ The neighboring town of Hoquiam, where Cobain lived for a short time, has introduced its own holiday, declaring that April 10 will be ‘Nirvana Day’ to honor the band’s induction into the Rock and Roll Hall of Fame.

Hoquiam major Jack Durney told local radio station KXRO that, “They bring great honor, I think as I say, to our entire community. And I think that it’s good Kurt Cobain lived in Hoquiam for a little while, but he and [Nirvana bassist] Krist Novoselic are part of our community, and I think it’s good to honor our sons and their great accomplishments.”

Having his own holiday is not something the highly private musician would have wanted in the first place, but especially not coming from communities that he very openly hated. “In Aberdeen, I hated my best friends with a passion, because they were idiots,” he said in a 1989 interview with the Daily of the University of Washington. Cobain had a rebellious adolescence, and he attributed much of the frustration he felt with the conservative nature of Aberdeen.

Cobain’s hometown of Aberdeen has been looking to capitalize on his memory for many years despite the fact that Cobain hated living there. Current mayor Bill Simpson has unabashedly said of the town’s Cobain-themed attractions, “We hope this is just as big as Graceland — eventually,” he said to a local news station per Spin. Aberdeen already has a Kurt Cobain Memorial Park and the famous bridge that is rumored to be a spot where Cobain lived during a brief period of homelessness (not true) discussed in the song “Something in the Way.” There’s also the Kurt Cobain walking tour and a section of the town’s history museum dedicated to Cobain’s life in Aberdeen. The sign welcoming visitors into the city reads “Come as You Are,” the title of a song from the band’s second album Nevermind.

As a part of Aberdeen’s efforts to make some money in tourist dollars from its celebrity connection, this year the town unveiled a hideous statue of Cobain crying as a new part of the Cobain exhibit in the history museum. “Aberdeen residents may justifiably take pride in the role our community played in the life of Kurt Cobain and the international recognition our community has gained from its connections with Kurt Cobain and his artistic achievements,” Simpson said at a local meeting planning out Kurt Cobain Day, per KXRO. You’d think they could have gotten a more capable artist to make the sculpture or chosen to maybe not depict him crying, but apparently the road to becoming the grunge Graceland is paved with bad statues.

The Dutch brewing Bavaria released a commercial last month that featured the aged lookalikes of dead cultural icons including Cobain, John Lennon, Marilyn Monroe, Tupac, and Elvis. The ad features all the stars hiding out on a tropical island and drinking Bavaria’s fruit-flavored beer, having faked their deaths in order to escape to paradise. The commercial not only attempts to profit from the likenesses of these stars (you can expect the company to hear from the lawyers of their estates shortly), but it also makes them look really dumb. Cobain giggles like an idiot when Lennon calls the island’s hot bartender “Jude” and flashes her a peace sign, then later throws up in his mouth when an 81-year-old Monroe’s skirt flies up, recreating her famous scene from The Seven Year Itch. Peddling bad beer is not something Cobain would have ever agreed to, much less in a way that makes him look undeniably stupid. 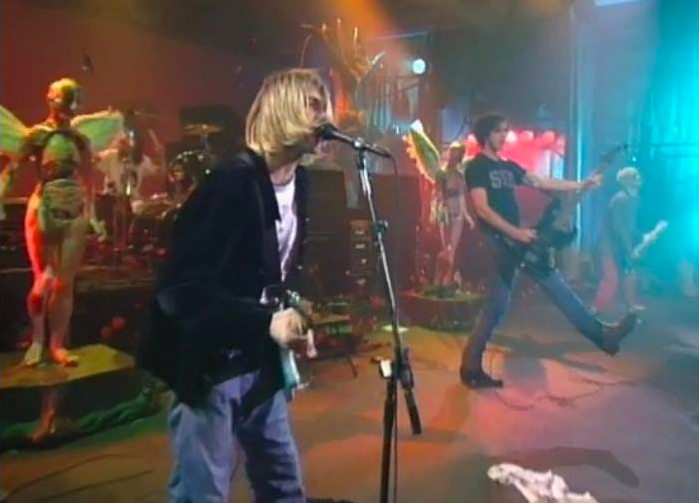 Induction into the Rock and Roll Hall of Fame

Nirvana is being inducted into the Rock and Roll Hall of Fame in the group’s first year of eligibility, 25 years after their debut album Bleach was released on Sub Pop records. Drummer Dave Grohl and bassist Krist Novoselic will attend the ceremony, as well as Cobain’s widow Courtney Love, who was held a decades-long feud with Grohl (she even once accused him of hitting on her 21-year-old daughter with Cobain, Frances Bean.)

Aside from the likely Grohl-Love drama, the Rock and Roll Hall of Fame is a bloated institution of the kind that Cobain hated, and to add insult to injury, the group is being inducted alongside Kiss, a band that is the epitome of everything wrong with rock and roll that Nirvana and the grunge movement as a whole were rebelling against. Watching the middle-aged men of Kiss decked out in makeup and leather performing “I Wanna Rock and Roll All Night” is something that would actually make Cobain throw up in his mouth. Luckily for those watching the ceremony, Kiss has refused to perform because only the original line-up is being inducted. 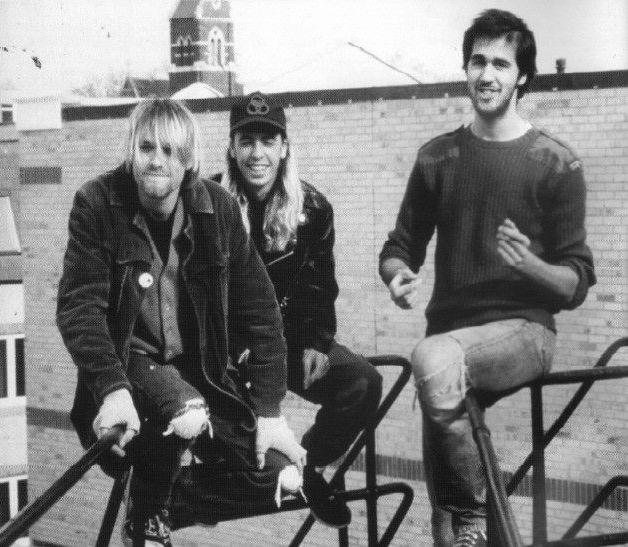 The Feud Between Hoquiam and Aberdeen

Two small towns in Washington state where Cobain grew up have been engaging in a PR battle over which gets to ‘claim’ itself as the frontman’s hometown, the prospect of tourist dollars gleaming for places where the economy has been ravaged by the decline of the logging industry. While Cobain is technically from Aberdeen, he did bounce around between different homes in Hoquiam as well during Nirvana’s early years. But here’s the thing — Cobain hated Aberdeen and small-town Washington in general and was very vocal about that hatred when he was alive.

“It’s a really small place,” Cobain said of Aberdeen in a 1992 interview for Monk Magazine. “A very small community with a lot of people who have very small minds. Basically if you’re not prepared to join the logging industry, you’re going to be beaten up or run out of town. They chased me up to the castle of Aberdeen with torches. Just like the Frankenstein monster. And I got away in a hot air balloon. And I came here to Seattle.”

New Photos From the Scene of His Death

This hurts me to see. One of Kurt Cobain’s newly released crime scene photos. You can see his fingers and his leg. pic.twitter.com/Gqi2wOIf94

Last month, the Seattle police announced they were doing what some had been calling for them to do for twenty years — reopening the investigation surrounding Cobain’s death. Conspiracy theories abound that there’s no way he could have committed suicide; given the immense amount of heroin in his bloodstream he wouldn’t have been physically able to pull the trigger of the shotgun that killed him after shooting up. Some have gone so far as to say that Courtney Love hired a hit man to kill Cobain so that he couldn’t divorce her.

Anyway, the police didn’t end up finding anything to make them change their minds on the suicide verdict, but they did discover a roll of undeveloped film consisting of photographs taken at the scene of his death. The photographs — which show Cobain’s suicide note, his drug paraphernalia, and the room where he died — were promptly released to the media, showing the closest thing we have to Cobain’s final moments — something anyone would prefer to remain private — to the world.