8 Things You Need to Know About ‘Battleborn’

Battleborn is one of the biggest games launching this year, but there seems to be a lot of confusion about what the game is. You’d be forgiven for being confused, because Battleborn isn’t quite like anything else out there. It has bits and pieces you’ll recognize from other genres, but it puts them together to form something unique. Since Battleborn launches on May 3 on PlayStation 4, Xbox One, and PC, now is a good time to answer the big questions about the game.

1. It’s a first-person shooter, with some ideas taken from MOBAs

First things first. You play Battleborn like a first-person shooter. That means you’ll run around blasting enemies through the eyes of your character. But it also takes many cues from multiplayer online battle arena games, or MOBAs. You start each match at level one, but you gain levels fairly quickly. For each level you earn, you can choose one of two abilities to unlock. Each of the games 25(!) characters has a different skill tree and fighting style, so there’s tons of room to experiment.

2. It’s from the makers of Borderlands 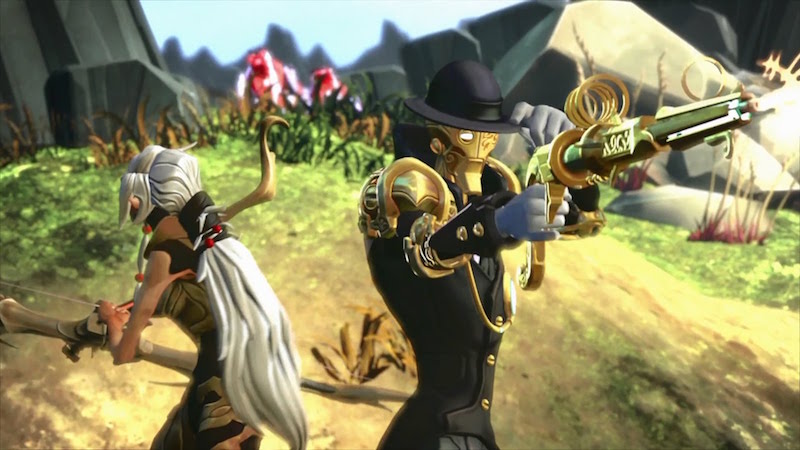 Heroes from Battleborn shoot it out against universe-destroying enemies. | Source: Gearbox Software

If there’s one thing developer Gearbox Software knows how to do, it’s make a great first-person shooter. The Borderlands series has been the developer’s focus since 2009, and has been consistently excellent throughout (heck, even the adventure game spinoff Tales from the Borderlands is fantastic). Borderlands players won’t have to look hard in Battleborn to find similarities between the two. The art, humor, and even parts of the UI are remarkably similar. That said, this game takes place in a very different world than Borderlands. 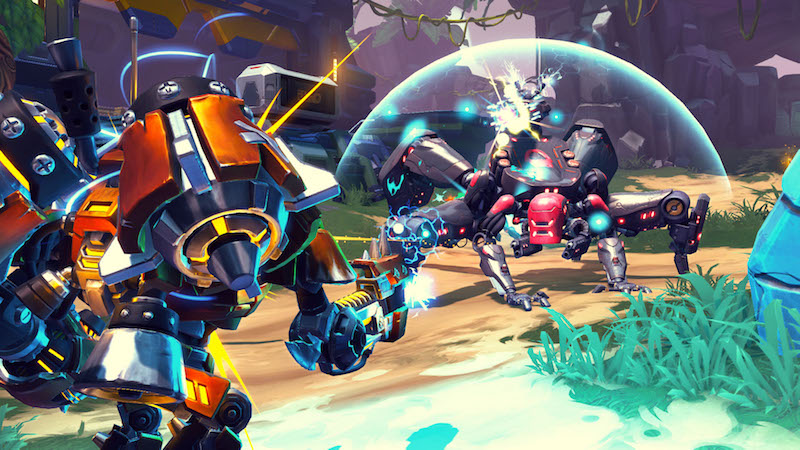 The standard apocalypse that destroys the planet Earth as we know it isn’t enough for this game. Not only has Earth been destroyed in Battleborn, but nearly the entire universe has been wiped out. Only one star remains, and it’s up to the various heroes to keep it safe from the clutches of an evil vampire and his army of extra-dimensional beasts.

This won’t come as a surprise to players who soaked up the delightful humor of Borderlands, but to risk understatement, Battleborn doesn’t take itself too seriously. Just watch the video above to get a sense of the game’s tone. The character roster includes a vampire, a luchador, a penguin, and even a mushroom. This isn’t your average shooter. 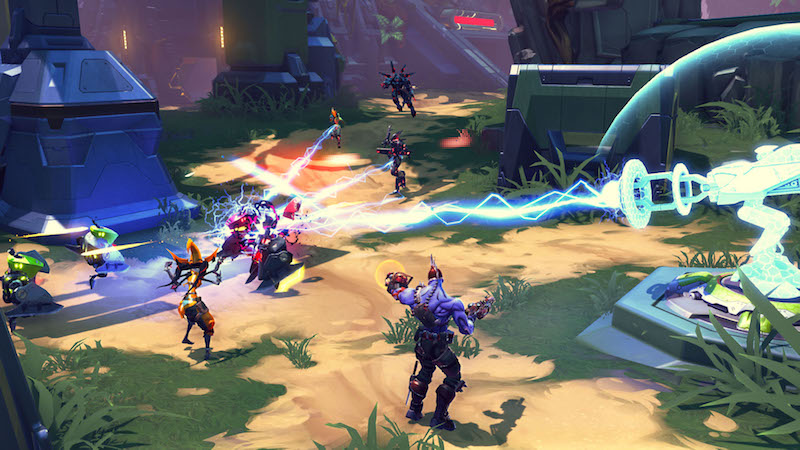 Along with the crazy lineup of hero characters comes a wide variety of weapons. Some characters fight with swords. Others favor their fists, claws, guns, spells, projectiles, bow and arrow, or rocket launchers. And that’s only scratching the surface of the large roster of heroes. This game is packed full of characters, and each one has their own preferred fighting style and personality.

6. It comes with four modes 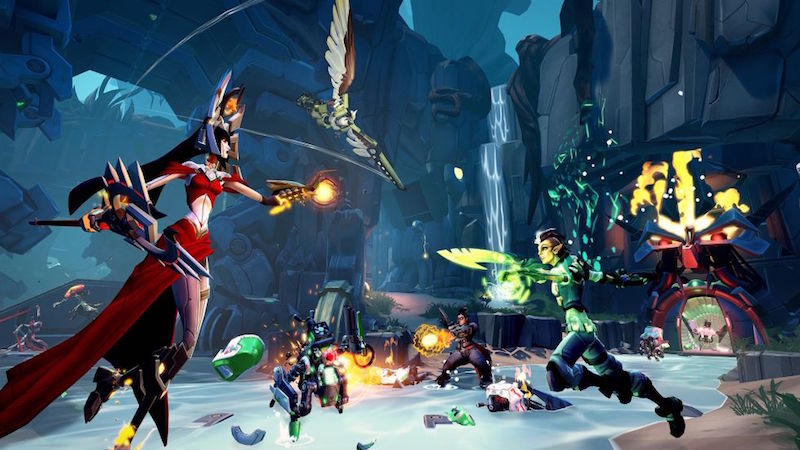 Like most online games worth their salt, Battleborn comes with a healthy variety of modes. Unlike some other recent online games, Battleborn has a campaign. You can play through it solo, or with friends either online or locally via split-screen.

It also has a handful of player vs. players modes. In Capture and Incursion modes, you’ll go up against other players to control points on the map. In Meltdown mode, you must protect tiny robots as they march into the maw of a giant robot. Safely deliver more of them to their death than your opponent, and you win.

7. You earn credits and experience points 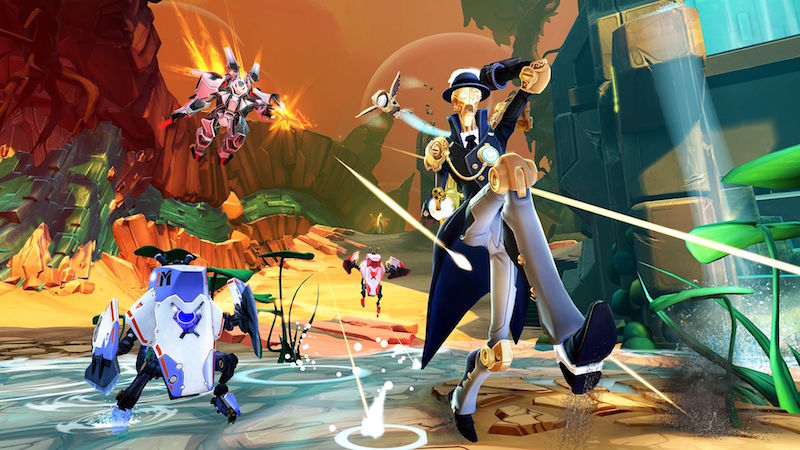 As you play, you earn credits you can spend on things like character skins and taunts. You also earn experience points that let you fill out your character’s skill tree to make them more powerful. Thankfully, since the game has so many characters, it lets you try out a fully leveled-up version of any character for a single campaign mission or online match. That should help you decide which of the 25 fighters you want to focus on. 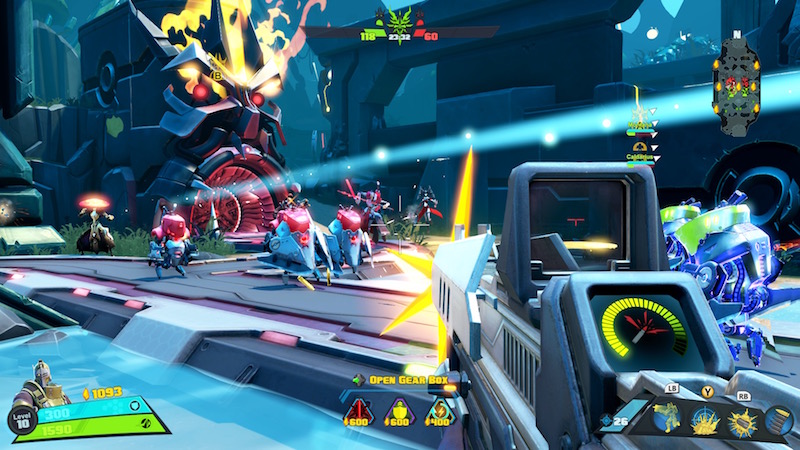 Updates are heading our way in Borderlands. | Source: Gearbox Software

At some point after the game launches, everyone will get five more heroes for free. After that, the plans become more vague, but Gearbox promises more modes, maps, and balance updates will launch for free for everyone.

On top of that, five paid content packs are planned. They’ll cost $5 each and will include a new story operation, plus new skins and taunts. If you’re sure you want to buy them all, you can opt for the $20 season pass, saving yourself a fiver.

Overall, Battleborn shows a lot of promise. It also has tons of personality that will help it stand out against other recent online shooters that are absorbing gamers’s time, like Destiny and The Division. Whether it will have the legs to stay in your gaming rotation for long remains to be seen, especially with competitors like Paragon and Overwatch hot on its heels.