Name a prominent media outlet left of Fox News and we’ll bet they ran a column (several, most likely) by someone disgusted with the rehabilitation of George W. Bush in the past two years.

Certainly, New York Magazine and The Huffington Post hardly allowed a lozenge to exchange hands at a funeral without reminding you of W’s laundry list of failures. Well, it’s a good thing they did. Folks who came of age earlier this decade could use the reminder (even if it’s become repetitive).

“Dear Democrats: Stop rehabilitating George W. Bush” was the headline from a Washington Post piece late in 2017. In it, James Downie pointed out that Bush would cry for civility one day and campaign for Ed Gillespie (or Screamin’ Brett Kavanaugh) the next.

You’ll find more of the same (in no chronological order) at The Chicago Tribune, Splinter, and other outlets. (In one particularly spirited bludgeoning, Truthdig’s Jacob Bacharach summoned all his literary powers for the job.)

All things considered, we wouldn’t expect anything less for a president who sent thousands of troops to death in Iraq without reason; one who watched New Orleans drown from a plane; and, on his way out of town, plunged the nation into the Great Recession. But people forget and, over time, start to forgive.

After all, Bush didn’t completely melt down before taking office. And he smiled often and actually admitted mistakes later. In other words, he’s looked all right to many folks — at least compared to the bottomless pit that is Donald Trump.

Unfortunately for America’s 43rd president, things could very well turn back the other way on Christmas Day. That’s when Adam McKay’s Vice opens, and it should halt the George W. Bush rehabilitation project for the foreseeable future.

To quote McKay in a recent Hollywood Reporter interview, “George W. Bush is really going to hate this movie.”

McKay’s take on the Bush years

In the trailer for Vice, we encounter the gullible Bush hoping to get Dick Cheney to join his administration. While it’s a familiar image — the cold, calculating Cheney with the oblivious W — McKay hints of the many angles his film will take on the presidency.

Cheney, played by a transformed Christian Bale, says he’ll agree to be Bush’s vice president if he can handle “the more mundane jobs.” Among them are “bureaucracy, the military, energy, and foreign policy.”

What’s left for the actual president, you might ask? We’ll see how McKay covers it in his film, but he offered clues about how he approached the subject of the 43rd president in The Hollywood Reporter.

I think there’s going to be a backlash from the Bob Woodwards of the world, who went the opposite direction with the [Bush] narrative. Their idea was, ‘Bush is smarter than you think. He actually did a lot.’ I did a lot of research on that. And boy, do I strongly disagree. I couldn’t find any evidence that Bush was surprisingly competent. I just didn’t see it.

Even if your vice president was the one pulling the strings on a number of fatal moves, the blame always falls in the president’s lap. Just ask people who lost loved ones in Iraq or New Orleans. Or those who saw their family’s lives changed forever in other ways as a result of Bush administration policies.

The man who left office at 25% approval 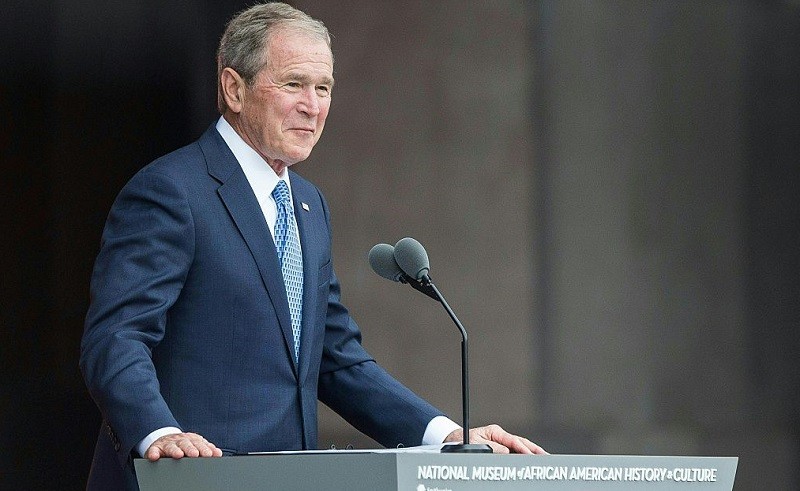 While Bush’s popularity crept above 50% even among Democrats in 2017, it was a long way from the late days of his administration. In November 2008, W sported a horrid 25% approval rating, with 70% disapproving of his job performance. (At the time, these numbers set new records.)

A few years earlier, voters had kicked Republicans out of control of both the House and Senate in a brutal midterm election. And they went on to elect Barack Obama, taking away the only remaining GOP stronghold in the government (i.e., the executive branch).

For anyone who lived through the Bush 43 administration, the results of these elections weren’t surprising. Between his disastrous response to Hurricane Katrina, the embrace of torture, the utter mismanagement of two wars, and incompetence in economic policy, the only surprise is how easily people forgot.

In a poll of 109 historians in 2008, more than 60% said Bush was the worst president in U.S. history. If McKay’s film hits its mark, it’ll take more than a few smiles and hard candies to keep the memories from coming back.