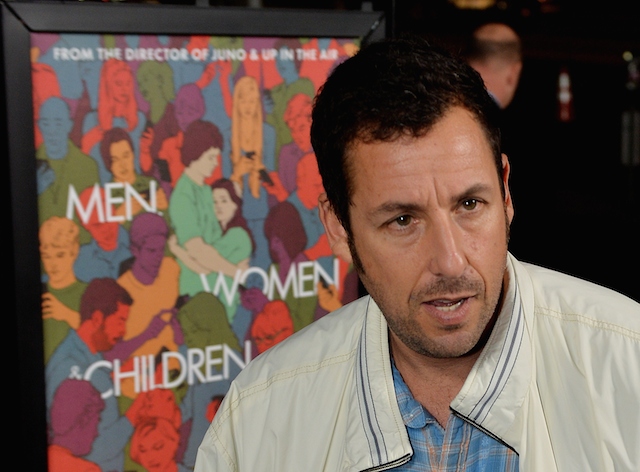 Just days after Netflix announced a controversial deal with the Weinstein Co. to debut the sequel to Ang Lee’s Academy Award-winning Crouching Tiger, Hidden Dragon on the streaming service at the same time as in select IMAX theaters, the company has revealed even more plans to hit the movie business where it hurts — right in the box office. Netflix has cut a deal with comedian Adam Sandler for the actor to make four movies under his Happy Madison production company that will debut on the service rather than in theaters, according to a report from Deadline.

“People love Adam’s films on Netflix and often watch them again and again,” said Netflix Chief Content Officer Ted Sarandos, per the publication. “His appeal spans across viewers of all ages — everybody has a favorite movie, everyone has a favorite line — not just in the U.S. but all over the world.”

“When these fine people came to me with an offer to make four movies for them, I immediately said yes for one reason and one reason only: Netflix rhymes with ‘wet chicks.’ Let the streaming begin!” Sandler said, using the type of humor that fans of the actor find hilarious. Deadline pointed out that while some of the recent Happy Madison movies — like the Drew Barrymore co-starring Blended — haven’t performed so well critically or at the box office, Netflix could provide Sandler with the right platform.

When Netflix announced that it would begin streaming Crouching Tiger, Hidden Dragon: The Green Legend on the same day it opens in theaters, major theater chains responded by saying they would refuse to show the movie. The top American theater chains Regal, AMC, Carmike, and Cinemark have all said they won’t screen the movie when it comes out next year. The top theater chain in Europe, Cineworld, also came out in opposition to the deal and said it wouldn’t show the movie.

“We bring our customers the IMAX experience as the complete opposite of home entertainment, which can be found on all sorts of smaller, every day screens like the TV or smartphones and devices. We believe that the theatrical experience and IMAX, as one of its cornerstones, should be kept apart from home entertainment,” Cineworld said, per Deadline.

It’s understandable that theaters are feeling a bit touchy about Netflix encroaching on their territory, as the box office is already struggling. This summer was one of the worst the box office has seen in recent years and analysts have said that this fall and winter’s films won’t be able to make up for the summer’s awful performance. The box office take this summer fell a whopping 15 percent versus summer 2013 and the domestic box office draw was down 5.6 percent at the year to date as of the end of the summer. More competition is more bad news for movie theaters.

Sarandos said that he believes releasing movies simultaneously on Netflix and in theaters is just a different approach and doesn’t have to compete directly with conventional theater releases. “What I am hoping is that it will be a proof point that the sky doesn’t fall,” he told The New York Times. “These are two different experiences, like going to a football game and watching a football game on TV.” Netflix believes that the traditional model for releasing films in the theater and then making people wait several months for them to become available for home viewing is outdated and not something that consumers should have to deal with.

IMAX CEO Richard Gelfond told Deadline that the companies were hoping the deal to screen The Green Legend on August 28, 2015 would actually help theaters during one of the worst box office weekends of the year. “We would not have done this release if there were competitive Hollywood blockbusters at that time. In fact, we helped to influence Netflix to release it at that time. The thought was, when you have a weak shoulder period, why not try something different?” Gelfond said.

The thing with that point of view is Netflix doesn’t have anything to lose if the experiment is successful, while movie theaters are worried that home viewing could replace the theater-going experience. Netflix has already changed the television landscape by inventing the concept of binge-watching and creating the award-winning original series House of Cards and Orange Is the New Black. Now it’s looking to change the movie world, too, and the idea of that change is making theaters nervous.

Theaters can’t really protest the Sandler films the way they are The Green Legend because it doesn’t look like the Sandler movies will show in theaters at all, but that is even worse news for the box office. If Netflix can get big stars like Sandler to make new movies for them and bypass theaters as a whole, then the streaming service will be actively replacing the role of the movie theater.