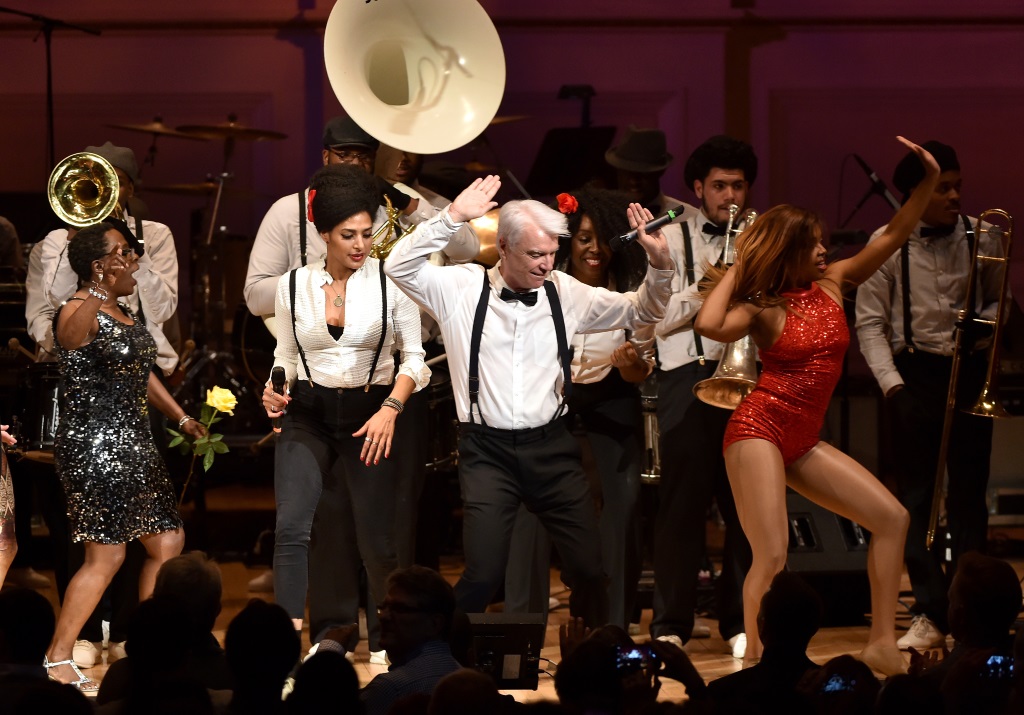 Pinning down new wave’s exact sound is an exercise in futility. Bands with backgrounds in synthpop to punk to the avant-garde have all fallen under the new wave umbrella, confounding music critics and fans. However, it is possible to discern some specific tenets shared by every great new wave band. The genre initially formed as a reaction to the easygoing, blues-heavy soloing of conventional rock and roll. Instead, new wave groups favored angular guitar riffs, fast-paced drums, and lyrics laced with sarcasm and melancholy.

New wave also marked a time in the 1970s when bands were incorporating a variety of sounds into rock music. The dawn of synthesizers defined some groups, while others took inspiration from reggae and the newly emerging punk movement. Due to the genre’s confusing set of characteristics, sorting through the catalog of new wave bands can be difficult.

Thankfully, we’ve sorted through the murk to compile a list of 25 albums every new wave fan needs to hear.

The Police’s 1983 opus Synchronicity epitomized every element that made the group a household name. Sting and company fused glimmers of reggae with funky rhythms while layering subtly political vocals over the top. The record also contains one The Police’s most famous numbers, “Every Breath You Take,” which details a tale of stalking dressed up as a wedding-ready ballad.

Blondie’s lead singer Debbie Harry was a master of straddling multiple worlds. She managed to fit in with New York City’s rising art-punk scene in the late ’70s while making catchy songs that climbed the charts. Parallel Lines presents both sides of Blondie, where songs like “Heart of Glass” paired sharp lyricism with infinitely danceable grooves.

The Human League’s plinky synthesizers helped to define the sound of new wave. Whereas other bands only briefly experimented with newly emerging electronics, the English new wavers put technology at the heart of their sound. On Dare, they manage to fill icy synthesizers with human warmth, most notably on the lusty track “Don’t You Want Me.”

Equal parts punk and new wave, X-Ray Spex was one of the most unique groups in the movement. The female-fronted group channeled the pointed punk lyricism of contemporaries such as Patti Smith, but added a childlike glee through campy keyboards and blustery horns. Germfree Adolescents was arguably its best record, packed with color and imagination.

In a pointed review of The Pleasure Principle, rock critic Robert Christgau described the album as “metal machine music goes easy listening.” While some may take that as a snide criticism, it perfectly encapsulates why Gary Numan was one of the godfathers of new wave. His delicate songwriting found a balance between pop perfection and Kraftwerk’s droning electronic experimentation.

Outlandos d’Amour showcases an exciting time in The Police’s history when the group was just starting to form the building blocks of its sound. Unlike later records that showcased more reggae and pop sensibilities, a ferocious punk energy charged this 1978 album.

7. Juju – Siouxsie and the Banshees

Casting off the cheesier elements of some new wave bands, Siouxsie and the Banshees always preferred darker moods. Guitarist John McGeoch’s sinewy guitar lines rivaled that of Sonic Youth’s Thurston Moore, while the drums and bass played off each other in funky bursts. Juju remains a hallmark of the band’s career thanks to these elements and the ever-enigmatic frontwoman Siouxsie Sioux.

On the other end of the new wave spectrum, The B-52’s reigned supreme with unabashed kitsch enhanced with pop genius. The Athens, Ga.-bred group shook up the ’70s rock scene with its eponymous debut, packed with countless hits including the wonderfully inane “Rock Lobster.” In its following albums, The B-52’s quickly became a poster child for new wave due to its outlandish style and fearless creativity.

9. This Year’s Model – Elvis Costello and the Attractions

Critics from Rolling Stone to Pitchfork have praised Elvis Costello’s 1978 masterwork, This Year’s Model. The record showcased some of Costello’s most singular-yet-accessible songwriting. It incorporated a number of different stylistic influences, with punk, classic rock, and new wave quirkiness all coming out to play.

In its sublimely carefree music, British new wave outfit XTC channeled the blissful naivety of adolescence. Its 1986 record Skylarking proved to be the culmination of that nostalgia. Tracks like the gorgeous opener “Summer’s Cauldron” brought soaring melodies and angular grooves together, anticipating shoegaze while raising the bar for new wave as a whole.

Most people don’t think of ska as a genre of the ’70s, but U.K. band The Specials explored it before acts like Sublime and Catch 22 were formed. On its eponymous 1979 record, The Specials channeled reggae’s bombastic horns with groovy dance beats and a brand of cynicism endemic to the U.K. Add on to that production from Elvis Costello and you have a recipe for a new wave classic.

Any music fan will be hard pressed to find a debut as strong as Devo’s timeless Q: Are We Not Men? A: We Are Devo!. From the first “yeah yeah yeahs!” on opener “Uncontrollable Urge,” Devo established itself as a disruptive force in modern rock and roll. Singer Mark Mothersbaugh projected his high-pitched shouts over angular guitars and ramshackle drums, forming a template for new wave sensibilities.

Nearly every song on Duran Duran’s sublime 1982 record Rio has become a classic, drawing praise from fans and critics alike. Unlike some of the more punk leaning new wave groups, Duran Duran embraced the world of radio-ready pop anthems. However, the synth-heavy band never sacrificed a shred of originality along the way.

There’s no doubt that a-ha’s breakthrough record Hunting High and Low is a touchstone of ’80s style thanks to dated drum machines and day-glo synthesizers. The Norwegian band represented the most unabashedly mainstream side of new wave music. In spite of its embrace of pop tropes, a-ha deserves respect and needs to be heard in order to understand the full spectrum of new wave.

Channeling everything from philosopher Albert Camus to teenage angst, The Cure’s sound was a pastiche of esoteric influences and visceral passion. Its compilation album Boys Don’t Cry is a perfect starting point to explore the group’s more conventional tunes before Robert Smith pivoted from new wave to goth.

17. Music for the Masses – Depeche Mode

The title of Music for the Masses is a blatant joke, poking sardonic fun at calls for Depeche Mode to craft more commercially pleasing music. Yet even when trying to please a specific niche, the gloomy new wave outfit ended up creating a commercial classic that still brings in new fans.

18. Songs from the Big Chair – Tears for Fears

Even though the British group released a strong debut, Tears for Fears hit its stride on the excellent sophomore album Songs from the Big Chair. A trumped up drama charged countless songs on the record, making hit singles such as “Head Over Heels” shine with an emotional immediacy. The record is a rare instance where emotional complexity marries perfectly with danceable rhythms.

Like many new wave bands, Nick Lowe used the conventions of mainstream rock music to criticize its commercial feel. His debut record Jesus of Cool brims with cynicism on tracks like the brutal “Music for Money.” Despite his blatant criticism, Jesus of Cool is a surprisingly fun record packed with infectious melodies and three-chord bliss.

Calling The Cure’s 1989 release Disintegration a new wave album is a fatal oversimplification. The wildly influential record is the ultimate culmination of every style Robert Smith chased over The Cure’s career, from pure melancholia to shimmering textures. New wave flourishes color the album, but it succeeds because it breaks from the constraints of any specific genre.

21. Ocean Rain – Echo and the Bunnymen

Over two decades since its release, Ocean Rain remains a polarizing record. Critics attacked Echo and the Bunnymen for heavy handed lyrics and nauseating optimism. Others praised the intricate string arrangements and irregular song structures. Love it or hate it, Ocean Rain deserves its place in new wave history due to its unique atmosphere and idiosyncratic ideas.

Anyone with a love for ’80s music will get chills down their spine upon hearing the classic opening guitar riff from Power, Corruption, and Lies. The English synthpop group’s sophomore record improved in nearly every way from its debut, establishing New Order as an independent force in the new wave movement.

Incredibly, it only cost Elvis Costello 2,000 euros to record his debut record that went onto launch him into stardom and help define new wave. The enduring appeal of My Aim is True hinges on Costello’s captivating earnestness and his sprightly power pop songwriting. While the record doesn’t contain some of his more experimental touches, it anticipates them and stands on its own as a classic in the new wave canon.

It’s nearly impossible to overstate the importance of Remain in Light. Though the record largely discounted the input of bassist Tina Weymouth and drummer Christ Frantz, it is arguably the most revolutionary album in Talking Heads’ discography. Lead singer David Byrne incorporated newfound African influences with his usual paranoid songwriting, creating sprawling grooves at once joyous and anxiety-inducing.

It’s sad to realize today’s fans will likely never see The Smiths perform live again. Singer Steven Morrissey and guitarist Johnny Marr now share a famous animosity, but The Queen is Dead showcases a time in which the two were at a Lennon/McCartney level of songwriting. Morrissey’s brutal wit took down royalty and the music industry, while Marr’s furious strumming kept the songs fit for dance floors.