‘Alien: Covenant′: Everything We Know (So Far)

For a while, there was some back-and-forth as to whether Ridley Scott’s 2012 sci-fi flick, Prometheus, would ever actually get a sequel. But after several stops and starts, Alien: Covenant is done filming and is set to hit theaters in May. Over the last few months, Scott has been dropping hints as to what exactly fans can expect from the anticipated follow-up film. Here’s everything that we know about the sequel so far:

1. The movie will introduce a new set of travelers 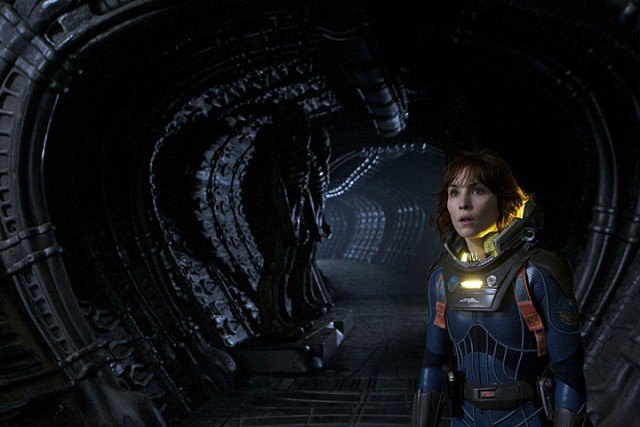 While Michael Fassbender’s David will be back for the new quest, he won’t be on the journey alone. In a recent interview, Scott confirmed that audiences will be meeting a new group of space travelers in the anticipated sequel.

“[The travelers] are going to the planet of the Engineers and they are going to see what happened there. It was a disaster. And they will be in that alien craft that takes them there, but with a new group that’s incoming, a new group of travelers in the beginning of the first act,” the director described.

The synopsis for the movie reiterates this idea, reading: “Bound for a remote planet on the far side of the galaxy, the crew of the colony ship Covenant discovers what they think is an uncharted paradise, but is actually a dark, dangerous world – whose sole inhabitant is the ‘synthetic’ David  Fassbender), survivor of the doomed Prometheus expedition.”

As Scott has previously confirmed, Fassbender is set to reprise his role of the mischievous, realistic droid David in the sequel.

But that’s not all. The actor has revealed that not only will he return to his original role  in the Prometheus sequel, but that he’ll also be playing an identical synthetic character. “I am allowed to say I am playing two robots – Walter and David,” he told The Irish Times. “I think what’s great about it is that Ridley has gone back to the original DNA of Alien, the horror element of that. But is also has the scope and the scale of Prometheus.”

As for Fassbender’s former co-star Noomi Rapace, it seems she won’t be reprising her role as Elizabeth Shaw in Alien: Covenant. When asked by the Daily Mail newspaper whether or not the actress would be involved, Scott replied with a definitive “no.” However, some have speculated that Scott’s comments could be a misdirect, as Rapace was rumored to be seen on set shortly after. The studio has not commented on her possible participation in the movie.

A recently released prologue video for Alien: Covenant shows exactly how the film connects to the last entry in the franchise, Prometheus. 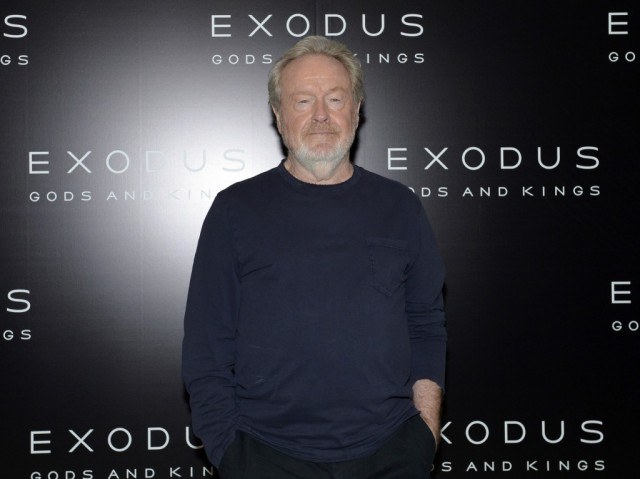 As we all know by now, Scott will once again return to direct and produce the Prometheus sequel, based on a script originally drafted by Michael Green (Heroes, Green Lantern).

John Logan, the scribe behind Bond films Skyfall and Spectre, has also recently been brought on board to revise Green’s script alongside Scott. It’s unclear just how much impact the revisions will have on the previously teased plot details and title. 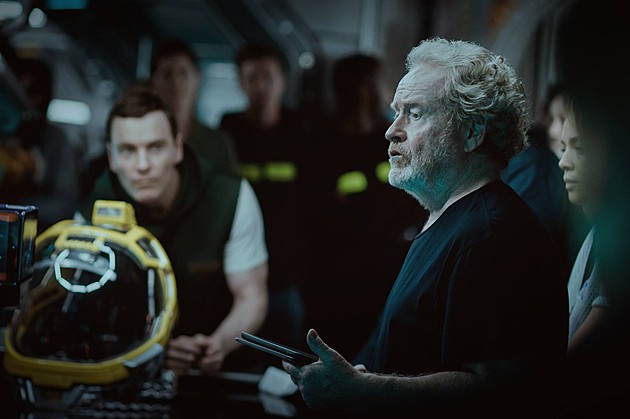 4. The title was changed

Though the movie was being referred to as Prometheus 2 for many years, Scott confirmed early on that that wouldn’t be the official title. However, the film has undergone multiple title changes over the course of its development. In September 2016, Scott told HeyUGuys that the movie would be titled Alien: Paradise Lost.

He eventually changed his mind again stead, ultimately settling on Alien: Covenant as the title. As fans know, Alien: Covenant pays homage to the franchise that bore it, Alien.

5. This won’t be the only sequel

Scott has said that the upcoming Alien: Covenant will be the first of several planned Prometheus sequels, each of which will eventually circulate back to the first Alien. “Prometheus 2 will start getting shot in February and I’ve already begun now so I know what the script is,” he explained. “Then there will be another one after that and then maybe we’ll back into Alien 1, as to why? Who would make such a dreadful thing?”

Scott went on to explain that he regrets stepping away from the Alien franchise, and is hoping to right the ship with Prometheus. “I’m trying to keep this for myself. I let the other one [Alien] get away from me — I shouldn’t have … I’m trying to re-resurrect the beast and let if off the hook for a while because I’m coming back into the back-end of Alien 1. I’m gradually getting to Alien 1,” he said.

More leaked images obtained by the Daily Mail from the set of Alien: Covenant show dozens of humanoid beings in death throes. Images can be viewed here (Warning: May contain spoilers!). 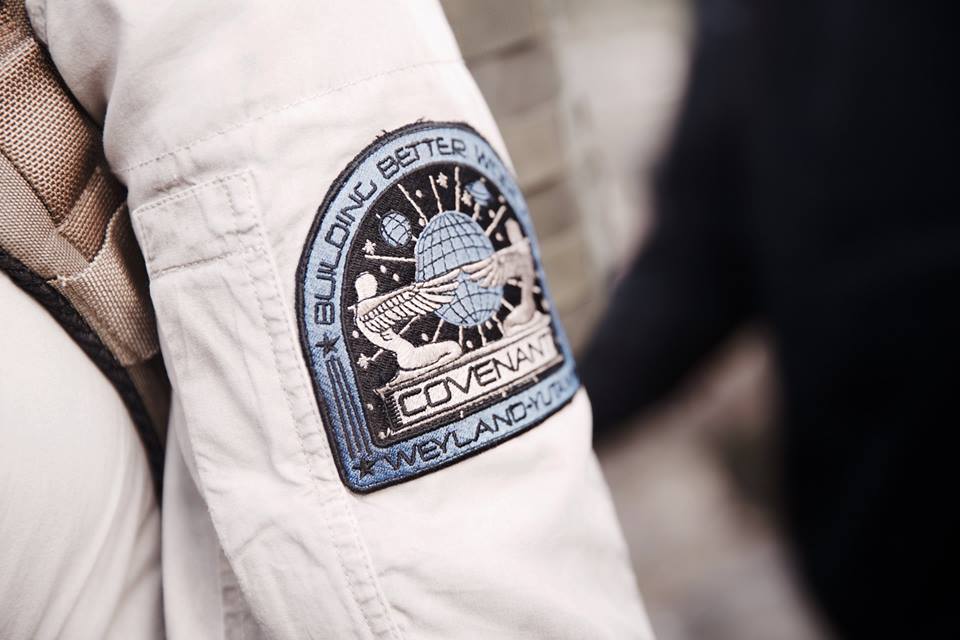 The first official image from Alien: Covenant has been posted to the Alien anthology Facebook page. The image reveals what looks to be a crew badge from the title ship, the Covenant, bearing the logo of the Weyland-Yutani Corporation.  “It’s official! Weyland-Yutani will be in #AlienCovenant!” the film’s Twitter page revealed.

While not much is known about the type of aliens that will be featured in Alien: Covenant, Micahel Fassbender recently reveled what they will be called. In an interview with BBC Radio 2, Fassbender noted that the creatures will be called Neomorphs, rather than the Xenomorph aliens seen in the original Alien movies.

Additionally, according to sources cited by AvPGalaxy.net, the Neomorphs are a mutated version of the creatures that grow in pods on trees and infect the crew via spores. Once they have matured, the creatures burst through the hosts’ backs or throats — a slight variation on the “chestburster” creatures seen in the original Alien movie.

Leaked images of the Neomorphs and more have been obtained by SoIsItAnyGood. An image of what appears to be an alien egg chamber can be seen below. 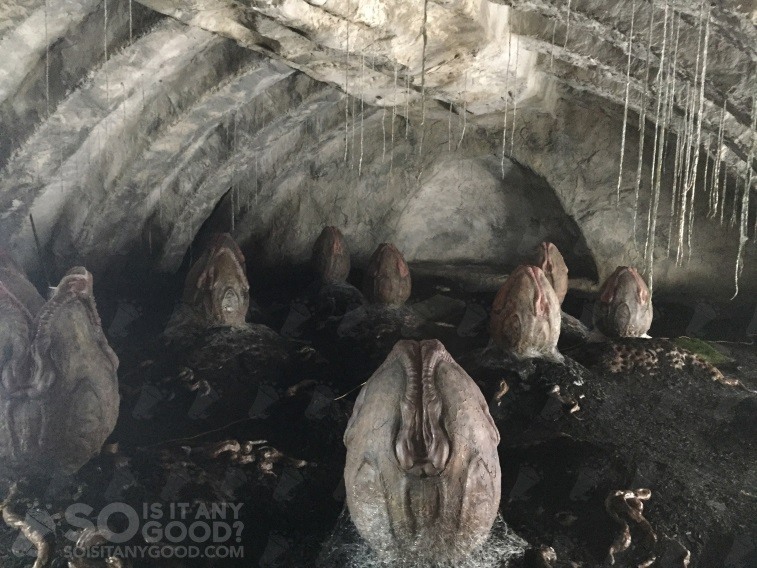 8. What else we’ve seen so far

As if buzz for Alien: Covenant wasn’t already off the charts, 20th Century Fox released a clip that introduces the crew of the Covenant mission as they prepare for cryosleep. In the clip, the crew kicks off a raucous celebration after the captain (James Franco) goes to bed after telling everyone he doesn’t feel well. Suddenly, one of the crew members begins to gasp and choke, which — if you know anything about the Alien franchise — will cause you to instinctively brace yourself for a chestburster’s arrival. Fortunately, after a stiff back slap from the android Walter (Fassbender), it appears that she simply choked on some of the infamously bad food aboard the company’s spaceships. Or did she?

In March 2017, another Alien: Covenant promo dropped. The clip is a commercial from the fictional Weyland-Yutani Corp to advertise the newest line of androids called Walter. The video shows a group of masked individuals building an android with a wire skeleton. The scientists eventually create a complicit-looking Fassbender, who – when asked for his name – replies: “Walter. We are Walter.” The commercial’s tagline then reads, “The all-new Walter. Created to serve.”

Alien: Covenant is scheduled to hit theaters on May 19, 2017. Check out the first poster below.