All the ‘Friends’ Thanksgiving Episodes, Ranked

It’s a rite of passage for any sitcom on any network – the Thanksgiving episode. And when it comes to one of the greatest shows of all time – the iconic comedy about six friends trying to live and love in New York City – there are ten seasons and ten Thanksgiving episodes to enjoy. 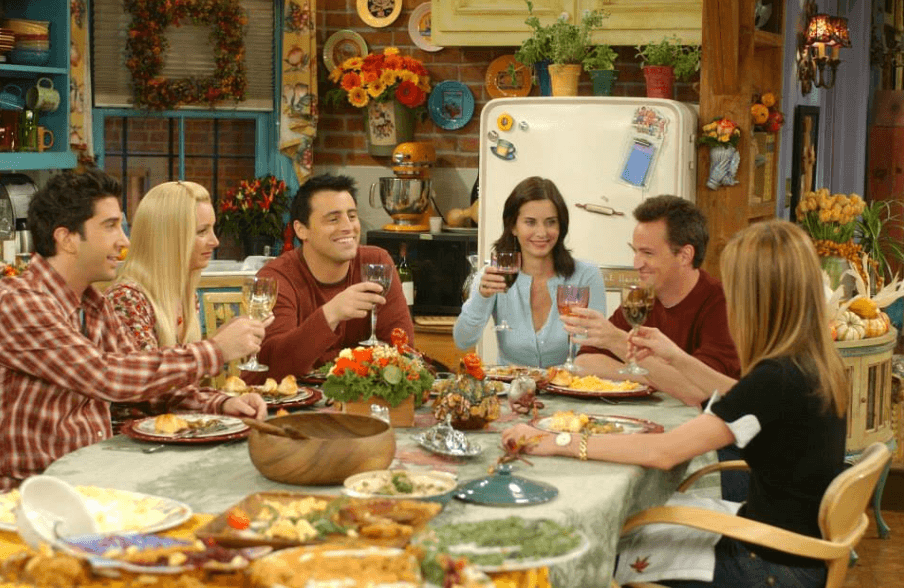 “This is all a moo point. It’s like a cow’s opinion, you know, it doesn’t really matter. It’s moo.”

Joey’s famous line from this Thanksgiving-themed episode does a good job describing how it all goes down. Plenty of weird things happen, like when Chandler pretends to be allergic to dogs even though he really just doesn’t like them. Phoebe hides a dog in her room and then Monica helps her move the dog to Ross’ apartment.

Meanwhile, Rachel is obsessed with her gorgeous new (and young) assistant Tag, who winds up joining the gang for dinner. As Thanksgiving episodes go, it’s not the best – but it’s still worth watching.

This one isn’t fully Thanksgiving themed because it’s more focused on adding to the narrative surrounding the Ross + Rachel relationship. In it, Ross makes a list of Rachel’s flaws so he can decide whether he should be with her or with Julia. Of course, Rachel finds the list and gets upset over it.

Meanwhile, Monica creates a synthetic “mockolate” that brings some much-needed humor into the situation, but it’s not enough to make this Thanksgiving episode better than just ok.

Plenty of critics believe Friends should have ended a few years before it did. Season 10 is a great example of why they say that.

In this episode, Rachel and Phoebe put Emma in a baby beauty pageant, Chandler gives up a Rangers ticket, Monica and Chandler lock everyone out, and a fight breaks out when everyone shows up late for dinner. It’s all a little weird and forced until the end when Monica gets a phone call confirming she and Chandler were selected to adopt a baby in Ohio. That moment alone makes the episode worth watching, even with all the other strange events.

7. “The One Where the Underdog Gets Away – Season 1

This was the ninth episode of the series and helps establish the characters and their deeper motivations. Monica and Ross choose to celebrate Thanksgiving at her apartment because their parents are gone. Rachel can’t afford a plane ticket home, so she comes too. Joey’s acting career leads him to star on a poster to VD, which means his family won’t let him come home for fear of contracting the disease themselves. Chandler takes a stand against “pilgrim holidays” because his parents are divorced. Phoebe reveals that she celebrates two Thanksgivings and joins the gang for one of them.

Monica makes a delicious Thanksgiving meal and everyone gathers in her apartment. Isn’t that what it’s all about?

There’s a lot of kissing in this Thanksgiving episode. Chandler kisses Kathy, which makes Joey move out. Monica kisses her ex-boyfriend Richard’s son Timothy. But the best part of this episode is the one referred to in the title – Chandler gets into a box and stays there for six hours to prove his loyalty to his best friend, Joey.

Obviously, any episode guest starring Brad Pitt is bound to be exceptional.

Monica invites her “really overweight” friend Will to Thanksgiving dinner and everyone is shocked when he shows up looking fit and handsome. He’s annoyed to see Rachel, who used to make fun of him in high school. It comes out that Ross and Will were members of the “I Hate Rachel Green Club” and even made up a rumor that she was a hermaphrodite.

The high school drama may be a bit overwrought, but it is entertaining to watch Joey polish off a 19-pound turkey solo.

Christina Applegate won an Emmy for her portrayal of Rachel’s sister Amy in this episode, and it was well deserved. She plays a total rude character convincingly and insults every cast member in some way. One of the worst – or best – moments is when a physical fight breaks out between Rachel and Amy.

A dysfunctional family Thanksgiving is so relatable, and seeing it played out here even in a dramatic fashion is refreshing and entertaining.

This episode has it all – sibling rivalry between Ross and Monica, another rivalry between the gals and guys, Chandler and Joey fighting over a girl, and a friendly yet decidedly tense game of football. For once Thanksgiving isn’t in the apartment, but rather the central action takes place outside with a new competitive feel that’s palpable. It’s great entertainment with a generous side of Thanksgiving.

2. “The One With the Thanksgiving Flashbacks” – Season 5 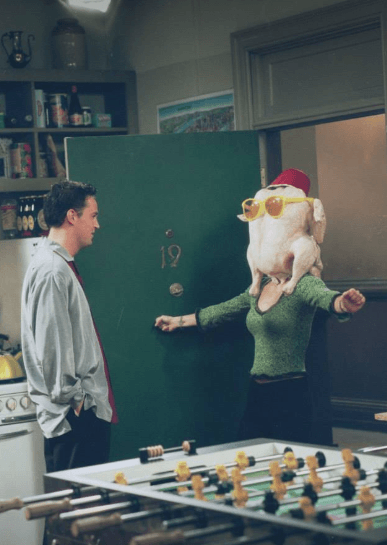 One thing Friends does brilliantly is flashback episodes, and this Thanksgiving-themed version is no exception. Every person remembers their worst Thanksgiving ever including the one where Phoebe’s arm was blown off during World War I (in a previous life) and Monica accidentally chopping off Chandler’s toe while trying to seduce him.

But one of the best moments happens when a turkey gets stuck on Joey’s head. When Monica puts the turkey on, Chandler tells her he loves her for the first time. Awww!

In this episode, Monica and Ross’ parents admit they don’t like Chandler because they think he encouraged Ross to smoke weed in college. This revelation leads to a bevy of accusations, like when Monica yells out, “Ross married Rachel in Vegas and got divorced – again!”

The clever storyline and eyebrow-raising revelations, interspersed with an inedible trifle, make this the best Thanksgiving-themed Friends episode ever.