For many women, 2017 felt like a reckoning. Revelations about systemic sexual misconduct in Hollywood, tech, education, and countless other industries were widespread. And it left us wondering, “What do we do next?”

In early 2018, one solution emerged. Three hundred Hollywood women — actresses, writers, directors, producers, and more — launched a global initiative. It’s called Time’s Up, and it has a simple goal: to fight sexual harassment in workplaces everywhere.

Time’s Up isn’t just a Hollywood initiative, but its members all share a common goal. The famous men and women lending their voices to the cause helped make it one of the most talked about trends at the Golden Globes. Here are the people who are helping to make Time’s Up a reality.

Actress Reese Witherspoon has been front and center in the Time’s Up rollout. She also played a crucial role in getting it off the ground. According to fellow backers Allison Janney and Laura Dern (her Big Little Lies co-star), Witherspoon helped connect women across Hollywood who all wanted to make a difference.

The actress was vocal on her social media accounts about Time’s Up’s launch. And she’s made it clear she won’t give up until they accomplish their goals. 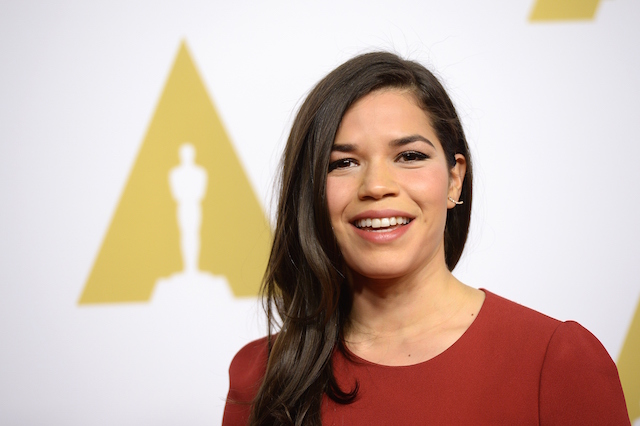 The Ugly Betty and Superstore actress has long been a vocal advocate for women’s rights. So it should come as no surprise to her fans that she’s at the forefront of the Time’s Up movement.

She, along with many other prominent Hollywood Latinas, like Penelope Cruz and Rosario Dawson, signed a Jan. 1 letter in support of Time’s Up that was published in the New York Times.

Ferrera also granted an interview, in which she explained why supporting Time’s Up is one of her biggest priorities. She told the Times, “not taking action is no longer an option.”

A vast majority of celebrities that attended the 75th Annual Golden Globes donned black as a show of solidarity for women who’ve been victims of sexual misconduct. Friends alum Jennifer Aniston was among them. But she isn’t just dressing the part of an activist.

Aniston joined many other women in donating a huge sum of money to Time’s Up’s legal defense fund. She, along with Witherspoon, Meryl Streep, and Grey’s Anatomy creator Shonda Rhimes, each donated $500,000. Taylor Swift and Oprah Winfrey each chipped in $100,000. And fellow Time’s Up supporters Natalie Portman, Emma Stone, Cate Blanchett, and Jessica Chastain each contributed $50,000.

The goal of the fund is to help women around the country seek legal aid when they’re mistreated in the workplace. And to date, they’ve already raised $15 million for the cause.

The cast of Stranger Things has always been supportive of the movement. | Kevin Winter/Getty Images

Life in Hawkins might get a little crazy for the Stranger Things crew. But at least we know that their priorities aren’t upside down. Case in point? Every cast member that attended the Golden Globes — kids and adults alike — wore all black to support the movement.

Many of the male cast members, like Noah Schnapp and David Harbour, wore Time’s Up lapel pins in solidarity. And Finn Wolfhard even tagged the initiative in his pre-show Instagram pics.

She plays a powerful Washington D.C. figure in Scandal. And she’s never been afraid of voicing her own political opinions. But with the Time’s Up movement, Kerry Washington has transitioned into a full-fledged activist — and she couldn’t be happier.

The actress has been with Time’s Up since it’s early stages. According to Washington, she and her co-founders were inspired to start the initiative after they received a letter of solidarity from 700,000 female farm workers.

2018 was going to be a huge year for Ava DuVernay no matter what. The Wrinkle in Time director is rapidly becoming one of the most sought-after artists in Hollywood. And she’s using her newfound fame to continue her legacy of activism as a Time’s Up advocate.

After announcing her support for the cause, DuVernay told InStyle Magazine, “it’s up to us to decide whether this is a moment or whether it’s something that really instigates systemic change.”

Oscar-winner Nicole Kidman has enjoyed a tremendous resurgence in her career, thanks to amazing performances in The Beguiled, Top of the Lake, and Big Little Lies. But it took the Time’s Up movement for the often private actress to take the plunge and join the rest of us plebes on the internet.

Kidman made her first Instagram post on Jan. 8, 2018 — and it was certainly worth the wait. The image features her holding the Golden Globe trophy she nabbed for BLL.

But the accompanying caption made it clear that the win wasn’t just about her. She told her fans, “I am so proud of my Big Little Lies family and to have stood with my sisters on such a special night. #TimesUp.”

When Emma Watson attended the Golden Globes, she — like so many others — was all about Time’s Up. But she didn’t just wear black. She brought a long-time women’s rights activist as her date.

Watson walked the red carpet with Marai Lasai, executive director of the black feminist organization, Imkaan. And she was more than happy to share the spotlight.

Women are clearly, and necessarily, at the center of the Time’s Up movement. But many prominent men in Hollywood have also rallied for the cause. Legendary director Steven Spielberg and Kate Capshaw donated $2 million to the initiative’s legal defense fund. And he was joined by J.J. Abrams and his wife, Katie McGrath, who gave $1 million.

Many other actors have donated to the fund as well – or have shown their support in other ways. Dozens, from winners Ewan McGregor and Alexander Skarsgard to nominee Daniel Kaluuya wore Time’s Up pins on the Golden Globes red carpet.

The Time’s Up initiative is an important step in the right direction. And it will never run out of room for allies in its mission. But some actors that have purported to support the cause earned backlash during the Golden Globes because of their own behavior.

Justin Timberlake wore a Time’s Up pin. But many pointed out that it was a hypocritical move, since he recently worked with Woody Allen. And The Disaster Artist winner James Franco also showed his support for the cause, and was then lambasted after several women made accusations about his own misconduct.

In the end, though, the Time’s Up movement has gotten off to a promising start. It won’t be able to cure the world’s sexual harassment issues overnight. But its advocates are willing to put in the hard work to make sure real change occurs — in Hollywood and beyond.