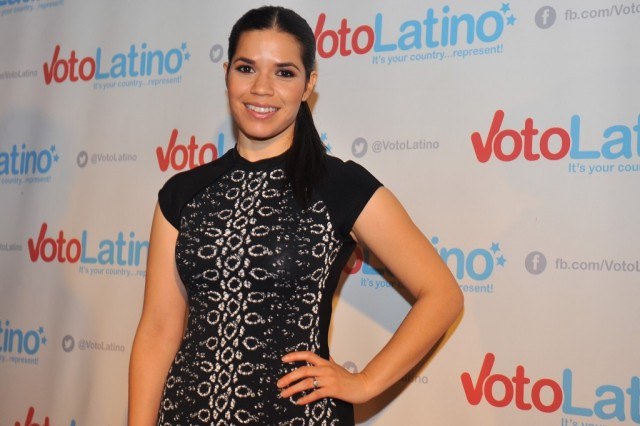 America Ferrera is about to make her television comeback. The former Ugly Betty star has signed on to play the female lead in NBC’s upcoming single-camera comedy pilot Superstore.

According to The Hollywood Reporter, Superstore centers on a disparate group of employees working at a big-box, Costco-like store in middle America. The comedy chronicles the love story that ultimately unfolds among them. Ferrera will star as Amy, who has been working as a floor supervisor at the store, Cloud 9, for 10 years. When she meets newbie Jonah (A to Z’s Ben Feldman), she’s initially put off by his superior attitude and the way that he clowns around on the job. Despite getting off to a rocky start, the two quickly form a bond, with Jonah helping Amy find more joy at work and Amy gradually but steadily developing romantic feelings for Jonah.

Colton Dunn (Key and Peele), Mark McKinney (The Kids in The Hall), and Nico Santos are reportedly set to co-star alongside Ferrera and Feldman in the pilot. Dunn will play Garrett, a sarcastic co-worker who frequently shares his wry comments over the store intercom. Meanwhile, McKinney will portray Glenn, the intensely religious store manager of Cloud 9, and Santos will play Mateo, a brown-noser from an impoverished background with 11 brothers and sisters. Lauren Ash (Super Fun Night) and Nichole Bloom (Project X) are also set to co-star.

In addition to starring in the potential series, Ferrera has signed on to serve as a producer. The Office’s writer and producer Justin Spitzer is on board to pen the script and will also act as a co-executive producer alongside David Bernad (Enlightened). Meanwhile, Ruben Fleischer (Gangster Squad, Zombieland) is set to direct the pilot.

Though Ferrera has reportedly received multiple offers over the past few pilot seasons, Superstore will mark the actress’s first time as a TV series regular since ABC’s Ugly Betty. The series, which ended its four-season run in 2010, earned the star both an Emmy and a Golden Globe.

Since then, Ferrera has appeared on the small screen in guest-starring roles, including a stint on CBS’s The Good Wife, and lent her voice to Cartoon Network’s DreamWorks Dragon, the animated TV spinoff of How to Train Your Dragon. The actress also made an appearance on this year’s Web series What’s Your Emergency, which was directed by fellow Ugly Betty star Michael Urie.

For the most part, though, the actress has been largely focusing on big-screen pictures in recent years. In addition to holding voice roles in the original How to Train Your Dragon and its sequel, Ferrera starred in several feature films, including Our Family Wedding, End of Watch, Cesar Chavez, and X/Y (the latter of which she also produced). Should Superstore eventually get picked up to series, the actress may be on the verge of making her welcome return to TV.

For NBC, Superstore is one of several comedies that it’s working on this pilot season. The network is also developing a small-screen adaptation of Problem Child, the workplace comedy Sharing, and an untitled Monica Potter project. Also in the pipeline are the multi-camera comedies People Are Talking and Take It From Us, and the single-camera pilots Cuckoo, How We Live, Sharing, and Strange Calls. The untitled Jerrod Carmichael project and the Eva Longoria-starring Telenovela have both already been given a straight-to-series order.