American Crime Story: The People v. OJ Simpson isn’t just one of the biggest hits of this year’s TV season. With its nuanced and detailed examination of one of the most infamous court cases of all time, and across-the-board phenomenal performances from its ensemble cast, it’s distinguished itself as one of the most fascinating series in years. It’s reinvigorated interest in not only the trial but the media spectacle surrounding it, and given us an intimate and often empathetic glimpse into the lives of those that were in the middle of it.

Much of the success in the series is its slow burn narrative. It’s given viewers time to get to know all the players — from the defendant himself, O.J. Simpson (Cuba Gooding Jr.), to the members of the long-suffering sequestered jury. And it’s all built to the final episode, “The Verdict,” which aired April 5 on FX. Even though there were no spoiler alerts necessary for the finale’s titular ruling, fans and critics still eagerly awaited the series’ last moments. And if that’s not the mark of an excellent series, it’s hard to say what is.

They’re also already looking to the future, and the prospect of a second season for American Crime Story. Like other American Crime, American Horror Story and True Detective — all anthology dramas that came before it — the FX hit will have to turn its attention to another notorious event. Instead of allowing speculation to build over what crime they would cover, the series’ executive producers Ryan Murphy, Nina Jacobson, and Brad Simpson announced earlier this year that they already have a plan in place.

According to The Hollywood Reporter, the second season of American Crime Story will focus on Hurricane Katrina, the 2005 storm that decimated the Gulf Coast. Given that the series’ first season was based on a singular murder case and its subsequent trial, a natural disaster is not the most obvious choice for a follow-up. But Murphy argues that, like the Simpson case, the devastating hurricane and the political and socioeconomic issues that were revealed in its aftermath created a cultural watershed moment worth exploring. Ryan Murphy told The Hollywood Reporter that in his eyes, Hurricane Katrina was “a crime against a lot of people who didn’t have a strong voice and we’re going to treat it as a crime.” 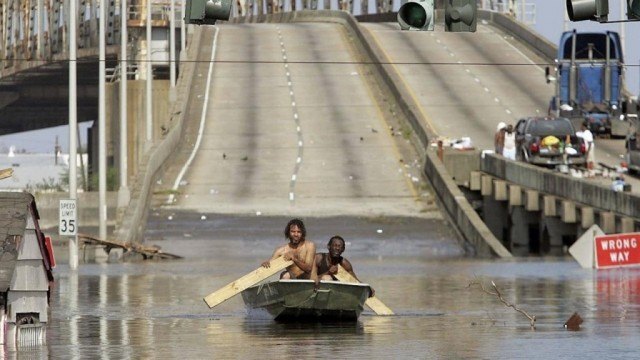 The details are sketchy regarding exactly how American Crime Story will handle the disaster. The series will likely follow roughly half a dozen people as they navigate the hurricane and its tragic aftermath. It’s likely to showcase many of the locations that became notorious during and after Hurricane Katrina — the Ernest R. Morial Convention Center and Superdome where thousands of stranded citizens went looking for shelter after the levees broke in New Orleans.

American Crime Story will also likely have to broach the challenge of representing modern day media and political figures in season two. The subsequent media coverage of Hurricane Katrina made celebrities out of everyone from CNN anchor Anderson Cooper, who surged in popularity after his diligent reporting to FEMA Director Michael D. Brown, who was criticized heavily for his agency’s lack of preparedness. It also made figures like President George W. Bush and rapper Kanye West notorious, due to their response to the disaster. It remains to be seen whether will American Crime Story weave archival footage of these public figures into its narrative, or attempt to cast actors to integrate them more directly into the story. And further, we don’t know yet whether ACS will follow in AHS‘s footsteps and recast its actors in new roles. Though it’s safe to say few would be disappointed to see Courtney B. Vance, Sarah Paulson, Sterling K. Brown or any of the first seasons’ ensemble in action again.

Ultimately, it’s too early to anticipate exactly how American Crime Story‘s Hurricane Katrina-themed second season will pan out. But with a layered, politically-charged story and plenty of material to draw from, it could be just as captivating the second time around.