‘American Gods’: What We Know About the New Starz Series

After years in development, the American Gods TV show is now fast approaching its premiere date. Starz has wrapped filming on its upcoming adaptation of Neil Gaiman’s 2001 Hugo and Nebula Award-winning novel. Here’s everything we know about the series so far, including the latest trailer (above).

1. It’s been in the works for quite some time 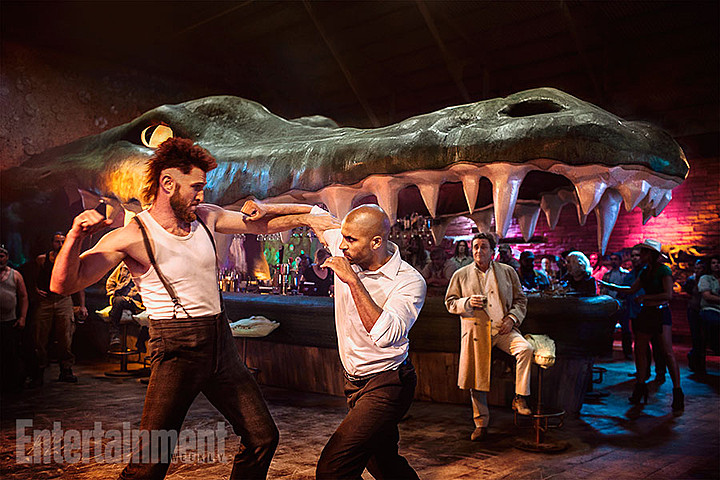 A small screen version of American Gods has been a long time coming. The project was originally set up at HBO in 2011, with Tom Hank’s production banner Playtone behind the adaptation. The show didn’t end up moving forward there, and Starz eventually took up the project last summer. The project was then put into development with the intention of garnering a straight-to-series order, but little was heard about it until last June, when the network officially greenlit the adaptation.

Entertainment Weekly has released the first official photos from the new series, seen above and on the following page.

2. It will blend fantasy and ancient and modern mythology 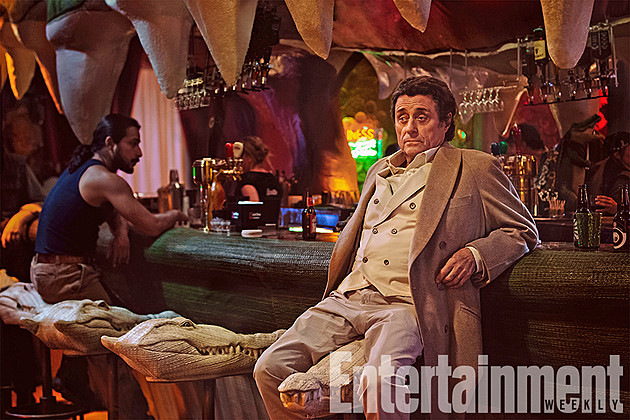 Like Gaiman’s original novel, the Starz adaptation will be a genre-blending tale of the war between old and new deities. It follows as the traditional gods of mythological roots from around the world begin to steadily lose believers to a pantheon of new gods who reflect modern society’s love of money, technology, media, celebrity and drugs.

Starz has dropped another first-look image from the upcoming adaptation, seen below: 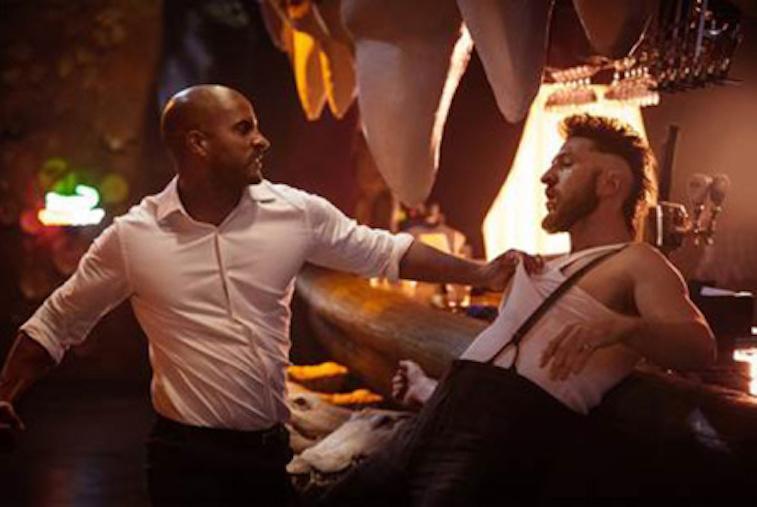 3. The cast is already filling up

Mr. Wednesday is recruiting for his war against the new gods. Believe everything when #AmericanGods premieres April 30 on @STARZ. pic.twitter.com/p5JTz8Urkv

The show is still working on rounding out its cast, but two lead roles have already been filled so far. After a lengthy casting process, Ricky Whittle (The 100) was tapped to play protagonist Shadow Moon back in January. Shadow Moon is an ex-con who becomes bodyguard and traveling partner to Mr. Wednesday.

Most recently, Ian McShane (Pillars of the Earth, The West Wing) boarded the project to play Mr. Wednesday. Described as powerful and charismatic Casanova-type, Mr. Wednesday is a con man and an incarnation of All-Father Odin, who’s traveling across the country recruiting his fellow forgotten deities to wage an epic battle against the new American gods.

Gaiman himself confirmed McShane’s casting, stating, “When you write a beloved character (beloved with, or despite, or because of all his faults) like Mr. Wednesday, you get to watch the Internet trying to cast the role. I’ve seen a hundred names suggested, but few make me grin like Ian McShane does.”

The network has just announced that Emily Browning has been tapped to play Laura Moon, wife to Shadow Moon. 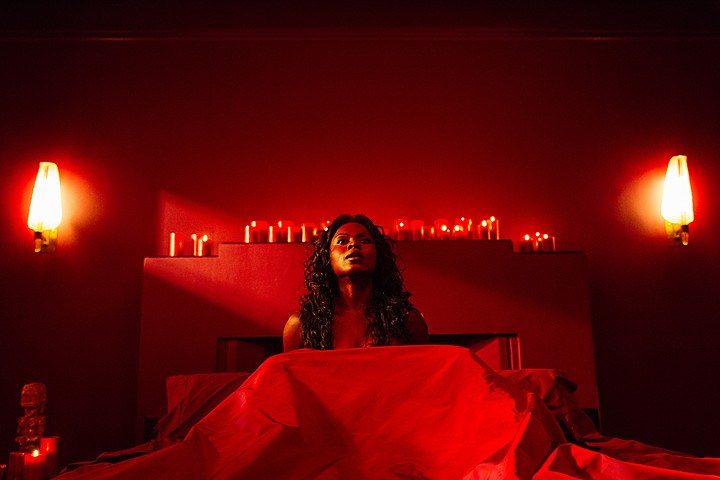 Update 3/22/16: Yetide Badaki has also joined the cast to plat Bilquis, “an ancient goddess of love who craves the worship she inspired in eras long gone.”  Update 7/19/16: The series released a first look at the character, seen above. 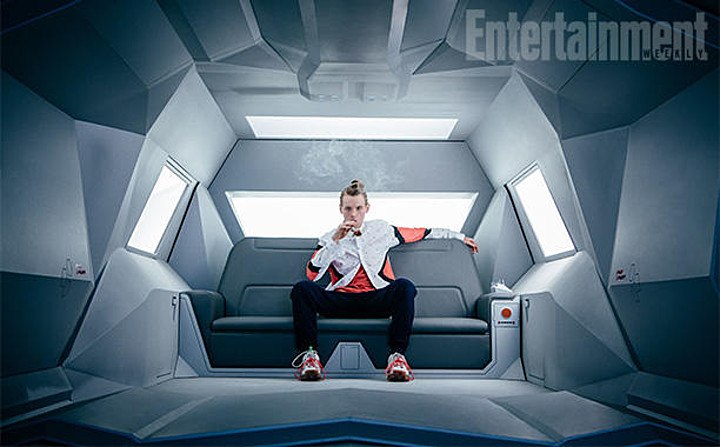 Meanwhile, Bruce Langley will play Technical Boy, “a New God who is purveyor of all things technology.” Desperate to prove himself, and hungry for respect and power, Technical Boy struggles to keep his impulsivity in check, making him dangerously unpredictable. Update 7/15/16: EW has released a first look image at Technical Boy, seen above.

Update 5/12/16: Pablo Schreiber (The Brink, Orange Is The New Black ) has been cast as the fan favorite character, Mad Sweeney, “a down on his luck leprechaun who is having a hard time understanding how he lost his charm and way. Always up for a good fight, Sweeney is never deprived while in the employment of Mr. Wednesday.” Schreiber takes over the role after British actor Sean Harris left the project due to personal reasons.

Gillian Anderson has joined the American Gods cast. Per THR, she will play Media, the mouthpiece for the New Gods, functioning as their public face and sales representative, by taking the form of various iconic celebrities. She lives off the attention and worship that people give to screens-to their laptops, their TVs, to their iPhones in their hands while they watch their TVs. Ever the perky spokesperson, and always in control, she spins stories in whatever direction best suits her. The first official look at Anderson as Media (appearing in the guise of Marilyn Monroe is seen above.
Per Deadline, Omid Abtahi (Argo) has been cast in American Gods. The actor will appear in a recurring role in Season 1, with an option to become a regular in Season 2. He will play Salim, a sweet, sad, and put-upon foreigner who is one half of a pair of star-crossed lovers.
Dane Cook has been tapped to play Shadow Moon’s best friend Robbie in Starz’s upcoming adaptation. According to Deadline, Cook’s Robbie promises to hold Shadow’s job for him while he’s in prison. Robbie is married to Audrey, best friend to Shadow’s wife Laura, and he provides another shoulder for Laura to cry on while Shadow is away.
Kristin Chenoweth has been cast as the goddess Easter.
Corbin Bernsen has been tapped for a potentially recurring role as Vulcan in the upcoming show.

4. Gaiman himself will be writing several episodes

News that the adaptation was moving forward was made all the more sweeter last June, when it was revealed that the author himself will be penning the script for several installments of the show. “We are cranking away” at scripts for the first two episodes, producer Bryan Fuller told Collider at the time, also adding, “Neil Gaiman is going to be writing episodes of the show.”

Gaiman joins a long list of authors, who have penned episodes of TV shows adapted from their own works, including George R.R. Martin for Game of Thrones and Stephen King for Under the Dome.

5. The rest of the creative team

In addition to writing several episodes, Gaiman will also serve as an executive producer on the series. Meanwhile, Fuller, who previously worked on NBC’s acclaimed Hannibal, and Michael Green (The River) will pen the rest of the scripts and also serve as showrunners.

David Slade (The Twilight Saga: Eclipse, Hannibal) will direct the pilot and other additional episodes. Fuller, Green, and Slade will also executive produce alongside Craig Cegielski and Stefanie Berk.

American Gods is set to premiere on Starz on April 30 at 9 p.m. ET.  The network revealed the official logo for the show, below: