‘American Horror Story’ Season 7: How Is ‘Cult’ About Politics?

For anthology series American Horror Story, the announcement of the theme for each season is a drawn-out process. Little hints are dropped in the lead-up to the premiere, and Season 7 is no different.

But when the title for Season 7 was finally revealed to be American Horror Story: Cult, many were confused. We had been previously led to believe that there was a political element to the story — and that may or may not be the case. Here’s everything we know about the upcoming season.

Creator Ryan Murphy is famous for his mysterious remarks leading up to each season. But on Watch What Happens Live in February 2017, he revealed a very big hint to host Andy Cohen.

“I don’t have a title, but the season we begin shooting in June is going to be about the election that we just went through,” Murphy said. Cohen was visibly surprised by the announcement, and when he asked Murphy if a character would portray Donald Trump, the showrunner replied, “Maybe.” Murphy clarified not long after the interview that the connections would be allegorical, Of course, news outlets took this information and ran with it. Other the next few months, theories sprung up across the internet.

While some imagined a nautical theme, others looked to past Murphy comments to draw conclusions. In May, Murphy shared an image on his Instagram account that evoked more speculation surrounding the election tie-in: A terrifying elephant, perhaps a nod to the mascot of the Republican party.

In April, Murphy gave a more definitive answer into the election tie-in comment. This clarified the connection, but didn’t tell us anything in regards to whether politics are a theme for the season.

Last month, we finally learned about the subtitle, “Cult.” At San Diego Comic-Con, guests were treated to a teaser video, which heavily featured clowns.

This certainly wasn’t what anyone expected to hear, and once again, media outlet speculation began. More small ties to the election were made, including the fact that the season will take place in swing state Michigan.

As Murphy can be cryptic, it’s nice to occasionally hear from others on the AHS team. Alexis Martin Woodall, an executive producer on the show, spoke at a TCA panel “The Women of American Horror Story,” and she addressed the election connection.

“It’s more about what’s going on in our world around us, the idea of paranoia,” she said. “It’s not what you think it is. Knowing less is so much more because it’s going to unfold for you. But it is an element in our launch point.”

Everything else we know A drawing of Evan Peters and Sarah Paulson as their American Horror Story: Cult characters | Ryan Murphy via Instagram

Aside from politics, we’ve learned quite a few other details about Cult recently. With weekly clues being released on a promotional site, here are the highlights.

Connection to other seasons 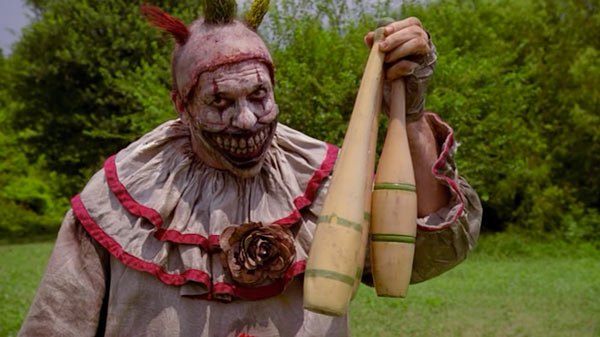 There’s one other big question left on everyone’s minds, but this one likely won’t be solved until the actual viewing. For the last few seasons, we’ve finally seen a few ways in which each connects to one another, and Season 7 is no different.

The most obvious similarity here is the focus on clowns, so Twisty from Freak Show is frequently mentioned in speculation. And with the season taking place in the modern day (or, at least partially), there could be a lot of callbacks to previous characters through their ancestors, as we’ve seen done before. But again, nothing is confirmed until we see it on screen.