Angelina Jolie Does Better As a Director the Second Time Around 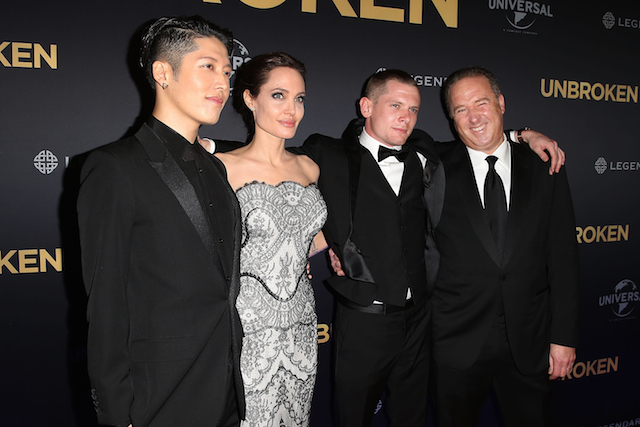 Angelina Jolie’s latest directorial effort, Unbroken, has been gaining Oscar buzz since the project was announced. The film premiered in Sydney over the weekend (it was shot entirely in Australia) and the biopic of Olympic athlete and World War II vet Louis Zamperini seems destined to pick up at least one golden statuette come Oscar time, showing a huge improvement from the first film Jolie directed two years ago.

Jolie’s first effort at directing was the love story set in the Bosnian War In the Land of Blood and Honey, which she also wrote. The movie was ambitious and drew on her extensive humanitarian work fighting the sexual violence that has accompanied the conflict in the Balkans. The conflict itself is incredibly complicated — way too complicated for enough people to show up and see a movie about it with actors from the region rather than Hollywood stars, even with her name behind it, so it was never destined to be a box office winner.

She chose to narrow the lens of the war by focusing on a pair of lovers who are supposed to be on opposite sides, a Serbian army officer and a Muslim painter. While critics praised Jolie for tackling the topic with knowledge and passion, they weren’t completely convinced, and the film only has a 55% rating on Rotten Tomatoes.

“I found In the Land of Blood and Honey to be moving and involving, but somehow reduced by its melodrama to a minor key. The scale of the ages-old evil and religious hatred in the region seemed to make the fates of these particular characters a matter of dramatic convenience,” said Roger Ebert in his review.

Jolie’s second time behind the camera shows a wiser woman, and the film’s subject manner is a bit easier for both audiences and critics to swallow. Louis Zamperini was an Italian-American immigrant and Olympic runner during the 1930s who went on to fight during WWII.

While fighting in the Pacific, Zamperini was aboard a plane that went down over the Pacific, an event he miraculously survived. He spent 47 days adrift on the ocean and when he finally reached shore was interned at a Japanese POW camp until the end of the war. After surviving all this, Zamperini went on to become a motivational speaker. He died earlier this year while the film was being made, at the age of 97.

Biopics of this nature tend to perform well at awards ceremonies, and according to Variety, the crowd at the premiere in Sydney was so enthralled that audience members audibly gasped at certain intense scenes and applauded loudly enough to drown out the Coldplay song playing over the end credits. Jolie walked the red carpet with husband Brad Pitt for the first time since the pair got married in a quiet ceremony earlier this fall.

The biggest things Unbroken has going for it are the inspirational biopic subject matter, a standout performance from newcomer Jack O’Connell, and a script from the Coen brothers adapted from the biography of Zamperini by Laura Hillenbrand. Jolie picked O’Connell to star after putting potential actors through some grueling auditions that included literal torture. The performance won O’Connell the New Hollywood Award at the Hollywood Film Awards last weekend, which was presented to him by Jolie. Those awards are not well known but are a big indicator of what’s to come come Oscar time.

“The auditions were very intense and none more so than the cell. In the cell, the actors would be confined, not knowing if he would be there for three minutes or an hour. A crew member with a rubber baton would go in at unexpected times and hit the actor. It didn’t hurt, but the feeling would bring up the emotion of the loss of freedom, the control, the never knowing, the sense of powerlessness. All of the actors were so brave and many of the auditions were emotional and heartbreaking, and then came Jack,” Jolie said of O’Connell at the ceremony, per The Age. She went on to say that Zamperini helped her choose O’Connell from among the many auditions.

“I knew I was drawn to this story, but I didn’t realize how much I needed it and how much it would change my life. Louis made me think differently about life and how to survive things, but as a director, it was really difficult, an extraordinary challenge,” Jolie told The Hollywood Reporter. It looks like that big challenge and the big accomplishment that resulted from it could pay off in Oscar gold for the film. Unbroken opens on Christmas Day.