Are Evangeline Lilly, Michael Douglas and Michelle Pfeiffer in ‘Avengers 4’? 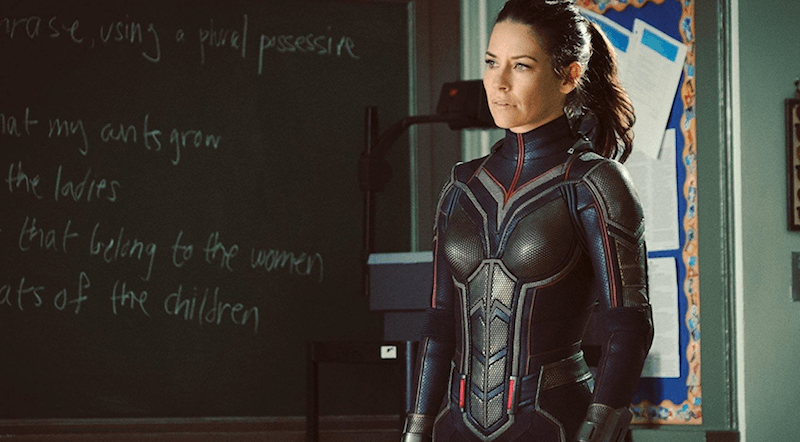 *Warning: This article will contain major spoilers for Ant-Man and the Wasp*

Although the vast majority of Ant-Man and the Wasp takes place in a peaceful bubble prior to Avengers: Infinity War‘s devastating ending, the post-credits scene bursts that bubble, and it has major implications for Avengers 4. In it, Hank Pym, Hope van Dyne, and Janet van Dyne all vanish out of existence thanks to the snap heard around the world. So does that mean these characters won’t be in the next Avengers movie at all?

Well, not exactly. We know that Evangeline Lilly definitely will be in it, as she confirmed as much back in February. Lilly said at the time, “I will appear in Avengers 4. Not very much, so don’t get your hopes up. Not going to be a ton. But I’m in there! And I’m proud to be in there, and I’m stoked to be in there.”

This “not very much” quote got fans worried at the time, as most had assumed The Wasp would finally fight alongside the Avengers in the movie. Now, we know that’s not the case; at least, she definitely won’t join them from the start of the film.

Interestingly, Lilly also seemed to confirm in an interview that The Wasp has scenes with Captain Marvel. She told E! that she “got to know Brie Larson pretty well” while working on the movie. So although she has a tiny role, her scenes obviously aren’t just flashbacks.

What about Michael Douglas and Michelle Pfeiffer? Are they in Avengers 4? Although Hank and Janet both disappeared in Thanos’ snap, we know that both of these actors are going to be in the movie, too.

We know that thanks to Sebastian Stan, who seemed to give away some big spoilers by accident in an interview back in April. Stan said that he filmed a scene that had “everybody” in it, including the actors who play Hank and Janet.

“There was one scene, I think, we had where everybody was there,” he explained. “I can’t really talk about that scene, but I knew it took them three months in planning this scene to have everyone there. You look around and you just saw everyone from Samuel L. Jackson to Michael Douglas to Michelle Pfeiffer. Everybody was there.”

Some of the other Marvel actors have spoken about a big scene with the entire cast in it. For instance, Chris Pratt and Zoe Saldana once teased a “big, massive scene,” saying that “everybody was there” for it. This apparently includes Gamora, who died a normal, pre-snap death in Infinity War.

It seems likely that this big scene takes place at the very end of the movie after the Avengers have successfully reversed Thanos’ actions and saved all of the fallen heroes. That’s probably why Lilly said she’s not in the movie very much; maybe what she meant was that she’s technically in there since she returns to life at the very end, but she’s not exactly part of the main action, nor are Michael Douglas and Michelle Pfeiffer.

Nobody really knows what that big scene is, but fans speculate that it’s either Tony Stark’s wedding or perhaps a funeral for Steve Rogers. Either way, it would be an event that brings all of the characters together and serves as the conclusion of the first 11 years of Marvel Studios movies.

Of course, Scott Lang will also be in Avengers 4, but unlike Hank, Hope, and Janet, he’s apparently going to be a part of the main cast. When Ant-Man wasn’t in Infinity War, the Russo Brothers promised that they had an interesting storyline planned for both him and Hawkeye in Avengers 4.

The post-credits scene of Ant-Man and the Wasp appears to set that storyline into motion, with Scott being left stranded in the Quantum Realm. Right before he went in, Janet warned him to avoid time vortexes, so perhaps Scott will intentionally enter one of those vortexes in order to make it back into the real world, and this can set up a time-travel storyline. You can read more about how we think Ant-Man and the Wasp will lead into Avengers 4 here.