On March 22, 2017, there was an explosion that killed 22 people and injured 59 others at an Ariana Grande concert in Manchester, U.K. According to CNN, ISIS has claimed responsibility for the Manchester bombing and said on its Telegram channel that “soldier of the caliphate” is the one who “plant explosive devices.”

Greater Manchester Police Chief Constable Ian Hopkins claimed the suspected suicide bomber was 22-year-old Salman Abedi, according to The Washington Post. He was a British citizen and his brother has been taken into custody.

Since the attack, there have been many people coming forward to give statements. One of them was Prime Minister Theresa May who condemned the attack with the following statement:

All acts of terrorism are cowardly attacks on innocent people, but this attack stands out for its appalling, sickening cowardice, deliberately targeting innocent, defenceless children and young people who should have been enjoying one of the most memorable nights of their lives.

There have also been multiple celebrities who came forward with their thoughts and prayers for the victims of this terrorist attack. Here are 15 celebrity reactions to the Manchester bombing.

The pop star will understandably need some time to really be able to talk about her experience that night, but she did give a quick tweet in regard to the tragic events. Sadly, she apologized for the night’s events and for what her fans are going through.

There have been many celebrities and fans who tweeted their condolences and support for Ariana Grande as well.

The singer has been pretty private lately and hasn’t been very active on social media, but she was quick to give a message of support on Twitter.

The English singer gave a brief message to those in Manchester. She also followed up with a few more tweets, such as, “While I am still reeling after last night’s atrocity, I keep hearing of extraordinary acts of kindness and bravery in Manchester. #LoveWins” and “Touched especially by all those queuing up to give blood. Manchester has truly shown what a strong and compassionate place it is. #LoveWins.”

The “No Promises” singer also sent prayers out to those affected by the Manchester bombing on Twitter. In addition to the message above, she tweeted, “Tearing up imagining innocent concert goers losing their lives.. praying for everyone and all #arianators.” 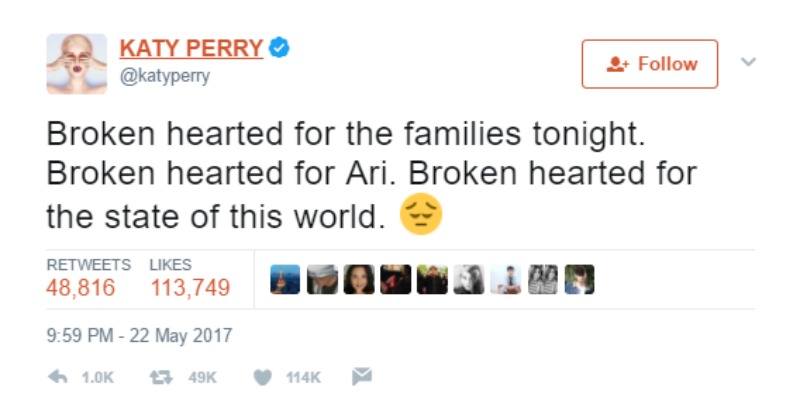 The pop star first tweeted, “Praying for everyone at @ArianaGrande’s show” then followed it up with another tweet. She also described her reaction on the matter as “broken hearted.”

The action star has been busy promoting his new movie, but he took a break to tweet a message to Grande and the families affected by the attack.

The One Direction alum also gave a quick reaction on Twitter. He said he was heartbroken but sent his love to those impacted by the attack. 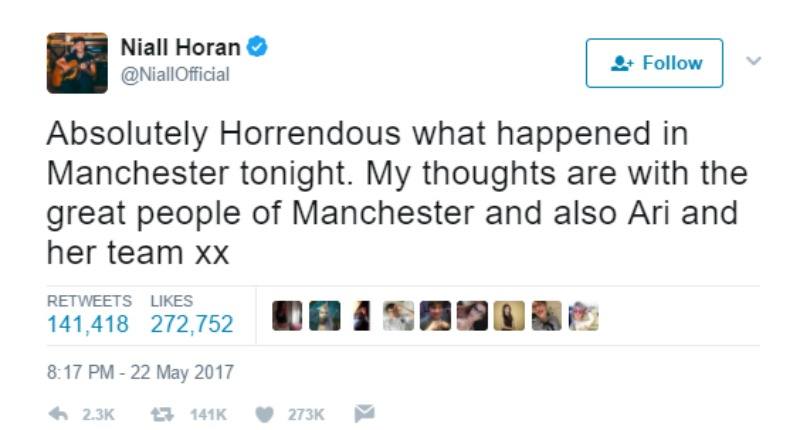 The singer called the attack “absolutely horrendous.” He also followed up by tweeting, “Can’t fathom last nights attack. Innocent young fans and families going to watch their favourite artist in concert and this happens.”

The singer tweeted a lot after the terrorist attack occured. He retweeted messages of people looking for missing concert goers and posted updates from the news.

One of his most moving tweets on the matter was, “News of Manchester was painful enough but seeing pictures of these beautiful, innocent kids and knowing there is more to come. Devastating.” 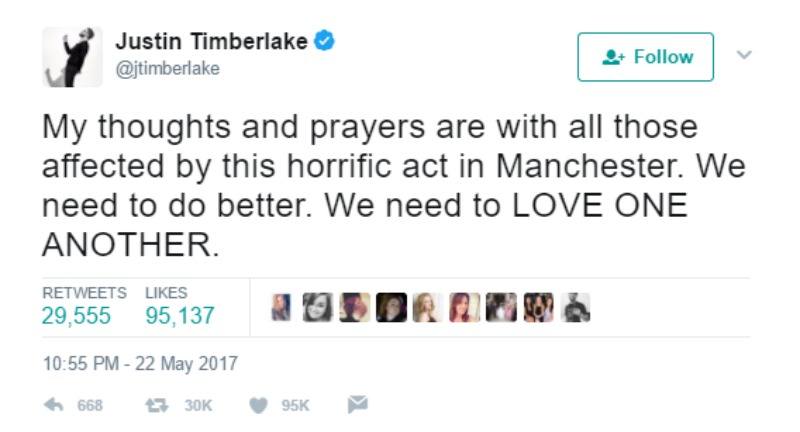 The singer also sent his thoughts and prayers to those affected by the events. He called the attack a “horrific act” and asked for more love in the world.

The former One Direction member called the events “so upsetting” in his tweet about the disturbing event. He also sent his love to the victim’s families. The pop star posted a cute picture of her with Grande and a touching caption. Miley Cyrus is another celebrity who offered her support to the singer as well as her fans. 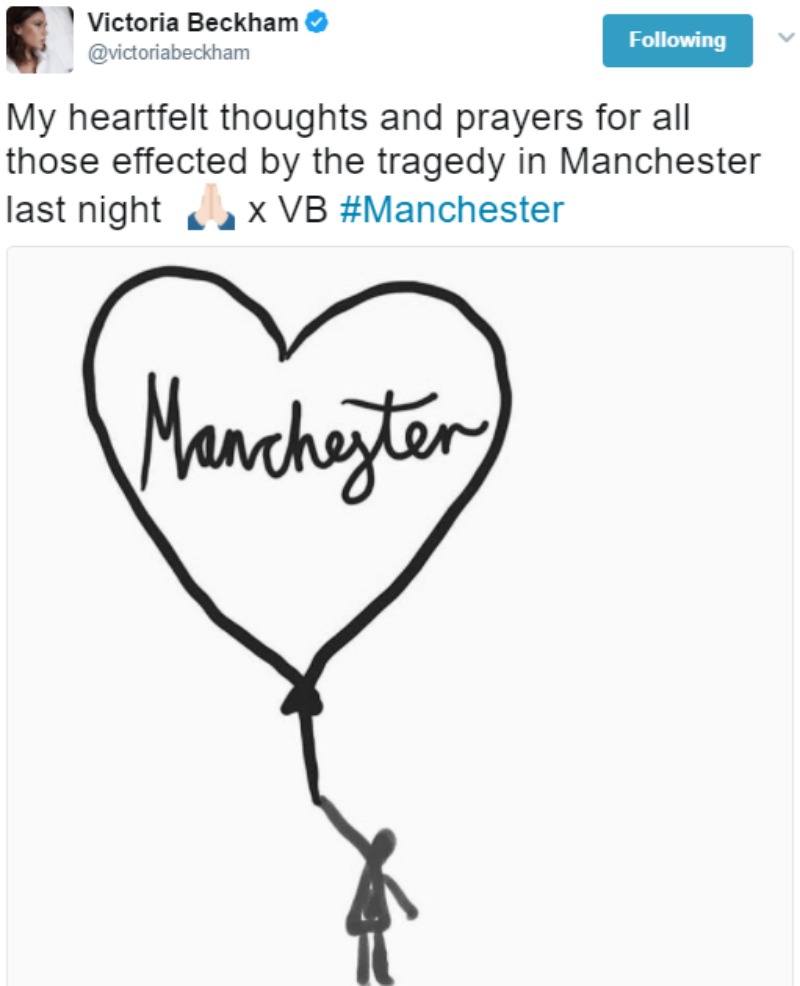 The British fashion designer tweeted a touching picture along with a post sending her thoughts and prayers to the victims.

The Game of Thrones star also sent her love to the victims of the terrorist attack in a tweet. 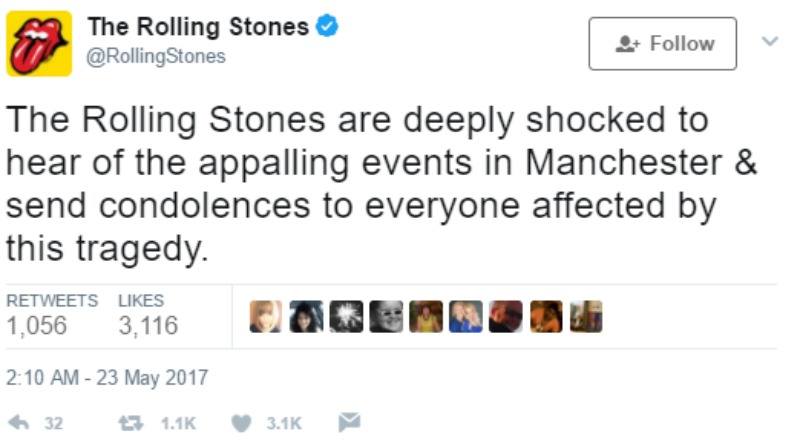 The iconic band gave a joint statement on Twitter giving their condolences. They described their reaction to the events as “deeply shocked.”