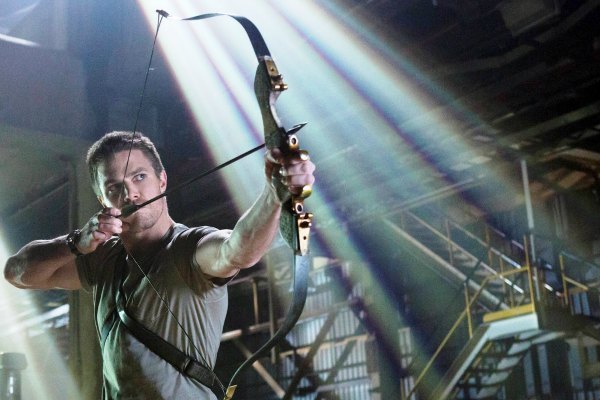 Another Batman villain will soon dominate the world of Arrow, the hit CW show based on the DC Comics crime-fighter Green Arrow. The notorious Ra’s al Ghul will finally appear in season three after being hinted at in previous seasons. News of his presence was confirmed at San Diego Comic Con. Ra’s will soon be the main foe, but he isn’t the first and only Batman villain to appear in the series; several reincarnations to varying degrees of comic book similarity have been depicted on the show since its premiere in 2012.

The writers and producers of Arrow have long been inspired by Batman, especially Christopher Nolan’s Dark Knight films, which weren’t afraid to explore darker territory on screen. The line: “You should be mindful of your surroundings,” is repeated in Batman Begins and is also spoken in a season two episode of Arrow titled “League of Assassins.” Ra’s leads the League of Assassins, a secret organization that also includes his daughters, one of which is named Nyssa al Ghul in Arrow, but named Nyssa Raatko in the comics. His other daughter, Talia, has a higher profile in the comics after being married to Bruce Wayne and giving birth to his son.

Thus far in Arrow, members of the organization have also included Sara Lance (The Canary) who was released and rejoined, Malcolm Merlyn, and Al-Owal. In the comics, there have been countless members in the League of Assassins, so it’ll be interesting to see which other characters the creators choose to depict.

Some of the Batman villains in Arrow have had less backstory in the show. Barton Mathis (The Dollmaker), appears twice in season two. He gets taken down by Police Captain Quentin Lance, while in the Batman comics, a young cop James Gordon shoots down Mathis’ father. We know from the comics that as a child Mathis went with his father on “hunting” trips in which his father killed and then cannibalized people. The Dollmaker’s mask is made of skin from his deceased father.

While much of the Arrow storylines follow the DC Comic universe, there are some villains with notable changes. Garfield Lynns (Firefly), worked as a movie pyrotechnic and petty street criminal in the Batman comics. In Arrow, he is a vengeful firefighter after he was presumed to be dead on duty. He appears in a season one episode in which he is obsessed with murdering his old firefighting team.

Similarly, Helena Bertinelli (Huntress), receives an altered storyline. In the comics, the mafia kills her family and she becomes the huntress to avenge their death — a hero rather than the murderer portrayed in Arrow as she attempts to kill her father and anyone close to him.

Anticipation is high for season three, with the debut of Roy Harper (Arsenal), and Ra’s imminent presence is the biggest Batman figure in the show so far. With the array of characters available to draw from in the DC universe, he probably won’t be the last one. The new season premieres October 8.