‘Ash vs Evil Dead’: Everything We Know So Far

Every now and then, Hollywood taps into the collective unconscious of nerds everywhere and comes up with something so unbelievably exciting that one can hardly believe it’s real — Ash vs Evil Dead is exactly that. Last year, the Starz network announced their plans to revisit the much beloved Evil Dead franchise with a ten-episode limited series; ever since then, fanboys everywhere have been pooping their pants with joy.

Details of the show have unfolded over the past few months, and each Comic-Con announcement and making-of featurette has made the series look only more and more badass. It’s not a reboot? Awesome. Bruce Campbell is returning as Ash!? Amazing! Campbell and Sam Raimi wrote the show together!?! IT ALSO STARS LUCY LAWLESS?!?! I don’t even have asthma, but I need a freaking inhaler!

Ash vs Evil Dead premieres on October 31 (perfect). Here’s everything we know so far about what is promising to be an unbelievably kickass series. 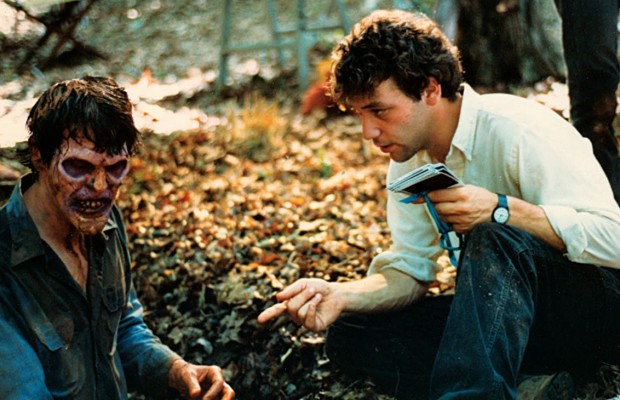 Let’s face it: Evil Dead is nothing if Sam Raimi’s not involved. Known better today as the critically acclaimed director behind the first batch of Spiderman movies and Drag Me To Hell, Raimi made a name for himself in 1981 with the first Evil Dead, and it’s his mastery of the line between camp and horror that have made the movie one of the most significant cult classics ever. Bruce Campbell is great, but both he and the franchise are nothing without Raimi (and, to be fair, vice versa). A batch of other directors will helm the rest of the episodes, but Raimi will have the chance to immediately set the tone for the show, and that is a very good thing.

2. The Deadites are back and more clever than ever.

One of things that makes the show so exciting is that it’s returning to the mythology of the original trilogy. Unlike many horror-movies-turned-TV-shows these days, AvED isn’t trying to ignore or replace the world of the source material (I’m looking at you, Scream). It’s clear within the first thirty seconds of the trailer that both the Deadites and the “Necronomicon” — both of which are cornerstones of the original movies — will be heavily featured. Even better, it looks like the Deadites haven’t lost their sense of humor.  As Bruce Campbell puts it, the Deadites’ personalities are a part of what make them such fun foes, unlike fellow zombie series The Walking Dead. “We are competitive with ‘The Walking Dead,’ like, ‘We’ll show those fu****s!’” Campbell said. “[Our] Deadites are very clever. They’re not stupid shufflers. They can mimic people; they can drive cars. They’re a fun threat.”

Starz is a premium cable network, after all. American Horror Story (which airs on FX) and The Walking Dead  (AMC) both get away with an awful lot of violence; AvED will air on a network with even fewer restrictions, and by all accounts the gore is supposed to be through the roof. Of course, because it’s Sam Raimi, the gore will likely be just as funny and goofy as it is horrifically twisted (or, as Lucy Lawless described it to the LA Times,  audiences can expect “buckets of blood and good humor“). 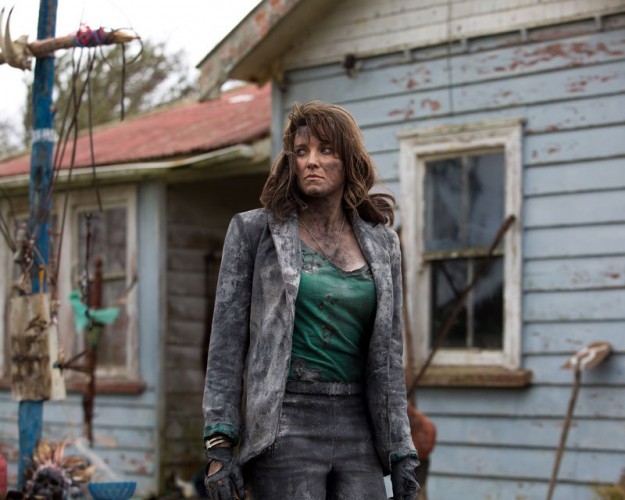 First of all, who doesn’t love Lucy Lawless? From her ass kicking days on Xena to her tenure as a ruthless cylon on Battlestar Galactica, Lawless has been a fanboy favorite for years. Not to mention — lest anyone should ever forget — she was the one woman who could tame the wild and vulnerable heart of the great Ron Swanson. So far, all Starz would tell us about her character Ruby is that she’s “a mysterious figure who believes Ash is the cause of the Evil outbreaks.” Fortunately for us, Den of Geek sent one of their editors to this years San Diego Comic Con, who gleamed that Ruby’s last name is Knowby: as in, Professor Knowby, the character from the original movies who was the first idiot to read from the Necronomicon.  I suspect a hidden backstory behind Ruby’s vendetta.

5. We know the titles and plot synopses of the first nine episodes.

Yes, we know them, but that’s far too many spoilers for us to flagrantly post here for everyone to see. Who am I to go forcing spoilers on unwilling participants? (Plus, that would mean that I have to look through them, and I’m hoping to be just as surprised as anyone else when I watch it the first time). If you want to ruin the show for yourself, you can see the episode titles and plot synopses here. I will only say the the first episode is called “El Jefe” and that the synopsis confirms what we all suspected, which is that dumb old Ash is the one that bring the Deadites back from… well… the dead.

6. There will probably be time travel 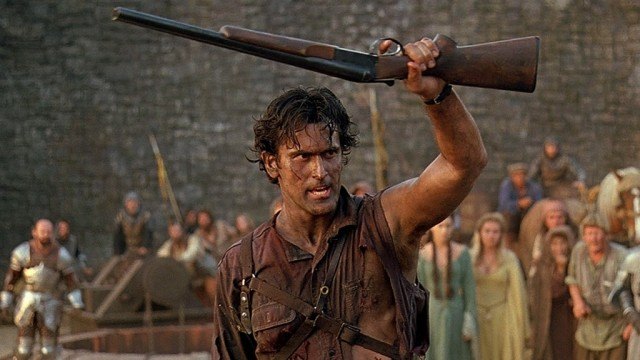 Though the first two Evil Dead movies were set almost entirely within the confines of a haunted cabin, any casual fan of the franchise can tell you that all that changed for the third movie. At the end of Evil Dead 2, Ash found himself transported to medieval England, thanks to the mystical powers of the Necronomicon. Though the TV series is clearly set in the modern world, the fact that it’s wholly embracing the movies as canon means that time travel could feasibly be a part of the plot. When Entertainment Weekly asked Bruce Campbell about the potential, he wouldn’t confirm in either direction, but the implication was that, yes, we will probably see Ash travel through time at some point in the show. “I would just say just don’t be surprised if it does happen because it has happened,” said Campbell. “So I would say that would be on the table as well.”