‘Ash vs. Evil Dead’: How It Compares to the Horror Movies

I maintain that the Evil Dead movie trilogy, composed of Evil Dead, Evil Dead 2, and Army of Darkness, holds up as one of the greatest movie trilogies of all-time, in part because each film is so unique in tone. The first is a low-budget gore fest so relentless it becomes hilarious. The second kicks the surrealism and slapstick up a notch to create a live-action Looney Tunes movie that still manages to be scary. The third, of course, gets even sillier by supplanting Bruce Campbell’s big-talking Ash into medieval times.

When I heard the news of Sam Raimi’s reboot series, Ash vs. Evil Dead, which premiered last Saturday on Starz, I wondered which film this new incarnation of Necronomicon Ex-Mortis would most resemble. Or would Raimi be unable to capture the frenetic, insane energy that made his original films so beloved?

The answer to the latter question is a resounding no, but I’m still mulling over the former. The pilot episode of Ash vs. Evil Dead is, by most accounts, a success that proves Raimi and Campbell alike have still got it. The series picks up with Campbell’s Ash 30 years later, living in a trailer and working a grunt job at a local department store (not S-Mart, though), spending his free time lying about the origins of his severed hand to seduce grimy bar babes.

Raimi’s prowess and endless creativity behind the camera is immediately on display, as Ash’s reintroduction scene involving a girdle visually recalls the sequence where he first outfits himself with the chainsaw hand.

Campbell has plenty of fun playing Ash as the same swaggering loser he was in Army of Darkness, his enormous ego all the more laughable for the middle-aged wear and tear showing in his wrinkles and his protruding gut. In the tradition of the films, little time is wasted before getting to the Deadite action. One of those bar babes briefly transforms into a gleeful demon, mid-coitus, to warn Ash of their impending return.

One of the episode’s best scenes comes early, as a policewoman wanders into an eerily silent home, only to have her partner transformed to a demon within record time. The sequence involves a mounted moose head, a swaying light bulb, an Exorcist-style demonic head turn, and plenty of immersive camera movements.

Of course, it doesn’t take long before the most famous shot of the trilogy turns up, with a little added energy — I speak, of course, of the rushing point-of-view shot from the perspective of an unseen monster. The familiar, thrilling shot is incorporated naturally, and the show only occasionally feels derivative of the films that came before, as in a fight scene between Ash and a possessed doll that almost exactly mirrors the fights with his own hand in Evil Dead 2.

The series’ only other significant weakness is with its plotting. The explanation for how the Deadites were resurrected feels particularly lazy, characterized by a decision that feels too stupid, even for Ash. Other awkward moments abound during the scenes Ash shares with his new co-stars Amanda (Jill Marie Jones) and Pablo (Ray Santiago), both coworkers who wind up tagging along with Ash once the Deadites show up in full-force.

Ash’s come-ons toward Amanda are best played for laughs, but I worry they might be hinting at some actual attraction between the two. An actual romance would feel out of place, both because of the genre and the actors’ age gap. Pablo, meanwhile, doesn’t get much to do but build Ash up as a Mexican folk legend, dubbed “El Jefe.”

The first two films were thrilling for their containment, limiting the action to one seemingly endless night in a dingy cabin, completely controlled by the unleashed evil forces. It would make little sense to confine an entire series to one time frame or location, but Ash vs. Evil Dead compensates for that lost tension by expanding the domain of the evil dead to encompass the entire town.

This premise should allow for plenty more of the untethered, cartoonish antics that make these demons such enjoyably terrifying villains — there are no rules, and in a final fight scene set in Ash’s trailer, Raimi again shows how thrillingly he can create striking images and tension all at once, while still fitting in time for a bit of unabashed fan service in the form of Ash’s chainsaw appendage. 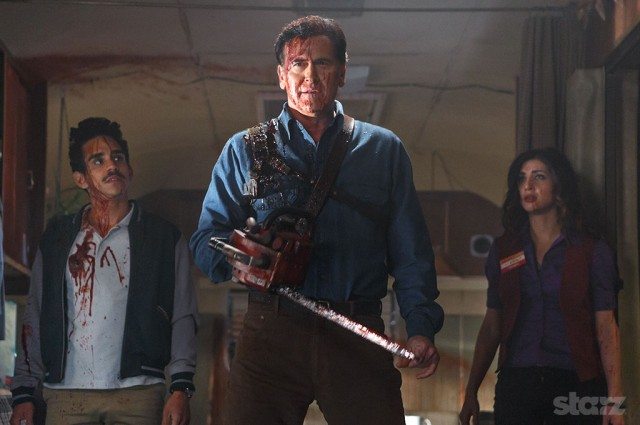 Despite the few gripes I have, the pilot for Ash vs. Evil Dead, ultimately, is far better than any pilot has a right to be, at least partially because the groundwork was laid long ago with the films and because Raimi isn’t afraid to jump into the deep end rather than waste time wading in slowly. The series, so far, most closely resembles the perfect balance of Evil Dead 2, which is high praise as far as I’m concerned.

However, I anticipate that Ash vs. Evil Dead will soon develop a tone and a rhythm all its own in subsequent episodes, almost out of necessity. Television doesn’t allow for the relentless insanity or the immediate gratification the films have in spades, but it rewards viewers in different ways, over longer spans of time. In order to transform his defining film trilogy (take that, Spider-Man!) to a successful, even great series, Raimi will have to find ways to deepen his characters and their relationships in meaningful ways in between all the Deadite mayhem. I’m optimistic.