‘Assassin’s Creed Syndicate’: You Wanted Better, You Got it 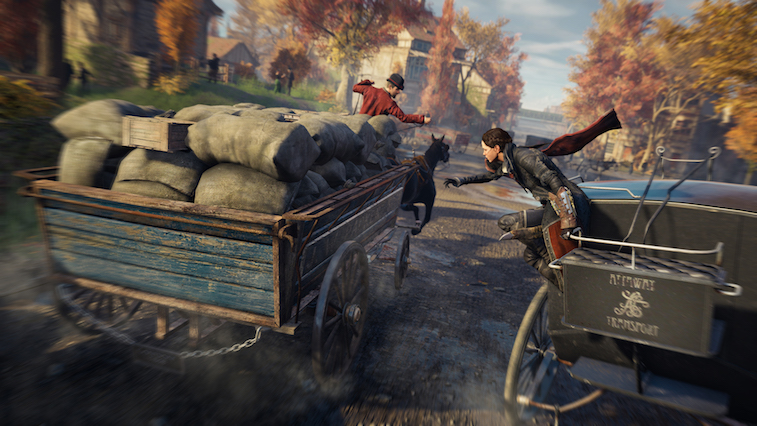 I have a feeling there are a lot of lapsed Assassin’s Creed players out there. Hell, I’m one of them. I loved Assassin’s Creed II so much I played it until my thumbs hurt. Then the third one was such a letdown I gave up after six hours of boredom. I’ve dabbled with the series here and there in recent years, but none of the games have pulled me in, until now.

Assassin’s Creed Syndicate is an excellent game that fixes many of the series’ ongoing issues. And with its mostly stand-alone story, it offers a great entry point for people who haven’t tuned in for a while.

This time, the historical setting is 1868 London, when the modern world was just kicking into gear. Darwin was figuring out evolution. Bell was inventing the telephone. Dickens was pumping out novels and (who knew?) investigating the paranormal. The Industrial Revolution was like a tidal wave, transforming everyone’s daily life — and not always for the better.

The player takes control of twin assassins, Jacob and Evie Frye, who make their way to London to make their mark on the world. Evie specializes in stealth, and is after a mystical artifact. Jacob digs brawling, and is more interested in assembling a street gang that will help him wrest control of the city from the vile Templars.

The dialog is witty, the acting is top-notch, and the story zips along, thanks to a fine cast of characters. If you slept through some of the story parts of previous Assassin’s Creed games, I think you’ll be pleasantly surprised here. My only complaint is that some of the industrialist villains feel like cartoon characters, counting mountains of money while children toil away under dangerous conditions in their factories. But hey, there’s a reason we have child labor laws now.

Really it’s the basic gameplay that needed work in previous installments, and it’s nice to see it get the attention it deserves. Climbing buildings is smoother, thanks to extra grooves and handholds in the mostly brick exteriors, and a new rope launcher tool gives you a Batman-like ability to travel long distances without constantly having to scale buildings. Although it still isn’t as smooth as Batman: Arkham Knight or even last year’s Middle-earth: Shadow of Mordor, navigation feels better here. At least it’s clear Ubisoft knows what needs improvement and is working on it.

If you prefer traveling at ground level, you can now hop in a carriage to get from point A to point B. It’s like a Victorian version of Grand Theft Auto, and it’s a lot of fun to sweep your cart around corners and bash into rival gang members.

To top it off, this is one of the most interesting settings yet in an Assassin’s Creed game, and the historical information is fantastic. New encyclopedia entries unlock as you progress through the game, so you can learn about the history, characters, and landmarks if you take the time to read them. It kind of felt like I was on vacation in the setting, reading an entertaining tourist guidebook.

And as always with the series, it really feels like a historical era is coming alive. The environments are drop-dead gorgeous, with all of London’s period landmarks sitting right where they should be.

Assassin’s Creed Syndicate doesn’t quite correct all of the series’ mistakes. But it freshens things up in many important ways, and tells a ripping yarn while it’s at it. If you haven’t given an Assassin’s Creed game a chance in a while, this is the one to play.