We’ve seen upward of eight TV spots and two full-length trailers for Batman v Superman: Dawn of Justice. Throughout all that footage though, we’ve seen precious little of the promised showdown between DC’s two most iconic heroes. Sure, we see bits and pieces of punches being thrown, as well as some some verbal sparring between Clark Kent and Bruce Wayne sans costumes. But it seems as though a movie that’s spoiled the rest of its major plot points is holding out on showing us at least one key element, and that’s the fight between our titular heroes.

Leaving nothing to chance, Warner Bros. went ahead and released a 45-second clip of the Dark Knight and Man of Steel going toe-to-toe. In it, we see Superman toss Batman straight through the Bat Signal, advising him to stay down in the face of an opponent who could easily end his life. Batman proceeds to throw a smoke grenade, reappearing behind Supe armed with some sort of gun. Superman grabs the bullet with his hand, and the clip ends there, leaving us in suspense as to how the rest of the fight transpires.

The clip may come in under a minute in total runtime, but it’s still inspiring a flurry of conversations about Batman’s tactics, most significantly the use of a gun. The Dark Knight has a long history of making a concerted effort to avoid using firearms of any kind. Part of that surrounds his “one rule” that says he can’t kill anyone, and a gun is the best way to accidentally do just that. The other facet of eschewing guns is rooted in his focus on hand-to-hand combat, and the use of his intellect over sheer force. 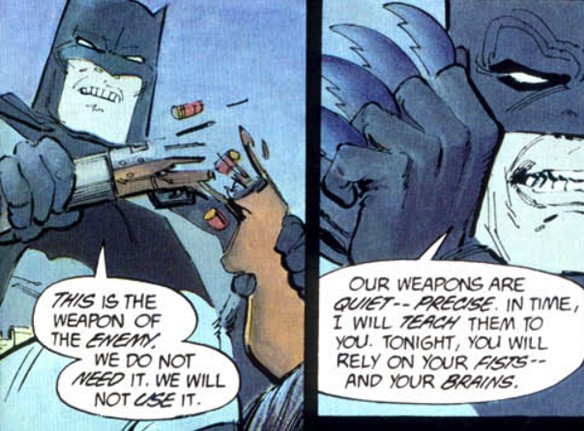 Batman’s always been clear about his stance on guns | Source: DC Comics

In a showdown with a nigh indestructible alien with damn near limitless strength, it looks as though Batman has made an exception. That exception is a symptom of a larger problem presented in this particular battle royale. It’s a fight that’s not even a little bit even no matter how you flesh it out. A straight fight between the two heroes is always going to go the way of the guy who’s invulnerable to just about everything you throw at him. If Batman discovers and utilizes Kryptonite, then the showdown swings in the other direction.

Zack Snyder likely knows that core issue, which is why Batman v Superman is jam-packed with other villains. As of now, we know we’re getting Lex Luthor and Doomsday, and rumors have been flying around that Darkseid (think the DC equivalent of Thanos) may also make an appearance. Combine the addition of Wonder Woman and an alleged appearance from Aquaman with the hefty two-and-a-half hour runtime, and we’re looking at a crowded movie from DC. The studio has a long way to go to catch up with the MCU; the simple solution to that is to pack as much into this one movie as humanly possible.

We’ll have to wait until March 25 to see how the rest of Batman v Superman plays out. We can already see a new kind of Batman in the latest clip, as well as a decidedly murder-y Superman (who incidentally already killed a major villain with his bare hands in Man of Steel). DC/Warner is making a concerted effort to be the “dark and gritty” alternative to Marvel’s lighthearted, sometimes comedic approach, and all indications point to that beginning with Dawn of Justice.