There’s a stark difference between the way British and American TV works. Here in the States, your run-of-the-mill network show will contain somewhere around 20 episodes per season, aired on a yearly schedule. For others like Game of Thrones, it’s closer to 10 installments over a 2-3 month period. Britain handles its television a little differently though, choosing to err on the side of shorter seasons on a less-than-regular schedule. BBC’s Sherlock is a prime example of this, going with three 90-minute episodes per season, aired just about every two years.

Part of this tradition includes the airing of a standalone holiday episode that exists outside of the normal storyline of each season. This year, Sherlock will be doing just that, with a twist: The Christmas special will be set in Victorian London. To clarify, it’ll feature the same Sherlock Holmes and John Watson, only with a decidedly more traditional feel. It’ll of course exist outside of the normal canon of the regular series, sans the existence of time travel (sorry, that’s the other Steven Moffat show), and now we have our first look at what we can expect in the form of a trailer. 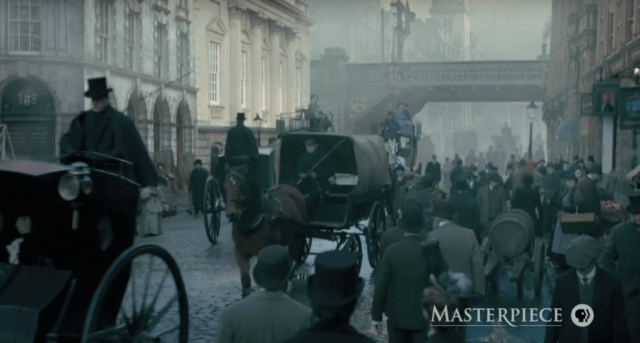 The opening moments of the trailer tell us what we’ve heard all along about the episode’s Victorian era London. It’s something we’ve never seen from Moffat’s Sherlock, and could present some new, intriguing conflicts for our characters, who before had leaned heavily on modern technology to drive the story. For the holiday special titled simply “The Abominable Bride,” it’ll be all horse-drawn carriages and fine suits for Benedict Cumberbatch and Martin Freeman. 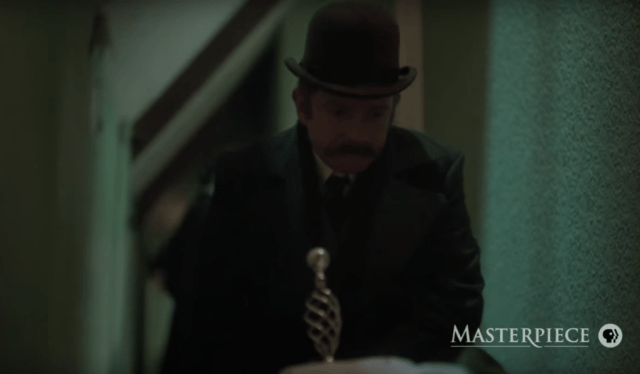 The opening moments of the trailer tease at an early death as one of the driving events behind the mysteries of “The Abominable Bride.” The first hint comes to us above, with what appears to be a knife or letter opener protruding from a dead body. Given that this is quickly followed by a woman chastising Holmes for not keeping his promise to keep someone safe, it looks like this may at least somehow be his fault. 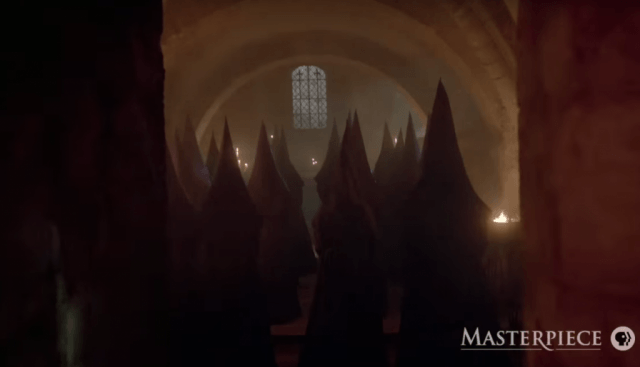 Who are the people wearing the Klan-esque point hoods? We can’t know for sure, but we wouldn’t surprised to find out about some sort of cult becoming a central cog in the mystery and intrigue of the episode. We later see what appears to be Holmes walking among the hooded figures, so it clearly won’t be long before our heroes happen upon them.

4. Is Sherlock about to shoot someone? 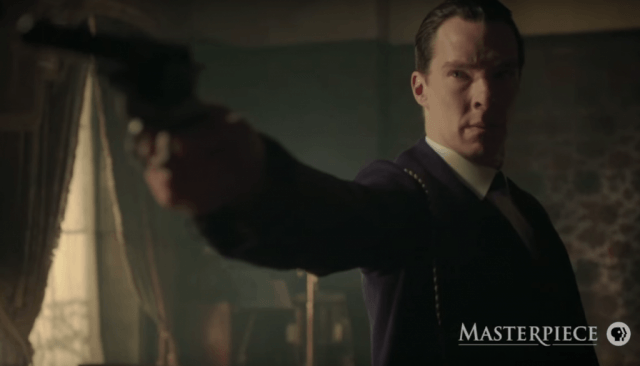 Our guess: probably not. It’s a well known fact in the novels that Holmes “redecorates” his flat at 221b Baker St. using gunfire, and based on the decor in the background, it looks like he’s doing the same here. That aside, it’s always strange seeing Sherlock brandish a weapon, when throughout the series he’s been more in favor of honing his intellect than inflicting physical violence. 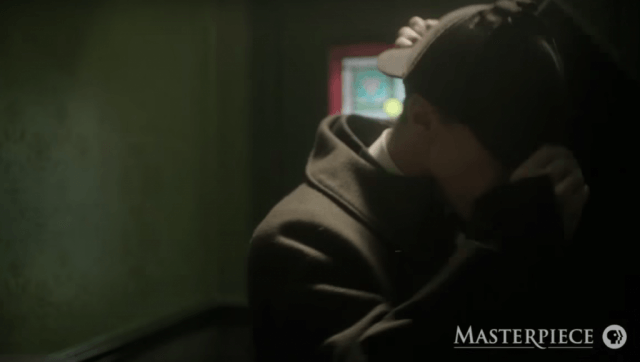 The final moments of the trailer call back to the modern-day setting of the series, in which Watson and Holmes shared a similar moment. In it, the duo were about to step outside to address a gaggle of photographers and reporters, with Watson shoving the iconic deerstalker cap into Sherlock’s chest with a simple explanation: “You’re Sherlock Holmes, wear the damn hat.” We see an identical exchange shared in the holiday special, acting as a nod to the modern series.

“The Abominable Bride” airs January 1, 2016 on BBC at 9 p.m., with an encore airing taking place January 10. Shooting for the fourth season of Sherlock will then commence in spring 2016, with both Martin Freeman and Benedict Cumberbatch signed on.