BBC’s Victorian ‘Sherlock’ Is Just What the Show Needs 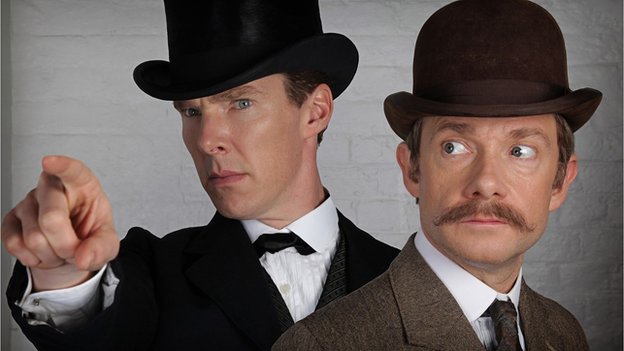 When it was announced over five years ago that the BBC would be moving forward with yet another adaptation of Sherlock Holmes, many were skeptical. This is a character from literature who’s been seen in virtually every form, from Robert Downey Jr.’s action movie version in 2009 to the cartoon rodent that starred in 1986’s The Great Mouse Detective. But the BBC’s adaptation, written by Steven Moffat and Mark Gattis, and starring Benedict Cumberbatch alongside Martin Freeman, surprised us all, becoming the seminal depiction of the mercurial detective.

The format of the show is less than typical, running in three episodes per season, with each functioning as its own separate movie of sorts at a runtime of 90 minutes. Due to production constraints involving actors and writers working on other projects, the gap between Seasons 1 and 2, and subsequently Seasons 2 and 3, was two years, giving fans plenty of time to wait. But the real victory of Sherlock was in the way it brought the character into the modern age. Computers, smartphones, and all manner of technology are woven directly into the plot, making for a Sherlock Holmes who manages to be far different from his predecessors.

This being so, it makes it that much more intriguing that for the Christmas special, set to air this December on the BBC, the episode will be set in none other than Victorian London for a story that Moffat claims is “not part of the run of three episodes.” We don’t quite know how that will play against the regular timeline of the show set in modern days. Holmes is known to take lengthy mental vacations in his “mind palace,” which could mean the special could take place entirely in (and outside) his own head.

The most appealing aspect of going back to the roots of Sherlock Holmes’s own time period runs deep in the show’s DNA. Its true claim to fame is bringing the classic character from literature into a climate rife with technology. Throwing him back in time for a single episode for a parallel plotline juxtaposes against this beautifully, making for a certain yin-and-yang quality that fits right in with Sherlock‘s main themes. On one hand, we’ve seen a show adapting old stories for the new world. Perhaps soon we’ll see this new perspective take us back to the old one.

The predominant theories from fans posit that the episode will jump back and forth between Victorian and modern times, which would further emphasize this juxtaposition. That being so, Moffat has been clear in stating the episode will operate as its own separate entity from the main story of the series. Of course, that doesn’t limit its ability to hop back and forth between time periods, but it certainly does allow for a self-contained 90 minutes that could be the most compelling thing you watch this Christmas season.

The true beauty of the BBC’s Sherlock is in its ability to innovate. For an individual episode to have ambitions this prolific, it appears as though that trend will continue on well into its future. What exactly that will entail remains to be seen, but this show has yet to lead us astray. We see no evidence that it’ll start doing that now.