Bill Paxton was the type of actor we tend to forget about. Though he routinely turned in stellar performances, he rarely made year-end “best of” lists. Though he racked up a few nominations for his work, he never really received the widespread acclaim that many of his contemporaries enjoyed.

Despite all this, his contribution to both film and television were essential throughout the 1980s, 1990s, and 2000s. There were his unforgettable early appearances in films like Terminator and Weird Science. And, he seemed equally comfortable as a supporting character in massive box office hits like Titanic and Predator 2, as he did in low-budget critical darlings like Nightcrawler. He appeared in some of the biggest films of all time, and was a convincing leading man in films like Twister. As of late, Paxton had carved out a name for himself with a new generation of TV fans with roles in Agents of SHIELD and the upcoming Training Day.

We knew his face. We knew his name. And we didn’t know how much we’d miss him. Bill Paxton passed away following complications from surgery on February 25, 2017 at the age of 61. Throughout his impressive, oft-underappreciated career, he stole scenes and helped make one-note characters come alive.

Here are 10 of Bill Paxton’s most memorable performances.

Bill Paxton wasn’t just an actor, he had a passion for filmmaking as well. And in 2001, his directorial debut, Frailty, hit theaters. The film follows Dad Meiks, a religious fanatic who believes God has commanded him to kill the human-like demons all around him — and who passes down his charge to his sons.

It’s a quietly disturbing film, one that contemplates the implications of blind faith and parental abuse. It’s also one of Paxton’s most chilling roles. We believe that Dad Meiks thinks he is doing right as he embarks on a murderous path, and that’s half of what makes the whole film so terrifying. Frailty flew under the radar when it first hit theaters, but with time it’s come to be seen as an underrated horror gem of the early 21st century.

Polygamy may not be mainstream, but it certainly made for great drama on HBO. From 2006 to 2011, Big Love followed the life of Mormon businessman Bill Henrickson and his three wives. In order for the series to work, the characters had to be relatable, even if their lifestyle wasn’t. And Paxton absolutely was. His Bill was humble, strong, demanding, and imperfect. He fought against his own weaknesses to be the man he thought his family needed. Paxton made Bill into someone we recognized, which was important, because in some ways Big Love was about how easy it is to miss the huge secrets that our friends, family members, and neighbors keep from us.

Big Love was often overshadowed by other HBO series of the time, like Six Feet Under, The Sopranos, and The Wire. But Paxton consistently turned in some of the most nuanced and understated performances of his career in his portrayal of Bill Henrickson.

Ron Howard’s epic historical drama, Apollo 13, got a new generation of movie fans excited about space travel. Unfortunately, it was a few decades too late. But the film, nevertheless, still serves as one of the more effective and stirring blockbusters of the 1990s, and that’s thanks in large part to the stellar performances from its ensemble.

Bill Paxton played Fred Haise, Apollo 13’s pilot, who falls ill during the crew’s aborted mission. Paxton fit seamlessly into the role. In every scene, you feel the weight that’s on Haise’s shoulders — the mounting frustration at the crew’s life-and-death situation, and his fierce dedication to his team. More importantly, you never doubt for a second that he’s a world-class astronaut, and that’s a true accomplishment for any actor.

Bill Paxton doesn’t get a ton of screentime in Titanic, but he plays a vital role in the film nonetheless. As Brock Lovett, the treasure hunter who tracks down the Heart of the Ocean, he’s in many ways the reason we get to hear Rose’s story in the first place. Throughout the film, Lovett serves as a sort-of leveling narrative driver — and as our surrogate. He gives us the backstory we need to dive into the story, and offers up moments of real levity when the tension becomes too much.

Paxton’s easygoing and occasionally gruff take on Lovett serves as a counterpoint to the often schmaltzy romantic drama that anchors the rest of the film. James Cameron worked frequently with Paxton throughout his career, and seemed to know exactly the type of roles the actor would thrive in — and his work in Titanic was no exception to that rule. 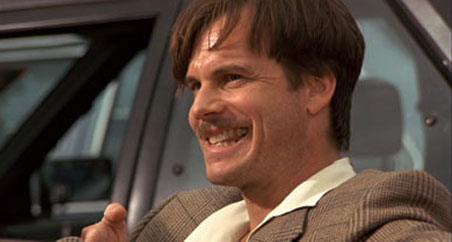 It can’t be easy to steal a scene from the Governator — his physical presence alone often dominates everything else on screen. But in True Lies, Bill Paxton did exactly that and more as Simon, a used car salesman trying to woo Arnold Schwarzenegger’s wife.

Simon’s scenes are among the most uproarious in a consistently funny film. His braggadocios behavior is slimy and the way he talks about women is abhorrent, so when he gets his comeuppance, it’s highly satisfying. Paxton never holds back in True Lies, and he forever raised the bar for future cinematic slimeballs.

In so many ways, Bill Paxton felt like a contemporary actor. But when given the chance, he fit right into historical backdrops, too. That was certainly the case with the 2012 miniseries Hatfields & McCoys. Paxton starred as Randall McCoy, whose bloody feud with Devil Anse Hatfield (Kevin Costner) made for one of the most notorious conflicts in U.S. history.

Paxton earned a SAG nomination for his portrayal of McCoy, which he infused with a nuance that helped humanize the legendary figure. While Hatfields & McCoys was an uneven outing at best for the History Channel, Paxton was both convincing and compelling every moment he was on screen, and helped to elevate an otherwise mediocre series. 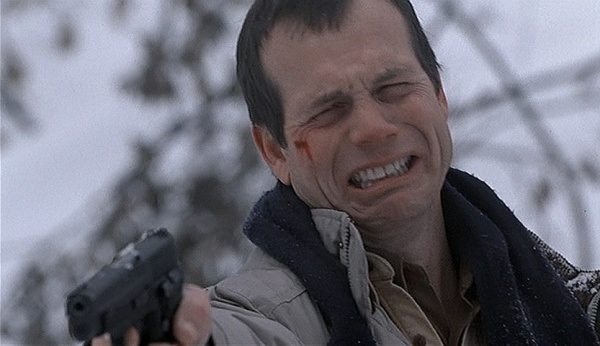 For much of his early career, Bill Paxton was charged with playing characters that were over-the-top and obnoxious. But that wasn’t all he was capable of — and he proved that with aplomb in 1998’s A Simple Plan. The quiet crime drama follows two brothers who come upon a grounded plane loaded up with money. Their lives unravel as they try to hide their discovery from the local authorities.

Paxton played Hank Mitchell, a quiet mill worker who can’t quite grasp the magnitude of how his life has changed. In the film’s most dramatic sequences, Paxton disappears into his characters’ skin and creates a man so sympathetic, and so tragic, that you can’t help but feel your heart break along with his.

Near Dark is a strange and wonderful vampire western from The Hurt Locker director Kathryn Bigelow. And it is memorable, thanks in large part to Bill Paxton’s exceptional over-the-top portrayal of Severen, the unhinged ringleader of a nomadic tribe of vampires. Severen is loud-mouthed, foul-mouthed, and uber-violent. He’s also in love with the power he commands over his fellow vampires and his prey.

In Near Dark, Paxton had the rare opportunity to really let loose and have fun with a role — and it showed. But he also made Severen scary by completely committing to bringing out his more psychotic side.

In some ways, it’s a shame that One False Move never quite found the audience it deserved. But for fans of the taut 1992 crime drama, co-written by Billy Bob Thornton, there’s a real sense of pride in knowing its worth — and in recognizing the stellar performance it rendered from Bill Paxton. The actor co-stars as Dale Dixon, an ambitious police chief who works with the LAPD to try to bring down the criminals that are hiding out in his small town. Dixon sees their arrival as an opportunity to prove himself.

Throughout the film, Paxton keeps his character carefully balanced — he’s eager, but not obnoxiously so. He’s kind, but clearly has his demons. One False Move is, in many ways, Paxton’s most overlooked film, a small story that he often carries almost entirely on his shoulders.

The best actors can show us multiple sides of a character — even if there seemingly aren’t that many there to begin with. That’s exactly what Bill Paxton did with his Aliens character, Hudson — a technician with a penchant for running his mouth. Throughout the film, Hudson served as a source of comic relief, thanks to his cocky attitude and wise-cracking personality.

Paxton earned a Saturn Award for his work in Aliens, a role that is for many film fans still his most memorable role. But what sometimes gets overlooked is that Hudson was so likable because Paxton made him more than just a punchline. Whether he was fighting valiantly against the film’s titular villains or delivering one of the most famous lines in sci-fi history (“Game over, man!”), Hudson felt like a real guy caught up in an incredible situation. And that’s entirely thanks to the authenticity Paxton brought to this and every other role he played.