Best Books Ever: 5 Stories Turned Into Movies, Comics, and More

Film, television, novels, and comic books all have a little something different to offer an audience. Television offers a longer term narrative for those with more time to invest but a shorter attention span. Film is more of a neat package of narrative when the story arc is by necessity succinct and without access material. Novels are the core of storytelling, where most stories are actually born, offering a whole different depth and experience (and yes, the book is usually better than the movie). And then there’s the graphic novel — a visual opportunity to focus on the dialogue in a story while actually getting to see what a character look like, or a work of art in its own right, depending on the quality of the imagery.

It’s quite common to see books turned into movies, and its certainly been the trend to see comic books translated into film. Comic book super heroes have started making their way into popular TV shows recently as well, and novels taking on comic book form actually happens more often than you’d think. But what isn’t terribly common is to find a story falling into either film or TV, as well as both comics and novels. It comes as little surprise that many of the books, movies, and comics falling into this impressive trifecta of media outlets are within the science fiction and fantasy genre. The only strong exception to that are classic novels, which oddly enough do tend to have their own version in graphic novel form — likely an attempt to get youths to read Candide despite the availability of Deadpool.

1. Do Androids Dream of Electric Sheep

Most people are familiar with the novel by Philip K. Dick, published in 1968, and whether they know to connect the two or not, many are familiar with the film Blade Runner, starring Harrison Ford and directed by Ridley Scott (1982). There are also rumors of a second Blade Runner film coming out which may or may not include Harrison Ford, may or may not include Ryan Gosling, but will definitely not be including the original director unfortunately. Instead, Denis Villeneuve will be taking over the project.

What many don’t know though, is that the original book can be read in its entire unabridged glory in the form of a graphic novel. That may not seem very impressive, but it’s unique to be able to read the full text of a novel in graphic format. Set in a future world where most of humanity has left the surface of the earth, the story follows a bounty hunter-like man across a cyber-punk landscape in search of murderous replicants.

Philip K. Dick’s works are apparently well designed for fitting multiple format — that or his works are just popular enough and plentiful enough to warrant funding across media forms, but either way, his book A Scanner Darkly also has found its way into a graphic novel and a movie.

The film, starring Keanu Reeves is made in a similar stylized animated format to Waking Life and includes a number of other big names, including Winona Ryder and Robert Downey Jr.. The story follows Bob Arctor as he worms his way in among a ring of drug users to bust the new booming trade. But to maintain his identity he is forced to use the drug, with dangerous mental side effects.

The Dresden Files books are not exactly high quality fiction, but they do have a strong enough fan following to have propelled the long running series into both the comic book form, and short lived television show in 2007 called The Dresden Files, starring Paul Blackthorne and Valerie Cruz. The series follows a modern day wizard living in Chicago and contending with all sorts of shenanigans connected with both his magic and his job as a private investigator.

This likely comes as no surprise. The highly popular books have been compared to Lord of the Rings in terms of their place in fantasy literature, and the television show is finishing up its fourth season following the fight for the throne and survival in the seven kingdoms. The comic book is less well known, likely because there can be too much of a good thing it turns out. The books are long enough, and the TV show still ongoing, leaving most fans well occupied without resorting to the illustrated pages of the comic book, but when you’ve reached that size and success level, there’s really no reason not to make a graphic novel. 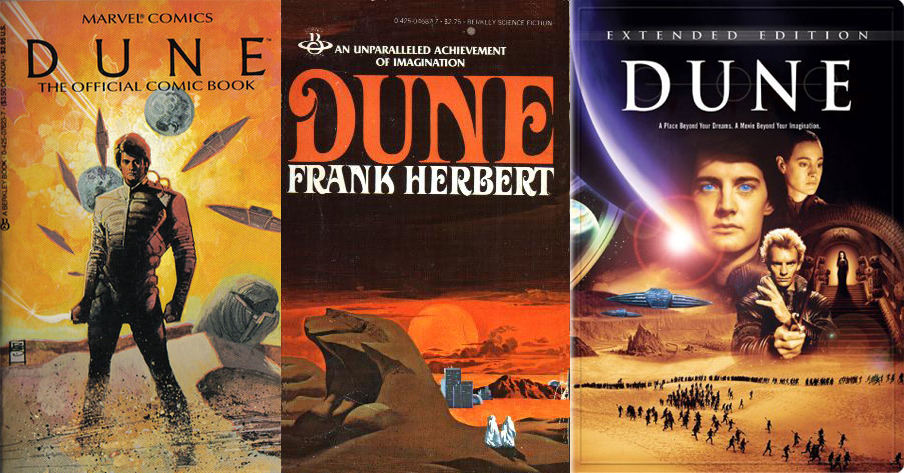 Frank Herbert’s book series, Dune is one of the most well known and beloved science fiction series ever published. It took the form of not one, but two separate mini-series, a movie, directed by David Lynch and starring a young Kyle MacLachlan, and a quasi-movie about a failed film adaption from the mind of Alejandro Jodorowsky. There is also a comic book that was actually made in the 1950s by Marvel Comics, making for a more interestingly dated version of the adaption. The story follows Paul, a duke’s son, as he moves to a desert planet where the mysterious “spice” is gathered for sale across the universe, and struggles with the power dynamics and customs of the planet, as well as his own fate.