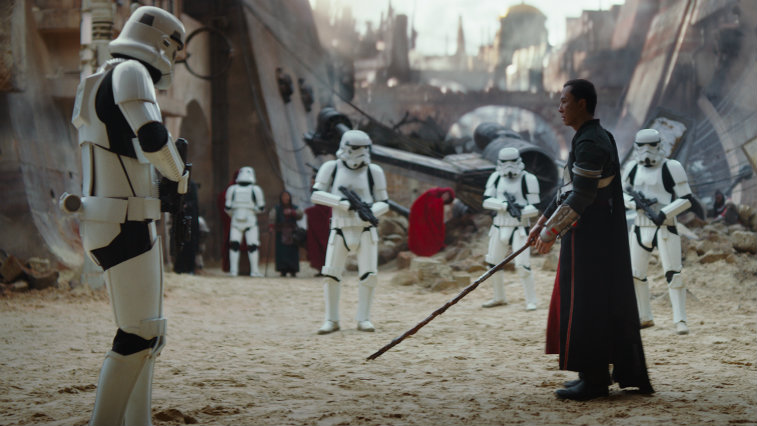 Even though modern movie trailers have taken heat in recent years for leaving nothing to the imagination, they are still the best way to get people hyped up and talking about an upcoming film. Just to get a sense of how much of an event a trailer can be, look no further than the trailer for Star Wars: The Force Awakens, which was viewed 112 million times in just 24 hours. While The Force Awakens could have arrived in theaters without little more than a press release and likely broken all the same records, it goes to show that a trailer has in recent years become nearly as exciting as the film itself. [Update, 9/16/16: Per Deadline, the first trailer for ‘Fifty Shades Darker’ (the sequel to last year’s ‘Fifty Shades of Grey’) has already been viewed 114 million times in 24 hours, breaking the record previously held by ‘The Force Awakens’.]

A good trailer can also raise the stock of a film no one knew they wanted to see (read: Deadpool) while a bad one can threaten to stymie any momentum (read: Ghostbusters). So what are the trailers that have had people talking in 2016? In a year that’s featured some fantastic trailers that have amped us up for summer releases or the films yet to come, here are the 10 best trailers of 2016 (so far).

Starting off the list is Terrence Malick’s IMAX documentary Voyage of Time, which will guide viewers through the story of life and the universe. Anyone familiar with Malick’s work will know that his narrative films often contain some of the most beautiful, awe-inspiring images of nature (an obsession of Malick’s that has certainly earned him some criticism) and Voyage of Time allows the director carte blanche to show us all the kinds of images meant for IMAX in a way only he can.

Popstar: Never Stop Never Stopping is a musical mockumentary from comedy trio The Lonely Island, which is composed of Andy Samberg, Akiva Schaffer, and Jorma Taccone. The comedy specifically targets musical documentaries such as Justin Bieber: Never Say Never in the hilarious trailer that introduces us to the world of singer Conner4Real and the people around him.

Sausage Party is an R-rated animated comedy about a sausage and his friends who embark on a journey to escape being eaten. Featuring the voices of Seth Rogen, Kristen Wiig, and Jonah Hill among many others, the trailer introduces us to what seems like a normal children’s animated film before suddenly turning violent with foul-mouthed language. And as expected, we have at least one example of a movie theater playing the trailer before a children’s film by mistake, which means the film can already be deemed a success.

Video game adaptations justifiably have an awful reputation when making the big-screen plunge, so it went without saying that Assassin’s Creed felt destined for failure even as it piled up talented actors like Michael Fassbender. But the trailer has not only reversed opinions on the upcoming film; it has led to buzz that this could finally be the video game film that breaks the curse. Give a lot of credit to the film’s talented young director Justin Kurzel (Snowtown, Macbeth) because of all the video game adaptations that could work, it didn’t seen possible that the one to break through might be about a modern-day criminal who is forced to live through the memories of his ancestor during the Spanish Inquisition.

After Matt Damon left the Bourne series and we got the meh Bourne Legacy, most people didn’t think we needed any more Bourne in our lives — boy were we wrong. With Damon returning to the series along with director Paul Greengrass (The Bourne Supremacy, The Bourne Ultimatum), the first trailer for Jason Bourne manages to ramp up the series’s trademark action and remind us how good we had it when this series ruled the action landscape.

The long-awaited film adaptation of Marvel’s Doctor Strange has been one of the most anticipated new superheroes to be introduced to the Marvel Cinematic Universe, and the trailer released in late spring did not disappoint. Featuring fan-favorite Benedict Cumberbatch in the title role along with Tilda Swinton, Rachel McAdams, and Mads Mikkelsen, the trailer for Doctor Strange features jaw-dropping visuals reminiscent of Christopher Nolan’s Inception and feels like yet another interesting creative step forward in the MCU.

4. Fantastic Beasts and Where to Find Them

While the so-called “announcement trailer” for Fantastic Beasts and Where to Find Them in December certainly did its job in getting people excited for the next cinematic adventure in J.K. Rowling’s wizarding world, it wasn’t until the film’s first teaser that we truly got a glimpse of why we should be excited for this Harry Potter spinoff. Eddie Redmayne stars as Newt Scamander in 1926 — some 70 years before the events of the Harry Potter series — and will, for at least some of the film, be bringing the magic to New York City. The trailer not only feels very much in the spirit of the Harry Potter films, but the added aspect of experiencing the wizarding world in a period-piece is intriguing to say the least.

Captain America: Civil War managed to hit it out of the park with two straight trailers, but it was the second one that truly had fans ready to storm theaters on release because of who it revealed: Spider-Man. Sure, the extended fight sequences were great too, but it all it took was Spider-Man pulling Captain America’s shield from his hands via web with a deadpan “hey everyone” for everyone to be sold.

2. Rogue One: A Star Wars Story

The fact that the trailer for Rogue One: A Star Wars Story is No. 2 shows you that this has been a particularly exciting year when it comes to trailers. After the release of last year’s The Force Awakens, all eyes and ears moved to Rogue One, which tells the story of the group of spies tasked with stealing the Death Star plans that begin the plot of Star Wars Episode IV: A New Hope.

While expectations were incredibly high, Star Wars fans also didn’t know exactly what to expect from Disney’s first spinoff film. But following the trailer’s release, which shows many of the classic elements from the original trilogy, it’s safe to say that the excitement for the film is through the roof. And when Darth Vader inevitably arrives in one of the film’s later trailers, expect the film’s buzz to approach what we saw with The Force Awakens.

Considering the problems that the DC Universe has experienced this year with Batman v Superman: Dawn of Justice, it’s a testament to how exciting Suicide Squad looks that the film still remains one of the summer’s most anticipated films. One of the keys to how the film has managed to fuel an immense amount of a buzz is its trailer campaign that has perfectly matched (as far as we can tell anyway) the insane, zany tone of the source material.

This was perfectly captured in Suicide Squad‘s first official trailer, which blends humor and action to Queen’s “Bohemian Rhapsody.” Whoever was in charge of the trailers — and that one in particular — deserves a huge raise as the trailer quickly went viral and led to renewed buzz for a film that had had it’s fair share of criticism based on early looks.