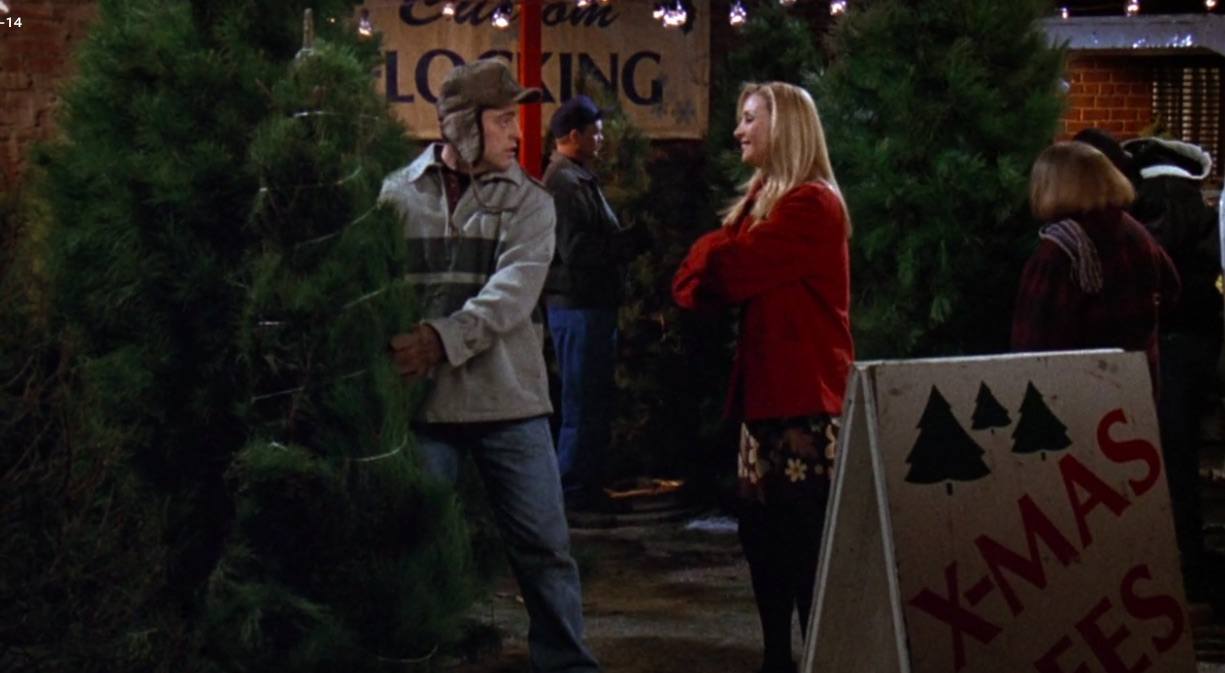 NBC’s hit series, Friends has some of the best TV show Christmas episodes. | NBC via Netflix

Friends is without a doubt one of the most festive television series ever. Not only do they celebrate Thanksgiving nearly every season, but Monica, Chandler, Ross, Rachel, Phoebe, and Joey always end up doing something for Christmas, too. With nine episodes to watch, choosing the best Friends Christmas episode is quite a challenge. However, there is one episode that exceeds all others with Christmas spirit. Season 7’s The One With The Holiday Armadillo episode is the best Friends Christmas episode.

In the episode, Ross tries to teach his son, Ben about Hannukah and decides to dress up to make the lesson more exciting. However, the only costume available was an armadillo, so Ross dresses up as the “Holiday Armadillo,” aka Santa’s half-Jewish friend (like Ben). Then, Chandler steals his thunder and shows up in a Santa Claus costume. At first, Ross was upset, but then they end up working together to teach Ben about the holidays he celebrates. Joey also shows up in a Superman costume because, well, it’s Joey.

The Seinfeld Christmas episode to watch is season 9, episode 10 — better known as The Strike. This is the episode where the infamous holiday of Festivus was introduced. A lot happens in this episode, starting with a card from George’s father that reads “Happy Festivus,” aka the holiday he made up. When Kramer learned of Festivus he becomes, of course, fascinated and wants to know more, so he meets with George’s father to learn everything.

Meanwhile, George hands out cards at work asking for donations to The Human Fund, a fake charity he made up to avoid buying gifts for his co-workers. In light of the holiday season, George’s boss makes a large donation but then finds out that the whole thing was a fraud. In true George fashion, he says he celebrates Festivus and didn’t want to be “persecuted for [his] beliefs.”

Seinfeld and Friends aren’t the only popular television series with festive holiday episodes. Keep reading for the best TV show Christmas episodes on Netflix and Hulu.

For a festive holiday throwback, turn on Full House’s season 2 Christmas episode, Our Very First Christmas Show. The 9th episode is available to stream on Hulu.

It’s Always Sunny in Philadelphia fans can get in the holiday spirit with season 6, episode 14, It’s a Very Sunny Christmas on Hulu.

Get in the holiday spirit with Seth Cohen’s very own holiday, Chrismukkah. The O.C. has many Christmas episodes to choose from, but the best one is arguably The Best Chrismukkah Ever. Watch season 1, episode 13 now on Hulu.

Will & Grace might have new episodes to watch, but nothing beats the throwbacks. This holiday season, tune into one of the series’ best Christmas episodes, Jingle Balls on Hulu.