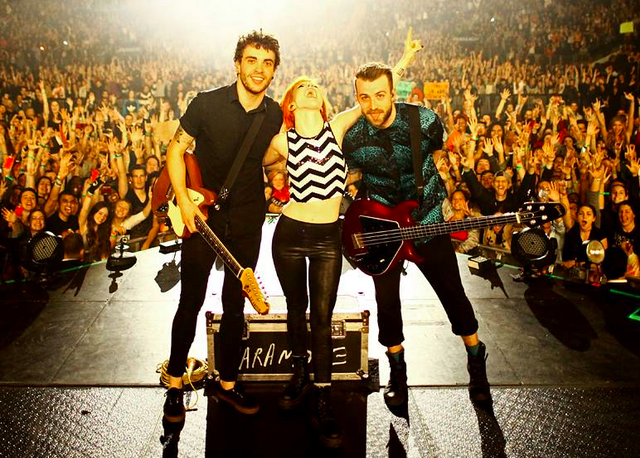 This week in the Billboard Hot 100 charts, John Legend’s “All of Me” from his album of the same name kept its lead over Pharrell Williams’ “Happy,” which dominated the charts for most of the spring. Rapper Iggy Azalea is also continuing her winning streak from last week, with her single “Fancy” rising to No. 3, the highest position the song has occupied. Right behind it is Ariana Grande’s “Problem” — which also features Azalea — that debuted last week at No. 3.

The remainder of the charts stayed fairly steady from last week, with the only new song emerging in the top 10 being Paramore’s “Ain’t It Fun,” which rose to No. 10 from No. 13. “Ain’t It Fun” comes from the pop-punk band’s self-titled third album, which sees the group leaning more toward pop sensibilities than previous efforts, something that perhaps explains why “Ain’t It Fun” has been the highest-ranking single of the group’s career.

“‘Ain’t It Fun’ is very different from songs we’ve written in the past,” Paramore lead singer Hayley Williams said in an interview with Billboard magazine earlier this month. “I grew up on pop, funk, and soul. We really got to show off our roots in this song.” Despite the move toward a more commercial sound, Paramore considers itself a rock band that decided to make a pop record rather than a group that some have criticized as becoming more and more like a back-up band for Hayley Williams’ pop career.

The biggest rise was seen by Jason Derulo’s “Wiggle” featuring Snoop Dogg, which went from No. 68 to No. 24 during its second week on the charts. “Wiggle” looks like it will be the R&B singer’s next big hit as “Talk Dirty” featuring 2 Chainz has continued to slide down the charts, this week falling from No. 6 to No. 7. The next biggest jump was seen by country singer Blake Shelton’s “My Eyes” featuring Gwen Sebastian, which rose from No. 97 to No. 57. The Canadian rock band MAGIC!’s reggae-influenced single “Rude” sounds like it could be a summer anthem, climbing steadily from No. 62 to No. 39.

It seems to be a good week for country music, as several country songs are moving up the mainstream charts and competing alongside generally more popular rap and pop music. Aside from Shelton’s “My Eyes,” a couple of other new country singers are seeing singles move up the charts. Justin Moore’s “Lettin’ the Night Roll” moved from No. 73 to No. 56 and Joe Nichols’ “Yeah” went from No. 94 to No. 87.