In a new 50 second video released on Friday, Netflix unveils all of the episode titles for the upcoming season, and each one is accompanied by a short clip. The episodes that will make up season four are “Crocodile,” “Arkangel,” “Hang the DJ,” “USS Callister,” “Metalhead,” and “Black Museum.”

With “Crocodile,” we see a woman driving through a snowy landscape, a woman looking concerned at an old monitor, and a woman looking out blinds as police apparently approach. While most Black Mirror episodes revolve around one character, this one seems like it will focus on three. “Crocodile” will be directed by John Hillcoat (The Road, Triple 9).

“Arkangel” is a mother-daughter story, with a young child being disciplined by her mom and with a tablet at the center of things. This one is directed by Jodie Foster. In addition to her work in front of the camera, Foster has previously directed Home for the Holidays, Little Man Tate, The Beaver, and Money Monster.

With “Hang the DJ,” we see a young man and woman with what appears to be a game of some sort, which they are apparently playing with on a date. The title is a reference to The Smiths’ song “Panic,” which feature the lyrics “hang the DJ.” This episode is directed by Tim Van Patten, who previously directed episodes of Game of Thrones, Deadwood, Rome, and The Sopranos.

“USS Callister” is the episode generating the most attention among fans, as it is clearly inspired by Star Trek. In it, Jesse Plemons plays the captain of a ship reminiscent of the USS Enterprise, and something goes wrong with the crew, as a woman on the ship, played by Cristin Milioti, is seen screaming and looking at her glowing hands. This would be the first Black Mirror episode to not take place on Earth, unless of course it’s really a simulation or a show-within-a-show. “USS Callister” is directed by Toby Haynes, who previously worked on episodes of Doctor Who and Sherlock. 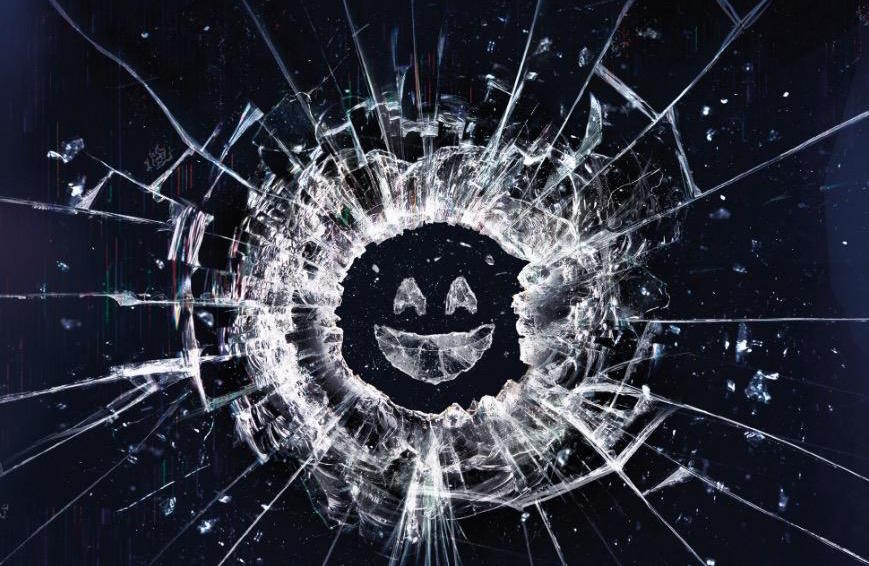 “Metalhead” appears to be the first Black Mirror episode shot entirely in black and white, and it seems to center around a walking robot. A woman is seen running away and getting in a car chase, though it’s not clear who might be chasing her and why. This episode will be directed by David Slade (Hard Candy, 30 Days of Night).

Finally, “Black Museum” seems to center around a woman who goes to visit a museum, but things spiral out of control, and a man is seen being carried out on a stretcher. At one point, the museum patron is seen looking at a model brain covered in some sort of glowing blue helmet, and later, a woman is seen wearing that helmet in bed. This is apparently the episode based on an idea by Penn Jillette, in which case it will be about a device that you can put on your head in order to feel someone else’s pain. This episode is directed by Colm McCarthy (The Girl With All the Gifts).

Every episode of Black Mirror season four is written by the show’s creator, Charlie Brooker. The new batch of episodes is expected to be released this fall. No release date has been officially announced, but if season four comes out around the same time as season three, it will be made available on Netflix in October.