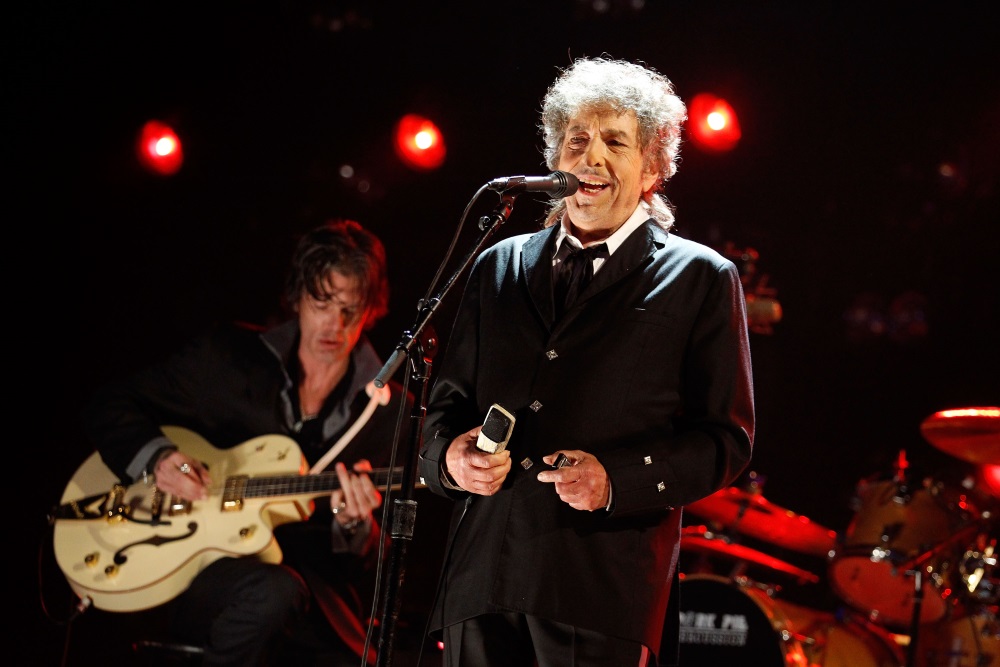 1969′s Nashville Skyline was Dylan’s controversial immersion into country music at a time when psychedelic rock and hippie political activism were at their peak. An extension of the styles explored in John Wesley Harding, Nashville Skyline is responsible for many of Dylan’s best contributions to country music, including the “Lay, Lady, Lay,” which is thought to be one of his sweetest love songs. Country is the genre where we often find Dylan at his most tender, where his love songs are stripped of tragedy and sarcasm. In the hands of a lesser writer this would make for sappy cliches, but in Dylan it exposes us to another rich, more sincere facet of his songwriting.

Another sentimental love song, this time from the 1970s New Morning, “If Not For You” is significant since George Harrison covered the song for his own album All Things Must Pass and the two performed it as a duet in rehearsals for the Concert for Bangladesh in 1971, though Harrison played it alone at the concert itself. Olivia Newton-John later had a hit with it, removing the acoustic, rootsy feel of Dylan’s original.

This outtake from Dylan’s reclusive period in the wake of his 1966 motorcycle accident was first released on 1971′s Greatest Hits Vol. II. “Whooee ride me high / tomorrow’s the day my bride’s gonna come / Whooee we gonna fly / down in the easy chair,” Dylan sings. This song features all the sentimentality and hope and urgency of a great Dylan love song, but retains some of his weirdness, too, with lyrics about Genghis Khan and collecting guns and flutes. One of Dylan’s more beloved B-sides, Old Crow Medicine Show and the Byrds have covered it.

This song from 1967, John Wesley Harding, which marked Dylan’s musical comeback after his motorcycle accident and subsequent withdrawal from the limelight just as the 1960s was reaching social and political highs, signals the country-influenced direction he would take with Nashville Skyline. A sexy love song in which Dylan tries to seduce his love object by promising to be her baby tonight, the song has honky-tonk guitar and a sappier, more sincere vocal than found on the previous record, Blonde on Blonde. At the time, many fans weren’t sure how to respond to a happy Dylan, but both John Wesley Harding and Nashville Skyline provided some of Dylan’s best country songs and a new direction for his songwriting.

5. ‘Lily, Rosemary, and the Jack of Hearts,’ Blood on the Tracks

This song from Dylan’s famous post-divorce album is a nearly nine-minute western-style ballad over country backing that tells a long and complicated story similar to songs like “Desolation Row,” but with a country spin. The story of a deadly love triangle takes place in a gambling joint straight out of the wild west, with the metaphor of card games evoking questions about fate, chance, and what it means to bluff. This is a one of Dylan’s long, fictional story songs, different from the personal love songs that comprise most of this list.

Dylan revived his 1963 song “Girl From the North Country” with country legend Johnny Cash as a duet partner for Nashville Skyline. Dylan’s voice sounds completely different on the later version of the song, and he and Cash don’t make the most melodic of duet partners, but their version of the song takes it from hardcore traditional folk to country and is the most famous version of “Girl From the North Country,” which has since been widely covered.

7. ‘Tonight I’ll Be Staying Here With You,’ Nashville Skyline

Another love song from Nashville Skyline, here Dylan is no longer restlessly searching for perfect love or tempted by the train whistling outside his window like Hank Williams’ ramblin’ man. Dylan can throw his suitcase away and his train ticket out the window because he’s finally found a woman worth staying put for. Country artists including Johnny Cash and Gillian Welsch have covered the song.