‘Breaking Bad’ Director May Be Perfect for ‘Wonder Woman’ 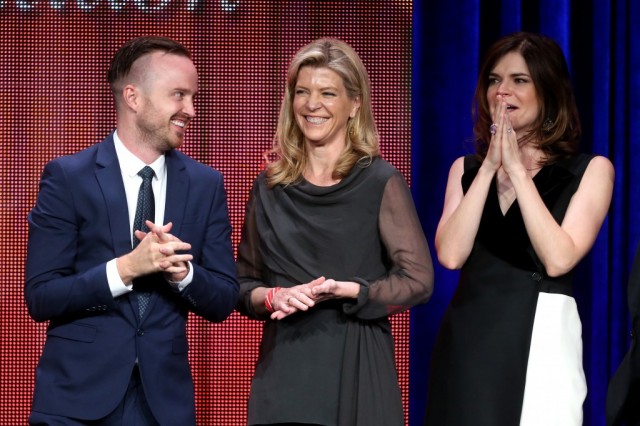 Warner Bros. may have just found a director for its upcoming Wonder Woman film. The studio is reportedly narrowing down options for the coveted job and one name has officially become the frontrunner: Breaking Bad director Michelle MacLaren.

According to The Wrap, MacLaren (seen above with Breaking Bad stars Aaron Paul and Betsy Brandt) is currently the top choice to take on the highly anticipated superhero flick. News of her possible connection to the movies comes just days after The Hollywood Reporter first reported that the studio is seeking a female filmmaker to lead the project. Since then, several other contenders have been speculated over along with MacLaren, including the likes of Kathryn Bigelow (Zero Dark Thirty), Tricia Brock (Girls), and Catherine Hardwick (Twilight). Lexi Alexander, who directed Punisher: War Zone, was also mentioned as possible director for the film, but she quickly nixed the possibility.

“Imagine the weight on my shoulders. How many male superhero movies fail? So now, we finally get Wonder Woman with a female director; imagine if it fails,” Alexander told The Fast Company in a recent interview, adding that whoever takes on the job will carry the “weight of gender equality for both characters and women directors.”

Blockerbuster superhero films carry high expectations as is, but the director of DC Comic’s Wonder Woman will have the added pressure of finally bringing the modern female superhero solo film that fans have long since been clamoring for to screen. Still, MacLaren seems like a more than solid candidate for the position, given her extensive history in hugely successful television hits.

While Wonder Woman would mark MacLaren’s entry into feature films, the director has an impressive resume behind her. She won Emmys for her work on of Breaking Bad, for which she directed 11 acclaimed episodes and also served as an executive producer on. She has also previously directed several episodes for The Walking Dead and Game of Thrones, and helmed one installment for HBO’s The Leftovers. Earlier in her career, she also served as an executive producer on The X-Files. Most recently, MacLaren directed an episode of the upcoming Breaking Bad spinoff Better Call Saul. Given the cinematic quality of those shows — and their tendency to combine elements like action, science fiction, and fantasy (all of which have a place in good superhero films) — it seems MacLaren could be the ideal candidate for the project.

Though MacLaren is currently at the top of the studio’s shortlist of contenders, her attachment to the film isn’t a done deal yet. Several other directors — not all of whom are female — are also reportedly in consideration, but MacLaren appears to be the favored choice. It remains unclear if negotiations have started yet.

This wouldn’t be the first time a studio has successfully recruited directors from the small screen to helm their comic book adaptations. DC Comic’s rival Marvel enlisted Alan Taylor, another Game of Thrones vet, to helm Thor: The Dark World and Community directors Joe and Anthony Russo for Captain America: The Winter Soldier.

Official plot details for Wonder Woman have yet to be released. The film will star Gal Gadot, who will make her first appearance in the role in next year’s Batman v Superman: Dawn of Justice. Wonder Woman is slated for release on June 23, 2017.